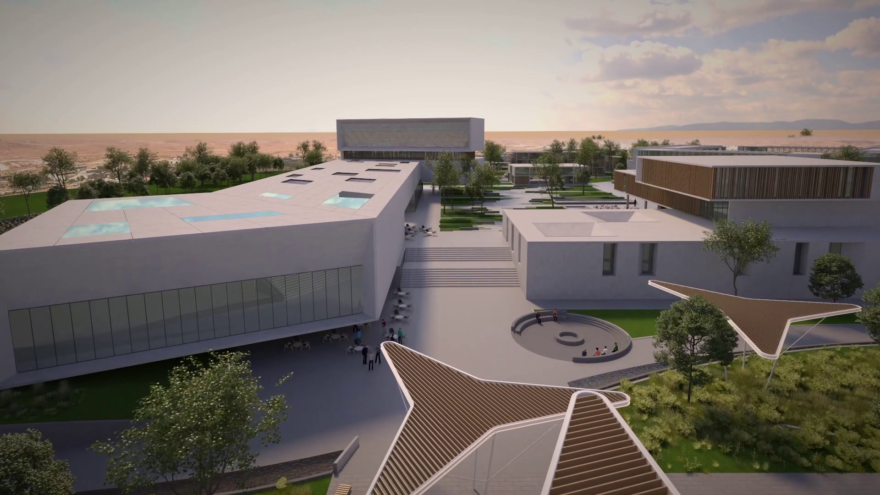 (December 1, 2022 / JNS) The Jewish National Fund-USA has announced what it calls its largest project yet.

At its national conference earlier this month, the organization shared plans to establish the World Zionist Village in Beersheva, along with a second campus of the Hod Hasharon-based Alexander Muss High School in Israel (AMHSI).

The project was presented to attendees at the conference in Boston during a session on Nov. 6 led by JNF-USA National First Vice President, Joseph Wolfson, a Philadelphia-based attorney. He called the project the most ambitious, audacious and daring in JNF-USA’s history.

AMHSI takes about 1,500 high school students per year to Israel for an immersive Zionist study abroad program. Wolfson said that this number is no longer enough and the school is at capacity. Thus, JNF-USA’s goal is to build a “village” that will allow the high school to expand its reach to 5,000 American and international high school students.

The village will bring these students together with other young people in Israeli society, including those in pre-military academies (mechinot), students on their gap year and those working at the many high-tech internships offered in the southern city of Beersheva—all housed in a “first-class facility.”

“They will live and learn together, developing an unbreakable bond, as they learn about Diaspora Jewry, Israeli life, our shared history and importantly, a joint future,” said Wolfson.

Postgraduates will live in apartments for up to a year while they work at some of the area’s companies such as Intel, Dell, Wix or those in the biomedical field. Other accommodations will house adults, such as retirees, going to Israel to experience Beersheva. In addition, there will be a 75-room conference center and guest house to bring people from all over the world, such as synagogue tour groups.

“Together, we will make the desert bloom and create Zionism 2.0,” Wolfson said.

The massive project is expected to cost $350 million and sit on 10-15 acres. An additional $100 million endowment will be raised to provide for upkeep and operations.

Wolfson said that the JNF-USA subcommittee that is managing the project has conducted due diligence to make sure it is being done the right way, with thoughtful planning. The subcommittee hired DBI Projects, a global capital project management firm, to lead the process.

DBI Projects managing partner Ofer Ohad and project executive Jonah Stern were on hand to present on behalf of their company.

“We are very honored to work on this project,” Ohad said. “It just happens to be that I am originally from Beersheva, so this project means a lot to me.”

Ohad said that DBI Projects’ role will be to vet, refine and align the work the subcommittee created over the past few years and turn it into a master plan with a budget, schedule, cash flow, design intent and documentation to allow the project to move ahead. The company has been working with JNF-USA since May and is ready to present a project direction.

Stern said the campus would have a number of spaces to host programs for visitors and Beersheva residents, as well as dining and wellness spaces, outdoor and indoor recreational areas and a food and beverage program.

“First and foremost, we understood that functionality was paramount: the notion that the campus must be robustly built, must be easy to maintain, must be easy to operate long into the future, as well as being sufficiently flexible to accommodate changes in program over time,” Stern said. “The notion of placemaking, that when you are within the village the design has to reinforce that sense of identity and belonging. It needs to be a distinct environment.”

Ohad said that the project is expected to start in 2023 with the master plan, building designs will be developed in 2024 and construction will start in 2025. This schedule will allow the World Zionist Village to open and start operating by early 2028.

Wolfson emphasized that no final decision has been made and that the subcommittee is continuing its thorough process. Part of the process already occurred during the past year, when more than 70 focus groups were convened and 1,200 individuals were interviewed. These focus groups were facilitated by Moshe Samuels, creator of the Israeli TV show “The New Jew.”

“We listened, we learned, we adapted and we found that the world is ready for our next, greatest Jewish conversation,” Wolfson said.