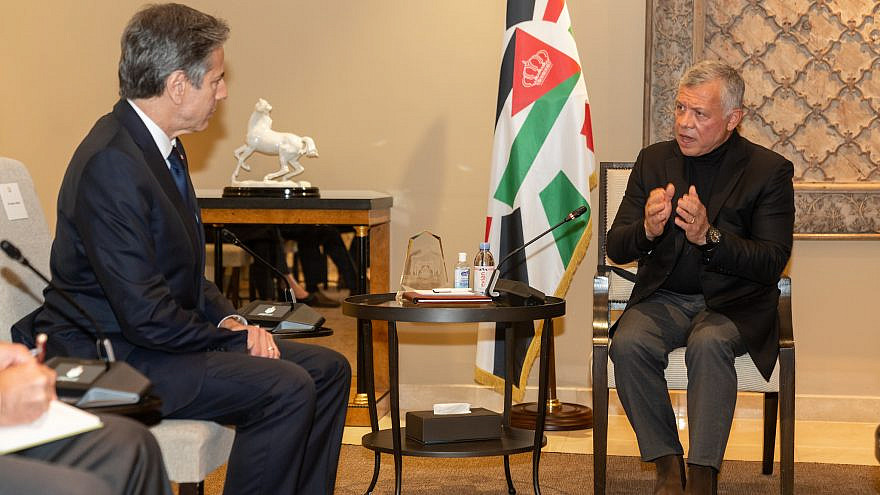 (June 2, 2021 / JNS) As the fallout from the latest Israeli conflict with Hamas in the Gaza Strip continues, Israel’s Defense Minister Benny Gantz has spoken repeatedly in recent days of the need to strengthen a “coalition of the pragmatic in the region,” which includes Jordan.

Gantz departed on Wednesday for the United States to discuss regional security with American defense officials in the wake of the ceasefire that took hold on May 21.

“The first reason is the war on terror,” stated Shay, a senior research fellow at the International Institute for Counter-Terrorism, who also served as the intelligence officer for the IDF’s Southern Command.

“The facts speak for themselves. The Jordanian border, which is the longest border that Israel has, is to our fortune a border in which terror incidents are extremely rare. This is to a great extent due to the efficient operations of the Jordanian security forces that have been working for decades in coordination with Israel and have been able to keep this border as quiet as possible,” he explained.

A second, broader more strategic consideration, added Shay, is the vital role that Jordan plays in acting as the eastern security zone that blocks out the Iranian threat from approaching Israel.

In light of the fact that the United States is intending to withdraw from Iraq, where Iran maintains a massive presence, and the Iranian presence in Syria, which Israel is battling to reduce on a regular basis, “it is difficult to overstate the importance of Jordan as a country,” said Shay. “Should it come under Iranian influence and infiltration, this would represent a severe development.”

Jordan is preventing an Iranian takeover of Israel’s eastern flank, making it a key strategic asset, he said.

“Jordan and Iran are fully hostile to one another. From Jordan’s view, Iran is a severe threat. Until 2018, Jordan has to deal with two large threats. One was ISIS, which threatened to spread out from its area of control in Iraq and Syria to Jordan, and the second is Iran,” said Shay.

“Now the ISIS threat has decreased very much and mainly remains in the form of terrorism. But Iranian ambitions for regional hegemony remain in place, and today, this is a central threat for Jordan,” he added.

The Islamic Republic would like to see the toppling of the Hashemite Kingdom, which it views as a “U.S. collaborator,” and which forms an obstacle to Iran’s takeover ambitions due to its peace treaty with Israel.

“From this perspective, Jordan does not meet the Iranian criteria in the region. Tehran would prefer a regime that will be friendly to it, not to the U.S.,” said Shay.

Under a different regime, Jordan could serve as a conduit for Iranian infiltration efforts into the West Bank, and Tehran could start injecting its destructive influence and terror financing funds into this area, too.

‘Relations are not in a vacuum’

Asked to address recent diplomatic crises between the Israeli government and Jordan, Shay said that Amman’s top priority is survival and domestic stability. “Anything that undermines that is not in its interest—and I’d add, not in Israel’s interest either. At the same time, relations are not in a vacuum. They are affected by Israeli-Palestinian developments. When tensions with the Palestinians rise and divisions emerge, this naturally projects onto Israeli-Jordanian relations,” he said.

Roughly 60 percent of Jordanians are of Palestinian origins, according to some estimates. The Kingdom also contains an Islamist opposition movement.

Shay said “one must recall that within Jordan, there is quite a bit of opposition to relations with Israel. Hence, when tensions rise here, this creates tensions in Jordan domestically, in addition to the external pressure it faces.”

As the latest Gaza conflict and violence in Jerusalem demonstrates, local eruption points are practically guaranteed on a regular basis.

Still, both Israel and Jordan “have learned how to get over these and safeguard what is truly important,” stressed Shay.

Asked if he thought that Jordan’s stability is secure, Shay replied that since the 2011 wave of revolutions in the Middle East, it is “no longer possible to say that anything is secure. But I hope that the Hashemite Kingdom will maintain its ability to protect itself.”

Israel, he said, should contribute to Jordan’s stability through assistance with economic issues and core infrastructure problems. In April, Israel reportedly agreed to increase the amount of water it supplies to Jordan beyond the quantity stipulated in the 1994 peace treaty.

“It’s in the interest of both sides to maintain this relationship,” said Shay. “The more stable relations are, the more both sides will reap the benefits.”