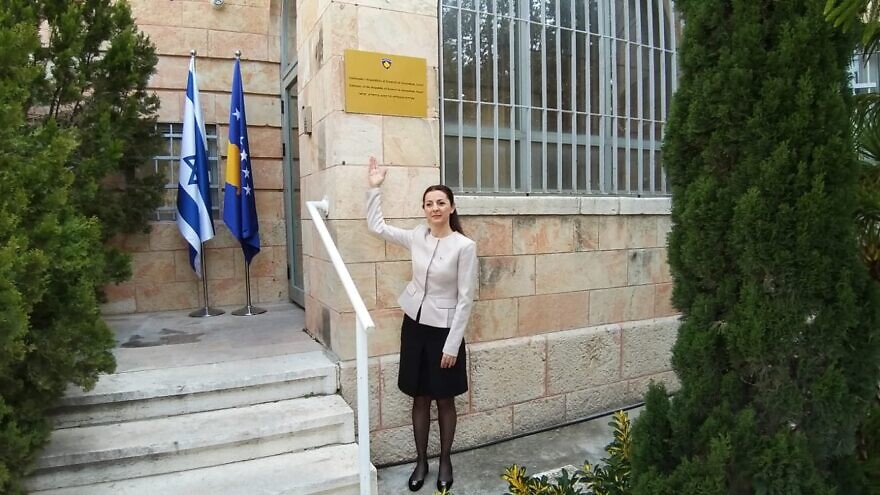 (September 17, 2021 / JNS) After more than 10 years of covert relations, the State of Israel and the Republic of Kosovo agreed to establish formal diplomatic relations on Sept. 4, 2020. In September and early October of last year, former Foreign Minister Gabi Ashkenazi said he was looking forward to the next celebration with Kosovo to be held in Israel.

Nevertheless, during the global pandemic, diplomatic relations were formally established between Israel and Kosovo on Feb. 1—not in person, but online. On March 14, the Republic of Kosovo opened its embassy in Jerusalem.

One year after the establishment of official relations, Ines Demiri, the chargé d’affaires of Kosovo, posted in Jerusalem, spoke with JNS in the Kosovo embassy for an exclusive interview. With its large blue-and-yellow Kosovo flag flying outside, the embassy is rather unique, being located on a major Jerusalem thoroughfare in contrast to other international embassies in Jerusalem, which are in much less noticeable locations.

Demiri’s arrival in the midst of a pandemic with lockdowns and restrictions has added challenges to her role in representing her country with its more than 95 percent Muslim population. According to its constitution, Kosovo is a secular state and by law offers freedom of religion. “My family members were involved with partisans fighting against fascism, and my Albanian grandfather and grandmother took in survivors. There is a deep and enduring story in the Balkans and Kosovo,” explained Demiri. However, during the Kosovo-Serbia fighting, many Jews left with a significant number moving to Israel.

Fewer than 100 Jews now live in Kosovo, but they are an active community, according to Demiri.

Serving in New York City for four years, prior to her posting in Israel, she made good connections in the United States. Yet her first trip to Israel to attend a diplomatic seminar for Young Jewish Leadership in the summer of 2011, sponsored by the Israel Ministry of Foreign Affairs, proved “an exceptional experience, and with representatives from 42 countries, it was a great introduction to diplomacy.”

After spending half a year in Israel, she sees tourism, water, agriculture, and economic and academic exchanges as the general areas that can benefit both countries. Demiri also plans to work more with Yad Vashem, believing there is much to share not only about Jews but also with Righteous Gentiles. 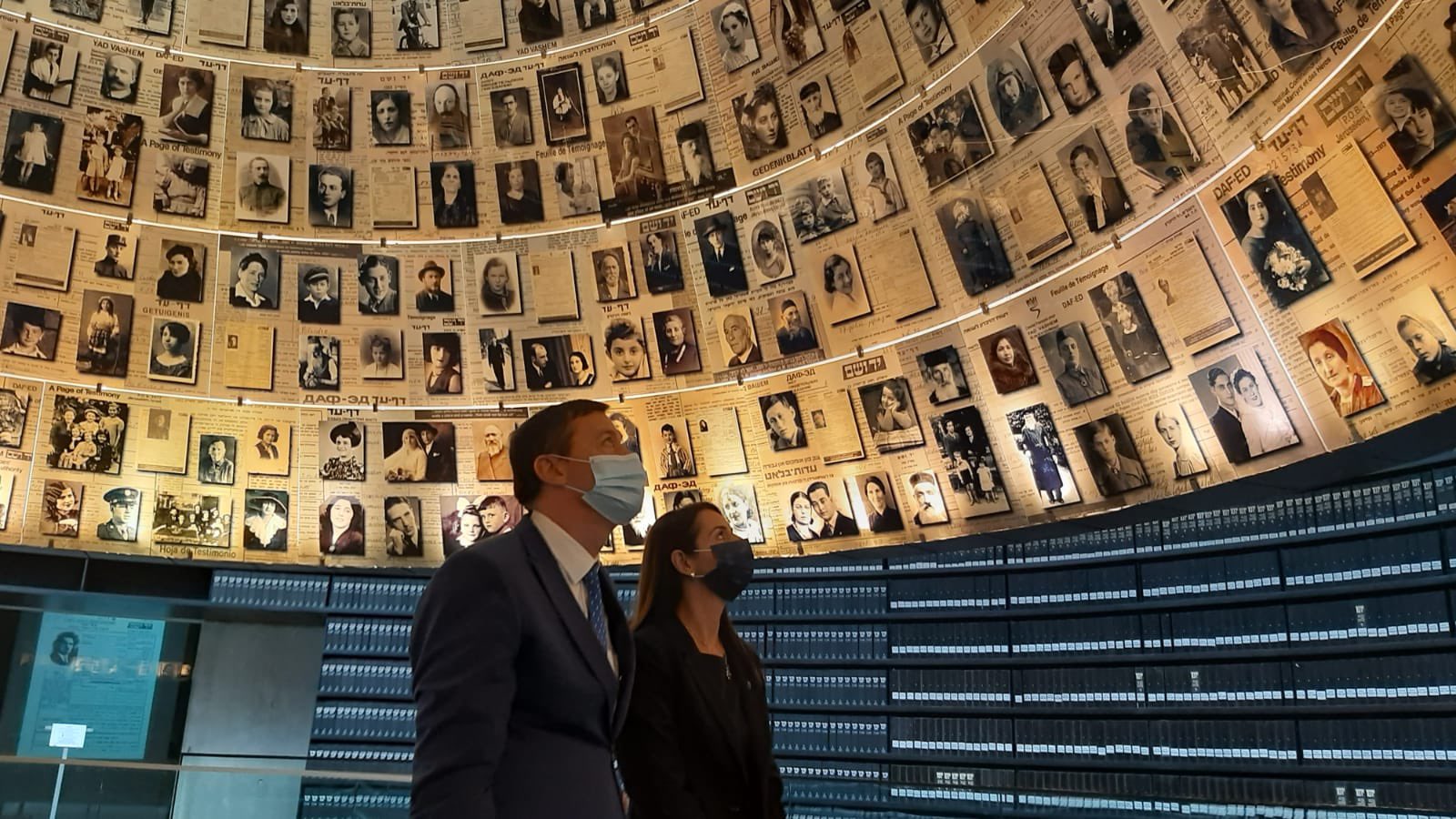 The interview was conducted in English, one of the five languages Demiri speaks. Her father, Votim Demiri, who is considered the head of the Jewish Community in Kosovo, served in Paris for the Chamber of Commerce, where she attended school before continuing her studies in Turkey.

At the historic, first-of-its-kind virtual online signing ceremony in February, Ashkenazi remarked that “the establishment of relations between Israel and Kosovo is an important and exciting historical step that reflects the many changes the region has experienced in recent months. Today, Kosovo officially joins the circle of countries that strive for peace and stability, and recognize Israel and Jerusalem as its capital.”

Kosovo declared its independence from Serbia in 2008. Its long history of conquests goes back centuries before the Ottoman Empire. Connections with Israel can be traced to the 15th century when six families, including the Levi, Cohen and Bahar families, fled the inquisition in Spain and Portugal, and settled in Novo Brdo.

Until World War II, the Jewish community supported a yeshivah, two synagogues and a long-established Jewish cemetery. When the Italians arrived in 1943, the Albanians helped Jews by falsifying documents and providing them with an escape route.

However, when the Germans invaded, 258 of the remaining Jews were sent to Bergen-Belsen, where 92 were murdered by the Nazis. Survivors came back to Kosovo after liberation and the end of the war. In 1948, a sizable group moved to the newly established Jewish State of Israel.

Today, a Bergen-Belsen memorial plaque has been placed in the location where Communists destroyed the last synagogue in 1963.

The following is a lightly edited question-and-answer segment of the interview with Demiri.

Q: How did the Muslim Kosovar population react to its embassy being placed in Jerusalem?

It is true that the vast majority of the citizens of the Republic of Kosovo are Muslim, and they have welcomed and appreciated the establishment of diplomatic relations with the State of Israel in spite of isolated voices of discontent.

Albanians, for the most part, belong to three religions (Muslim, Catholic and Orthodox). This has historically been a basis of a unique religious tolerance and harmony, perhaps unparalleled for most of the world. This makes us very proud as a state, which also in its constitution is defined as a secular state.​ 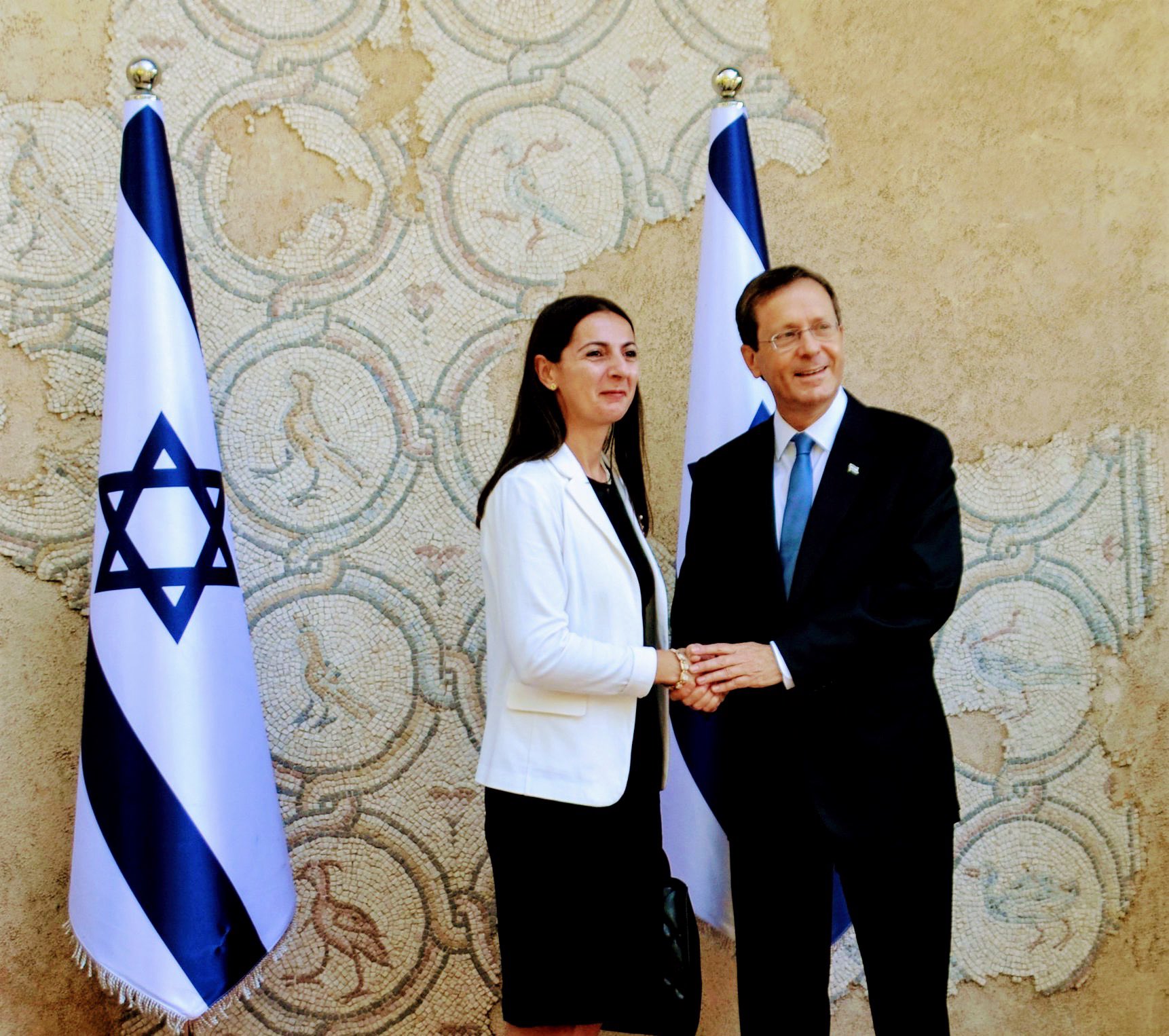 Q: How can the embassy contribute to furthering relationships between Israel and other Muslim-majority countries?

A: In line with a unique friendship and relationship between Albanians and Jews, the embassy of the Republic of Kosovo in Jerusalem aims to deepen bilateral cooperation between the Republic of Kosovo and the State of Israel in all areas of interest for the mutual benefit of citizens in both countries. Specific focus should be on economic cooperation, as Kosovo is vitally interested to foster economic cooperation with Israel.

At the same time, since most of the citizens of Kosovo are Muslim, good bilateral relations between Kosovo and Israel will serve as an example to many other countries—be it majority-Muslim, majority-Christian or other faith.

We as a nation and as a people have gone through unspeakable suffering in our history, and now as a new state, we aim to build healthy friendships with other peoples and to establish bilateral relations with other countries based on democratic values and mutual respect.​

Q: What about the vision for the future beyond the partnerships we discussed?

A: Six months after the establishment of the diplomatic relations between the Republic of Kosovo and the State of Israel, the embassy was mainly focused on getting to know each other and building relationships and cooperation. It is worth mentioning that there are already projects under consideration in many different areas of mutual interest for our countries. As I said earlier, the economy is an area where both countries will identify common interests. It is crucial that the State of Israel put Kosovo in its map of foreign investment and cooperation. Kosovo has state-of-the-art legislation to attract and protect foreign investments. At the same time, Kosovo has a highly skilled young population, which makes up a labor market, being among the cheapest in Europe.

Economic cooperation between the two countries is one of the best platforms to create sustainable relationships between our countries without forgetting the importance of building cooperation in education, medicine, IT and tourism.

On one side, establishing an embassy from scratch, and on the other side, running to fill the gap of years of absence of diplomatic relations was very challenging personally to me.

The interest by Israelis to know more about Kosovo—seeking cooperation in all possible fields—is a promising indication of our future close cooperation on a very wide range of areas.

The genuine friendships between the two peoples, based on history, are the core element that will result in concrete results not only between institutions but also between people-to-people connections.