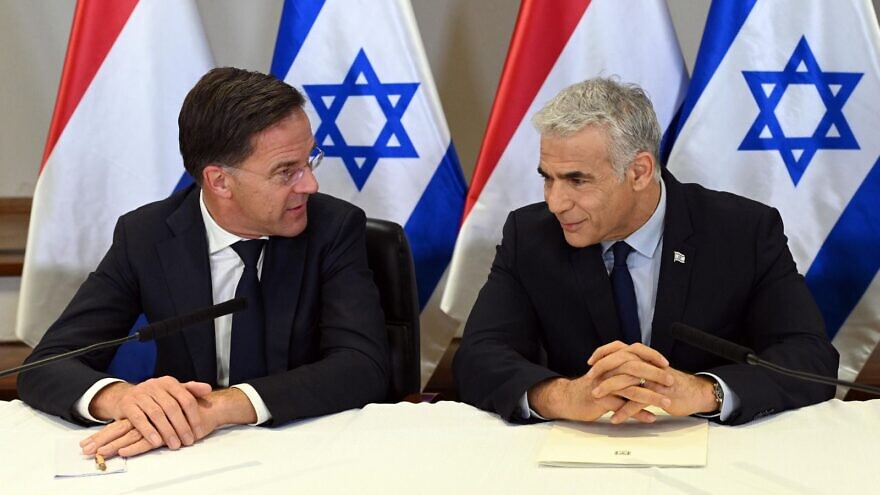 (October 24, 2022 / JNS) Israeli Prime Minister Yair Lapid on Monday met with his visiting counterpart from the Netherlands, Mark Rutte, during which they discussed the prospective U.S.-mediated maritime border agreement with Beirut and the likelihood of Jerusalem becoming an energy exporter.

“On Thursday, we are going to sign a historic agreement with Lebanon. And Israel will become in the near future a major supplier of gas to Europe,” Lapid told Rutte, according to the Israeli premier’s office.

“We share a vision, we share values; we both believe in liberal democracy, liberal values, and this is the basis for the relations between our two countries, and these values are being tested today and there are some who fight them,” said Lapid, adding: “If we look at the demonstrations in Iran, they are, I think, an inspiration to all of us. People who are willing to fight, especially women who are willing to fight for freedom and risk their lives for basic rights.”

Lapid called to set a date for the next meeting of the Dutch-Israeli Cooperation Forum, which he said had been neglected for too long.

“Israel has come back, after more than a decade, to the Association Council with the European Union, and with the help of the Netherlands, and so I think our Forum should be the natural follow-up for this in order to, again, strengthen our relationship,” said Lapid.

The Forum’s objective is to strengthen bilateral relations by increasing cooperation on innovation by bringing together representatives from business, academia, civil society and government, and to explore new fields of possible cooperation.