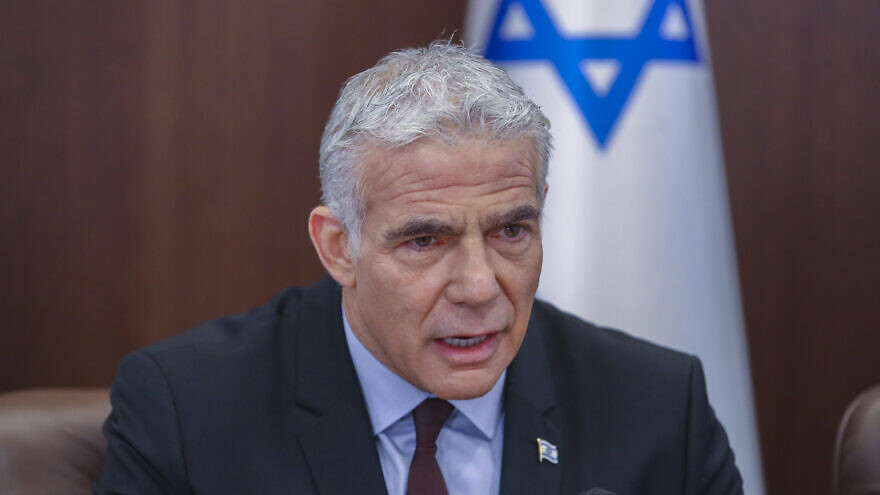 (December 5, 2022 / JNS) Even before taking power, Benjamin Netanyahu has found himself on the defensive over his prospective coalition’s “fringe elements.” During an NBC interview on Sunday, Netanyahu felt obliged to declare, “I’m going to safeguard Israeli democracy.”

However, legal analysts told JNS the danger to democracy may come from another corner, namely the actions of outgoing Prime Minister Yair Lapid, who called on local authorities to flout the incoming government’s directives.

In a Dec. 1 open letter, Lapid urged Israeli municipalities not to cooperate with an educational department to be headed by far-right Knesset member Avi Maoz. Maoz is the sole representative in Israel’s parliament of the Noam Party, which focuses on social issues, on which it takes a traditional (its detractors would say archaic) religious stance. It’s criticized mainly for opposing LGBTQ rights.

The opposition coalition set to establish the next government has “abandoned the education of our children and handed them over to the most extreme and darkest elements in Israeli society,” Lapid wrote to the municipalities, labeling Noam “racist, homophobic and dangerous.

“I urge you not to cooperate with the unit for external programs and partnerships in the Ministry of Education as long as it is under the control of Maoz. The heavy responsibility for the educational content that our children will learn in the schools now passes to you,” he wrote.

Lapid found a ready ear. More than 50 mayors and local authorities signed an open letter last week, this one addressed to Netanyahu, in which they said they wouldn’t take part in curricula “that contradict the humanistic values, which appear in the State Education Law.”

The mayor of Ramat Gan said that “for every hour of study of liberalism, inclusion and equality that the government cuts, Ramat Gan will allocate two hours on those subjects.”

Maoz denounced the attacks in a press briefing on Monday, labeling it “an attempt to prevent the prime minister-designate from forming the sole legitimate elected government after the elections.”

Netanyahu on Friday criticized Lapid for “attempting to incite rebellion among army officers and mayors against the elected government under our leadership.”

Simcha Rothman, a Knesset member from the Religious Zionism Party, which Noam ran with in the Nov. 1 election, said that Lapid had broken the law. “It is illegal to call on municipalities not to cooperate with a governmental unit because you disapprove of the elected government and the minister that is in charge,” he tweeted Friday. “It is a criminal offense and a PM who just lost the election doing so is worse than an attack on the [U.S.] Capitol.”

Avi Bell, a professor at the University of San Diego School of Law and at Bar-Ilan University’s Faculty of Law, told JNS that it’s not clear that Lapid broke the law, but even if he did the issue shouldn’t be approached as a legal matter. “The courts have already been politicized enough. These sorts of things should be handled at the ballot box and not in the courtroom.”

Bell’s concern is that Lapid’s remarks encourage lawlessness. “It’s his rhetorical approach in general. He describes the other side of the political aisle as the forces of darkness, and now that he’s lost [the election], Israel isn’t going to be democratic anymore; democracy depends on him winning. These kinds of things encourage people to take the law into their own hands. And that’s incredibly dangerous for a political leader to do.

“What will deter him potentially from doing this is not his opponents but his supporters. If they draw the line and tell him, ‘Enough,’ ” Bell said.

Itzhak Bam, an Israeli attorney specializing in areas of criminal and administrative law, human rights and freedom of expression, agreed that the concern shouldn’t be whether Lapid crossed a criminal red line (Bam said he doesn’t believe he did), but rather whether his actions comport with the spirit of democracy.

“Essentially, he’s saying boycott the elected government. That’s just not done in a democracy. You can voice disapproval. You can try to change the mind of the minister who’s in charge on the issue. You can say that it’s bad policy. But to boycott? If you’re a local government official, you should cooperate with the central government,” he said.

The problem is that Israeli civil society is “extremely polarized” and Lapid is “polarizing civil society even more,” Bam added. “Sometimes in a democracy, good people with good intentions do a lot of harm.”

Given Lapid’s behavior, Bam worried that he may not truly understand democracy, noting that while Lapid had been a popular journalist and talk show host before entering politics, his educational background is quite limited, given that he never even obtained a high school degree.

“Now that he’s in opposition maybe he’ll have time to study. Maybe he should read some political philosophy. Begin with Plato, then read some Cicero, then Hobbes, Locke, John Stuart Mill, ‘The Federalist Papers.’ Rousseau he shouldn’t read. He’s had enough of Rousseau on his own,” Bam said.