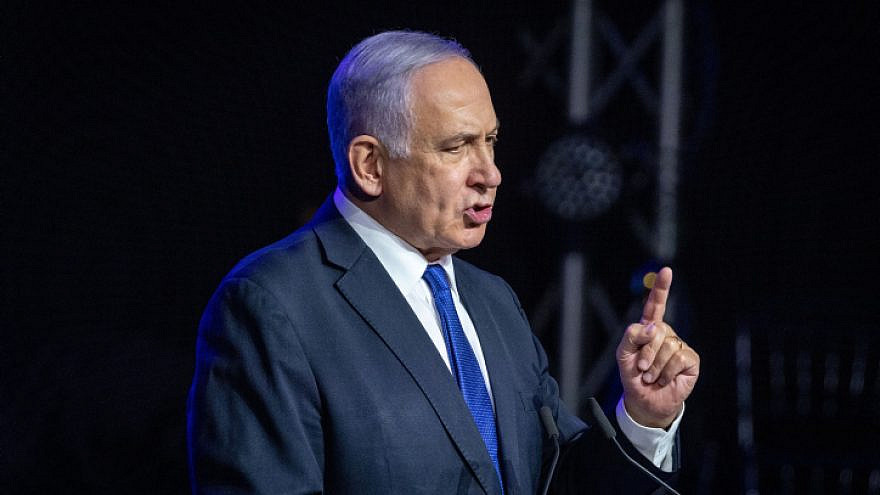 “The left is using Bennett as a tool to crown itself once again, and Bennett is using [the left] as a tool to get himself into the Prime Minister’s Office,” Netanyahu told Channel 20. As a result, he said, the country was entering dangerous territory.

The so-called “change” coalition posed a greater risk to the country than the Oslo process and the 2005 Gaza disengagement, said Netanyahu.

“I warned—you remember this—I warned at Oslo, and I said there would rise terror strongholds in the heart of the country. And we saw the exploding buses. When I resigned from the government during the [Gaza] disengagement, I warned that the entire country, or at least a large part of it, would turn into a firing range [for Hamas rockets]. And I was right. I was right about this, too,” he said.

“And now I warn: The danger posed by this [forming] government is much greater … because there is a threat here, first of all, to our national security,” he added.

The prospective government would be weak on Iran and would not stand up to the United States, said Netanyahu, and would not take action, other than lip service, to halt the Iranian nuclear program.

“Pyrotechnics in Syria? That [doesn’t matter]. There, in the place where it matters [Iran], and in Washington, in these two places—nothing. The minute this [coalition] deal is signed, it’s over,” he said.

The Israeli prime minister was responding to remarks made by Bennett earlier in the day, during a press conference following the first meeting of the heads of all the factions in the country’s prospective government.

The Yamina leader had criticized what he called the “violent machine” that had been operating against lawmakers involved in the efforts to form a government.

“This is a sponsored, managed operation, aimed at breaking them down so that they will defect and vote against the new government,” he said.

“I call on Mr. Netanyahu: Let go. Let the country move forward. People are allowed to vote for a government even if you do not lead it,” he added.

Bennett accused Netanyahu of spreading lies about the new government, such as that it had caved in to the demands of the Islamist Ra’am Party with regard to illegal Arab construction.

According to columnist Caroline Glick, Channel 13 News reported on Friday that Ra’am, in its written statements and in television interviews on Arabic-language channels by its MKs, is claiming that Lapid and Bennett had agreed that their “unity” government will end enforcement of building and zoning laws in Arab-Israeli villages and cities.

Bennett also called on Knesset Speaker Yariv Levin of the Likud not to delay the vote on the new government until next week, saying that though it “might be in Netanyahu’s interest” that he do so, it was not in the interest of the country.

Opposition figures and some media pundits have accused Netanyahu’s supporters of engaging in inciteful rhetoric. Such claims received a boost when Nadav Argaman, head of the Shin Bet Israel Security Agency issued a warning on Sunday, largely seen as directed at the right, against rising incitement, especially on social media.

Netanyahu, speaking at the Likud faction meeting in the Knesset on Sunday, condemned all incitement, but added, “No one will silence us, because when a massive constituency feels that it has been conned, it has a right and duty to protest using any democratic means at its disposal.”