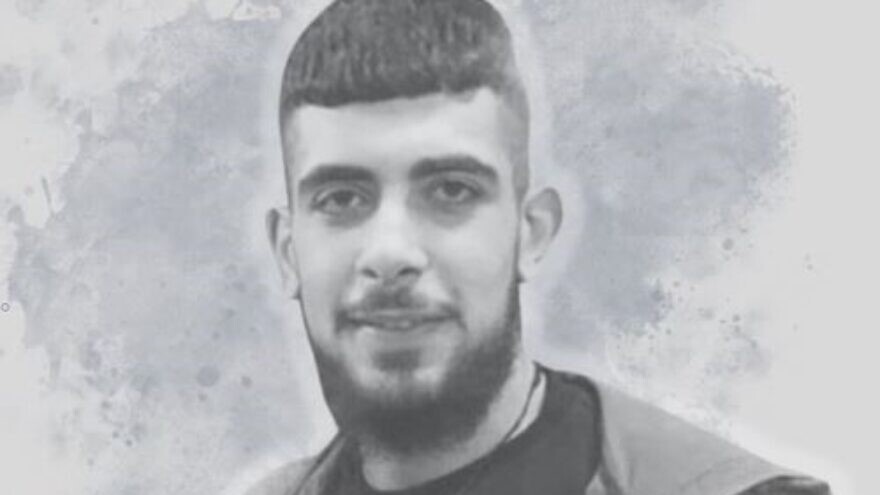 (July 27, 2022 / JNS) It was the second narrow escape for terror cell leader Ibrahim Nabulsi, whom Palestinian admirers have dubbed “The Lion of Nablus.” During an IDF operation in Nablus on July 23, he managed to flee as Israeli forces closed in on his terrorist hideout near the city’s kasbah. Nabulsi was later seen at the funeral for two terrorists who were killed in the operation.

Palestinians claim that Nabulsi was the target of the raid, but the Israel Defense Forces, which carried out the operation together with the Israel Security Agency (Shabak) and the Israel National Counter-Terrorism Unit (Yamam), denies it, according to Channel 12. The report noted that Nabulsi managed to escape an IDF daytime operation four months ago and has since participated in several attacks on Israelis.

At least five hundred soldiers of the zionist forces are reported to be in Nablus, in a chase of resistance leader, Ibrahim Nabulsi. #NablusUnderAttack #NablusResists pic.twitter.com/UQtrXNjtkG

“He managed to escape twice from the IDF, but he definitely will be killed,” Yoni Ben-Menachem, a senior researcher at the Jerusalem Center for Public Affairs (JCPA), told JNS, adding that the reason is that Nabulsi is not the type to surrender. “Four of his cell have already been killed. There are a few more, including some young juveniles, 13- to 14-year-olds,” he said, explaining that the youth are being mentored to become the next generation of terrorists. 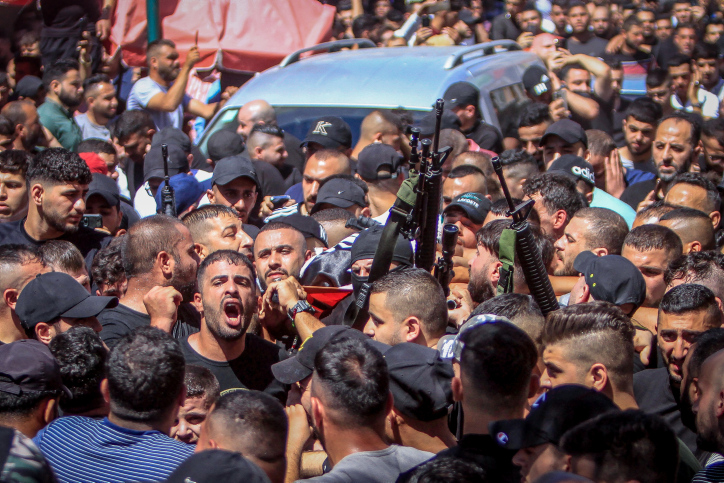 Palestinian terrorists attend the funerals of Mohammad Bashar Azizi and Abderrahman Jamal Soboh, who were killed in clashes with Israeli security forces, in Nablus, on July 24, 2022. Photo by Nasser.

Ben-Menachem dismissed Palestinian attempts to lionize Nabulsi as propaganda to drive recruitment. “Nobody takes it seriously. Only the young generation, the 13- and 14-year-old kids who don’t understand anything, believe these people are heroes,” he said. “Nabulsi doesn’t stand a chance against the special units of the IDF, who are very well trained and considered the best in the world,” he continued.

The terrorists “should be very worried, because Israel’s Shabak has very accurate information about their whereabouts. It knows how to reach them, even in the heart of Nablus,” he added. 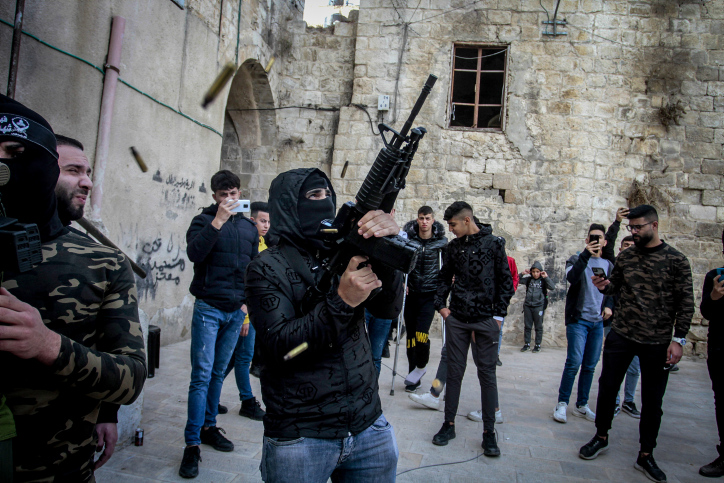 The funeral of Jamil al-Kayyal, who was killed in clashes with Israeli forces, in the West Bank city of Nablus, Dec.13, 2021. Photo by Nasser Ishtayeh/Flash90.

Among Arabs living in northern Samaria there has always been a “tradition of armed struggle,” said Ben-Menachem, especially in Jenin, the “capital of terrorism.” The real issue, he said, is that for the past two years Israel has allowed the problem there to fester, giving the terrorists time to rebuild their infrastructure. They are now 500 to 600 strong, and the various Palestinian terrorist groups work together, he said. For example, he continued, “When the IDF surrounded the house in the old city of Nablus on Saturday, the Palestinian terrorists from [Palestinian] Islamic Jihad in Jenin started going to Nablus to help them.” Nabulsi is a member of the Al-Aqsa Martyrs’ Brigades.

After the April 7 attack on a Dizengoff Street pub in Tel Aviv by a 28-year-old terrorist from Jenin, several senior IDF officers, along with a former head of Shabak, called for an operation in northern Samaria to clear the area of terrorists. According to Ben-Menachem, who has endorsed this approach, clearing the terrorist infrastructure in the area will require a month or two. 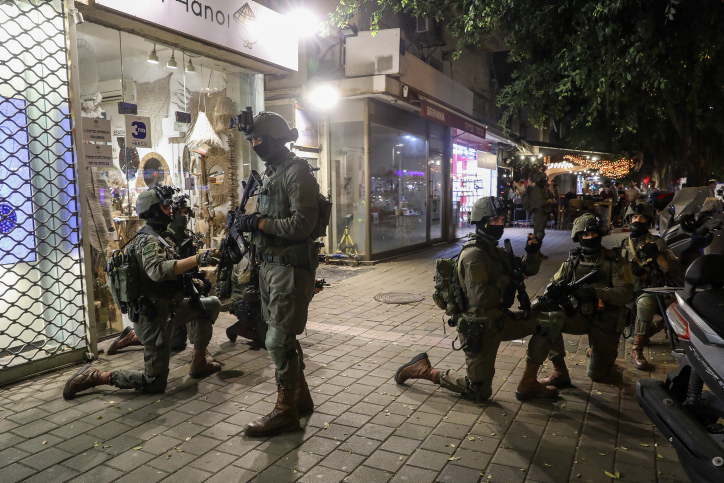 Israeli soldiers search for an armed terrorist on Dizengoff Street in Tel Aviv on April 7, 2022. The terrorist was located the following morning hiding near a mosque in Jaffa, and was killed in a shootout with Israel Security Agency officers. Photo by Noam Revkin Fenton/Flash90.

However, U.S. President Joe Biden’s visit to Israel earlier this month put off the possibility of an operation.

“[Former Prime Minister Naftali] Bennett didn’t want to do something big because of American pressure,” said Ben-Menachem. “The bottom line is what is needed is a large-scale operation to reoccupy Jenin and all the villages around it—there are five to six villages full of terrorist infrastructure—to reoccupy them for a month or two and clean everything up. This will lead to quiet—if the IDF will do it. But this is a political decision,” he added. 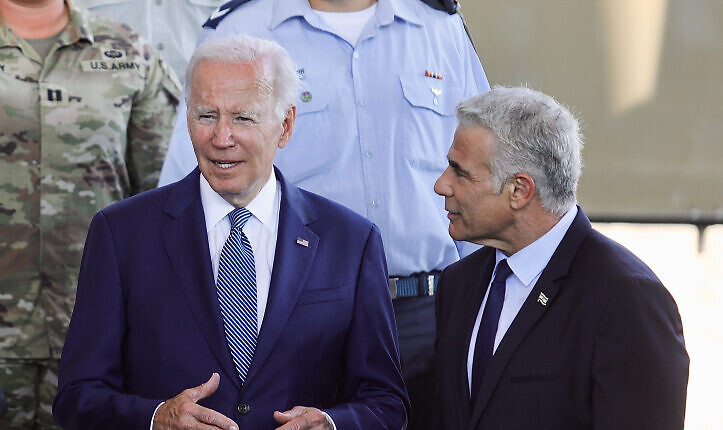 Amir Avivi, CEO and founder of the Israel Defense and Security Forum (IDSF), an Israeli NGO comprising thousands of former security officers, told JNS that the IDF “to some extent neglected operations in northern Samaria and relied too heavily on the Palestinian Authority” over the past few years.

Referring to recent Palestinian attacks on IDF forces operating in Arab towns and cities in Judea and Samaria, he said, “If you neglect operations in an area and there is an increasing amount of weaponry, when you finally decide to deal with it, at the beginning it will be hard. You have to go in again and again until you reach a level of freedom of operation, without too much resistance.”

It took Israel almost six years to stabilize Judea and Samaria from when it entered the region to contend with terrorists in 2002’s “Operation Defensive Shield,” he noted.

“There is a price for not doing the work on an everyday basis and trying to contract with this corrupt terrorist organization called the Palestinian Authority, and I think we are paying the price, and we have to fix this,” he said.

Avivi drew a direct line between the deterioration of the security situation in the area and the 2006 evacuation of four Israeli towns, Ganim, Kadim, Sa-Nur and Homesh.

“Homesh, for example, is a crucial hill for controlling the surrounding area,” he said. “When you remove this constant Jewish presence, it affects the ability of the IDF to maneuver … This is exactly the difference between Gaza and Samaria. In Gaza, to arrest somebody you need a full-scale war, and, therefore, there have been zero arrests in the last 15 to 16 years since Hamas took over,” he said.

With regard to Nabulsi, unlike Ben-Menachem Avivi said it was up to the terrorist whether he would be killed or captured.

“If he shoots at our forces, they will shoot back. This is how it works. It’s clear that eventually the IDF will catch up with him,” he said.

According to Avivi, while Palestinian efforts to turn Nabulsi into a popular hero might impress Palestinian youths, it wouldn’t affect IDF thinking on the matter.

“I’ve never in my 30 years of service dealing with endless numbers of arrests ever thought about connecting popularity to the way we conduct our military missions. It simply doesn’t work like that,” he said.