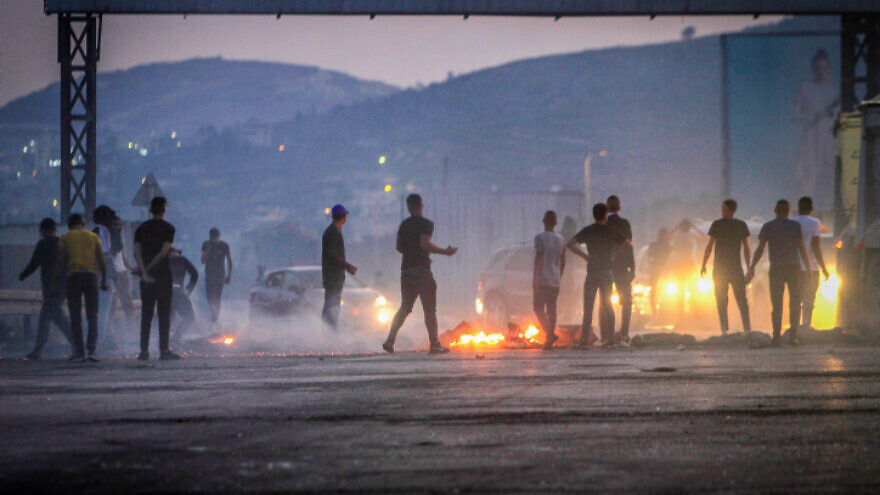 (October 18, 2022 / JNS) The Lions’ Den terror group, recently formed in Nablus, comprises dozens of gunmen and is not very well organized. Nevertheless, the group’s activities serve the purposes of established terror factions like Hamas and Palestinian Islamic Jihad, which are amplifying its influence, according to a senior Israeli terrorism expert.

The group has also been punching above its weight in terms of influence on the Palestinian street due to its shrewd use of social media, according to Dr Michael Barak, a senior researcher specializing in terrorism and radical Islamic networks at the Institute for Counter-Terrorism at Reichman University, Herzliya.

The group is heavily reliant on a variety of social media platforms, among them Telegram, said Barak.

“Social media plays an important role in boosting [the terrorists’] morale. They boast that they are successful in ‘blocking’ the IDF, and that they are shooting Israeli soldiers. They are fueled by social media,” said Barak. “They make a lot of mention of ‘sacrifice’ – that their generation sacrifices so that the next Palestinian generation will reap the rewards.”

While Barak doubts that the organization will physically spread in any significant manner, he said that it has begun shifting from “defensive” operations—targeting Israel Defense Forces units conducting security operations in Samaria, commonly known as the northern West Bank—to targeting Israeli civilian and military traffic on area roads.

According to Barak, Lions’ Den is a grassroots organization that cuts across ideological and political lines. “It does not have a philosophy or an umbrella organization that guides these young people. It’s a spontaneous, unplanned protest movement,” he said.

A friend of the late gunmen, Muhammad al-Azizi, fed up with what he perceived as the impotence of the Palestinian Authority and other Palestinian leaders to solve political and economic problems, set up the movement in July of that year. On July 24, al-Azizi was killed during a firefight with the Israeli military.

“This invigorated young people in Nablus even more. They decided to expand their activities in Nablus,” said Barak.

According to Barak, the emergence of this new terrorist entity is part of a larger trend of inter-generational Palestinian conflict in the West Bank. In Samaria, he said, there is a vacuum of authority. In addition, the young generation places a high stress on notions of national honor. “As a result, their battle cry is ‘defending our honor against the Zionists. We will do it if none of the older adults can do it,’” he said.

“Because they are dissatisfied with politics, they claim they have no ties to anyone. They talk about defending the holy sites of Islam and their morale goes up. They deal in false charges about Israeli plots against the Al-Aqsa Mosque,” he added.

While the group itself is limited in terms of capabilities, it could in theory produce a snowball effect, spreading its message of violence, Barak warned.

Hamas, for its part, is riding on the bandwagon, using Lions’ Den as proof that its “resistance” ethos is taking root, and implying that the group is essentially acting on Hamas orders, he said.

However, he added, Hamas’s participation is unlikely to go further, as the Gaza terror group is currently enjoying economic “bonuses” promised to it by Egypt and the international community for maintaining the truce. Though if the trend of violence continues, some of Hamas’s Gaza leadership could be tempted to join in, he admitted.

“One of the reasons we are seeing a weak Palestinian leadership in the West Bank is that the Palestinian Authority is constantly in a power struggle. Members of Fatah are attempting to strengthen the [various potential] candidates to succeed P.A. leader Mahmoud Abbas, and some of these candidates, like Jibril Rajoub [secretary-general of Fatah’s Central Committee] have their own militias,” said Barak.

Facing off against Rajoub are front-line candidates for succession like Hussein al-Sheikh [appointed in May by Abbas as secretary-general of the PLO Executive Committee]. Al-Sheikh also has a militia. Abbas has marked him out as his chosen successor, creating tensions in Fatah.

“They are all preparing for the day after Abbas leaves the political scene,” said Barak, adding that in the meantime, the P.A.’s authority on the ground is suffering.

“The public and youth see this; there is no legitimacy for the P.A. because of these power struggles. The P.A. is viewed as uncaring and corrupt. The youth are sick of it. They’re also furious that the P.A. allows the IDF to enter Palestinian cities with such ease,” he said. “The youth argue that they must put an end to this, and that’s how Lion’s Den was formed.”

Further encouraged by internal divisions in Israel, the latest terror group argues that Israel is not as powerful as it would like to be.

Barak noted that while it is the Palestinian Islamic Jihad that has been most prominent in rhetorical support for Lion’s Den, “Worryingly, there is growing activity among the Fatah Al-Aqsa Brigades, indicating some support for Lion’s Den,” he said, referring to militias affiliated with Fatah also known as the Tanzim.

If the current situation persists, Barak said, one scenario is that the P.A. implodes and Hamas rears its head in the West Bank.

“We can clearly see how support for Lion’s Den is helping Hamas’s quest to grow in power in Judea and Samaria,” said Barak.