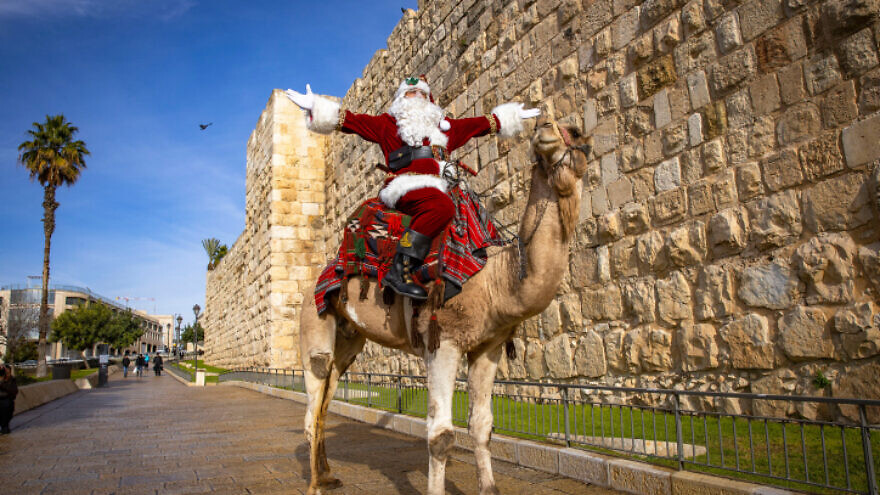 The number of Christians in Israel grew by 1.4 percent in 2020 reaching 182,000 people with 84 percent saying they are satisfied with life in Israel, according to the Central Bureau of Statistics (CBS).

The recent storms that swept through the region, such as the Syrian war, Iraq upheaval and the spread of Islamist terror have left the Christian community in Israel unscathed.

According to Israel’s Ministry of Foreign Affairs, the Christian communities in Israel can be broken into four main categories: Chalcedonian-Orthodox (Eastern Orthodox such as the Greek and Russian denominations); Non-Chalcedonian Orthodox (Armenian, Coptic, Ethiopian and Syrian); Roman Catholic; and Protestant. They are predominantly Arabic-speaking.

As their holiday season approaches, Christians in Israel are in a festive mood, according to Capt. (res.) Shadi Khalloul, the head of the Israeli Christian Aramaic NGO and spokesman of the Christian Israel Defense Forces Officers Forum.

He notes that the Jewish-run municipality of Haifa has allowed a large Christmas tree and decorations on the main roads.

“This proves the beautiful co-existence, safety, prosperity and freedom people enjoy in the Jewish democratic State of Israel,” said Khalloul, who made news back in 2015 when he successfully led a campaign to have his child’s state registry changed from Arab to Christian Aramean in the interior ministry.

“Under the Palestinian Authority and other Arab countries, Christians fear to show their holiday symbols in public and are not protected by the state,” said Khalloul, who is also a former Knesset candidate.

“For example, many Christian families living in Iraq and Syria are in poverty, and cannot afford proper celebrations,” continued Khalloul.

The Maronite Christian community has shrunk and become a weak minority even in Lebanon, according to Khalloul. And as the economic crisis in the country has grown, especially in the course of the last year following a massive explosion at the Beirut Port in August 2020 and the onset of the coronavirus, many have suffered.

Most Maronites live in Lebanon; their numbers decreased from around 29 percent of the population in 1932 to around 22 percent in 2008.

According to a journal article by Israeli Syria and Lebanon expert Eyal Zisser, Maronite ties to the Jewish community in Israel began as early as the 1930s and continued through independence in 1948. The alliance against the Muslim Arab world was built on the belief that Israel was to serve as the national home for Jews and Lebanon for Maronites.

“While Middle Eastern Christians are [for the most part] oppressed, in Israel, they are thriving,” said Khalloul.

Israel recently announced that it would allow 500 Christian community members from the Gaza Strip to enter Israel and the West Bank to celebrate the holidays.

Gaza’s community maintains around 1,000 Christians, and in the West Bank, a dwindling number remains as many have emigrated. According to the CIA Facebook, Christians and other small non-Muslim and non-Jewish religions make up 8 percent of the West Bank population.

According to a 2018 NBC news report, the Christian population of Bethlehem had dropped from 80 percent in 1950 to around 12 percent.

However, Christian leaders sought to blame Israel for the decline in Christians in the disputed territories.

In an article in last weekend’s Sunday Times, written jointly by the Archbishop of Canterbury, Justin Welby, and the Archbishop of Jerusalem, Hosam Naoum, warned about a crisis of Christian survival “in the Holy Land.” The church leaders blamed Christian’s shrinking numbers in the disputed territories to the “growth of settler communities” and “travel restrictions brought about by the West Bank separation wall.”

Alastair Kirk, of Christians United For Israel U.K., disputed this portrayal and accused the church leaders of demonizing Israel.

“While there are serious issues to address in the context of Christians in the Holy Land, Christians living in Israel proper enjoy the same freedoms as other Israelis,” Kirk said. “There are real concerns for those Christians living in the West Bank who, like so many, are caught in a conflict, but rather than examine the challenges faced by Christians in the West Bank in a manner that may bring the British public closer to understanding them, the archbishops ignore key facts, effectively demonizing Israel in the process.”

Kirk continued: “Across the globe in 2021, Christians have been killed simply because of their faith. Millions of Christians have been uprooted. Many have been imprisoned. Churches have been attacked or forced underground. It is somewhat disturbing that the archbishops have thought it timely to publicly use the occasion of Christmas, in which Bethlehem plays such an important role, to raise contentious issues that some will use to further vilify Israel.”

The Palestinian Authority is very weak and cannot provide adequate security to Christians living in the West Bank, he said.

“The difference between Christians in Israel and the Arab world is obvious. We are citizens and have equal political rights, while the situation in Arab countries is not good,” he said.

Shlayan, who has headed a party that failed to pass the electoral threshold in past elections, points out that “at least we have the right to run.”

His political movement seeks to promote co-existence and local issues instead of fomenting conflict. He criticized the Arab parties in the Knesset, which focus on identifying with Palestinians in the West Bank and Gaza.

Said Shlayan: “Israeli Arabs politicians should represent us and not serve as Palestinian representatives.”