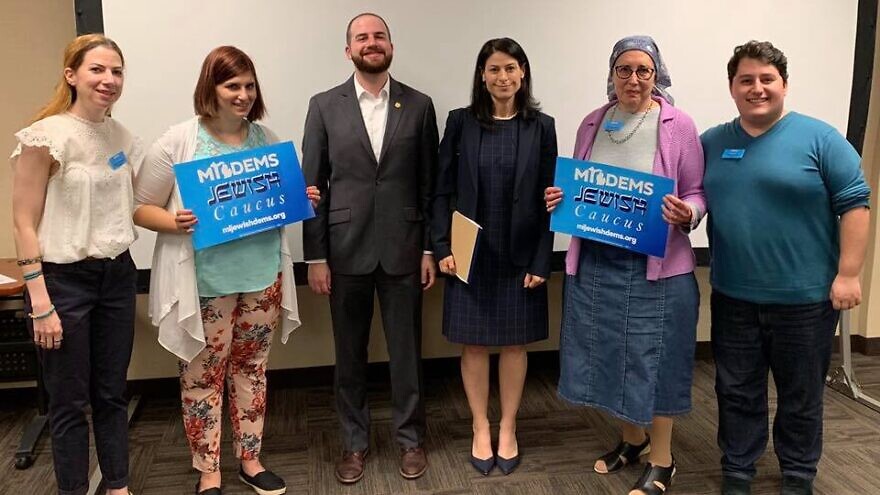 (January 24, 2020 / JNS) The Michigan Democratic Jewish Caucus (MDJC) became a charter of the state’s Democratic Party this month ahead of a busy election year, where Michigan is expected to be a key state for Democrats and Republicans in this year’s presidential elections. (Trump won the state by a narrow margin of 0.23 percent, with 47.50 percent of the votes over the 47.27 percent of Democratic nominee, former U.S. Secretary of State Hillary Clinton.)

The move “formalizes” the caucus’ “relationship as an organ of the Michigan Democratic Party and provides for Jewish representation on the governing bodies of the state party, in addition to access to the state party’s voter data, which will help us build our field organizing program,” MDJC founder and chair Noah Arbit told JNS in an email interview.

Arbit founded MDJC last year after noticing that there wasn’t a program for Jews at the 2017 Michigan Democratic Party convention.

He said MDJC’s mission is seven-fold: “Elevate Jewish voices within the Michigan Democratic Party”; “provide a forum for Jewish Michiganders to discuss political issues with elected officials and candidates”; “combat anti-Semitism and educate the public on its manifestations”; “increase Jewish representation in Michigan politics and government”; “recruit and train Jewish Democrats to organize and run for office”; “elect Democrats who share our values to local, state and federal office”; and ”advocate for progressive policies that make life better for all Michiganders.”

He remarked that “too many—Republicans, Trump, some on the far-left fringe—were demagoguing issues of anti-Semitism, Israel and the Jewish community in a way that continues to be deeply harmful to American Jews. So in terms of a response, the very founding of this organization is in part to help arrest some of the troubling rhetorical trends we see on the fringes.”

In The Michigan Advance, Arbit wrote: “First came the rampant anti-Semitism within the Women’s March, ostracizing Jewish activists from a progressive movement that viewed us as somehow part of the problem. Then came a series of ignorant remarks by U.S. Reps. Ilhan Omar (D-Minn.) and Rashida Tlaib (D-Detroit) — from Omar’s “all about the Benjamins” tweet, insinuating that Jewish money held sway over support for Israel in Congress to Tlaib’s ahistorical “calming feeling” remarks about the Holocaust — which many in the Jewish community found offensive or anti-Semitic.”

Nonetheless, regarding Tlaib, The Detroit Free Press reported that Arbit “doesn’t believe her comments have been as troublesome as some others” and “worries that animosity toward her in the suburbs could lead some Jews to reject Democrats.”

Arbit said, “Of course, we will never hesitate in calling out anti-Semitic rhetoric when someone engages in it, whether left or right.”

“But there is a reason why 80 percent of American Jews continue to vote for Democrats,” he continued. “And we are here to hold the line and aggressively making the case that the mainstream Democratic Party is the only political party that truly represents American Jews, particularly in 2020.”

Arbit said in Michigan, “we are lucky to boast some of the Democratic Party’s finest champions of the Jewish community, including our own representatives, Elissa Slotkin and Andy Levin, as well as senators, [Gary] Peters and [Debbie] Stabenow. The Michigan Democratic Jewish Caucus works with each of our members to deepen understanding of the needs of Jewish Michiganders.”

He added that “Michigan’s Jewish community could not ask for a stronger advocate” than Rep. Elissa Slotkin, who was the first Jewish congresswoman to be elected in Michigan.