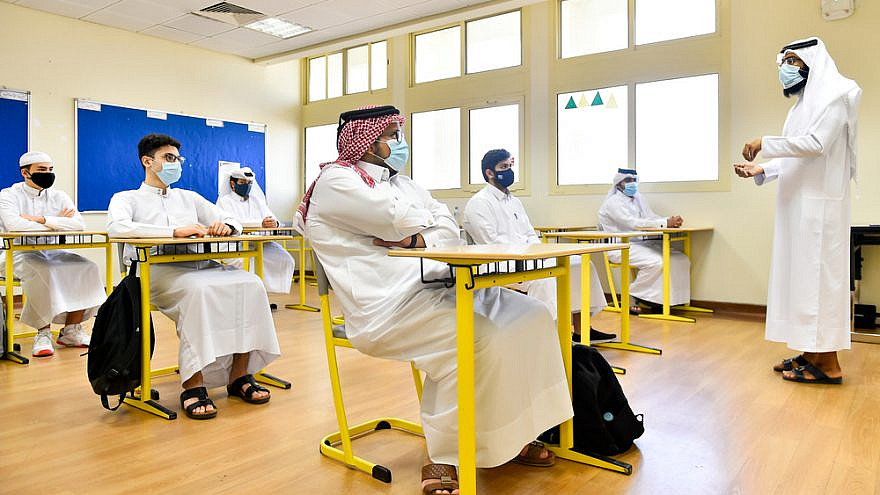 (May 28, 2021 / JNS) Qatar prides itself on its high level of education and yet its own textbooks clearly do not meet accepted international standards, according to a new report by IMPACT-se, a research institute that analyzes schoolbooks and curricula within the prism of UNESCO-defined standards on peace and tolerance. Its updated report evaluates the current Qatari curriculum in conjunction with the London-based think tank the Henry Jackson Society.

Some of the key findings show that hatred towards Jews and clear anti-Semitism remain central themes of the curriculum. Jews are characterized as having global control. The persecution of Jews is justified by blaming the rise of the Nazi Party as a result of Jewish greed after World War I. Jews today are presented as disloyal, inherently treacherous and hostile enemies who seek “to bring the Muslims’ downfall and the end of Islam.”

In addition, the curriculum openly rejects the normalization and peace-making between Israel and Arab nations. In the fall of 2020, Israel codified ties with the United Arab Emirates and Bahrain as part of the Abraham Accords, followed by Sudan and Morocco.

Hamas, recognized as a terrorist organization by the United States and the European Union, is described in the textbooks as a legitimate “Islamic resistance” movement which seeks to “oppose the Zionist project.” Hamas’s firing of thousands of rockets into civilian populations is glorified—described as “brave” and “remarkable.” Suicide bombings and terrorist acts by Palestinians are portrayed as a legitimate response to ongoing Israeli oppression, calling terror acts as “armed operations” or “military operations.”

David Roberts of King’s College London, author of the report’s foreword and one of the most prominent Qatar experts today, told JNS “a state’s education curriculum feeds the waters in which state policy-makers swim.” He added that the Qatari curriculum “is a clear reflection of the direction of Qatari foreign policy, currently going through a period of change and testing the slowly venturing forth from a radical Islamist curriculum.”

He continued, “There is a litany of problematic elements in Qatar’s education curricula, as the IMPACT-se report exhaustively documents, which contrast the stipulated norms and international standards of UNESCO. Even if the critical links and rationales underpinning Qatar’s foreign policies are pragmatic and geostrategic in nature, generations of teaching such extreme and relatively extreme sentiments have surely had some impact, somewhere, on the decision-making chain.”

“Despite the hyper-controlled nature of Qatari policymaking and its relative insulation from local pressures, no leader, however autocratic, is entirely unmoored from public opinion,” he said. “And a local population raised on an educational curriculum of this nature is sure to be well-disposed to its state engaging and supporting Islamist-oriented causes broadly conceived.”

According to a statement published by IMPACT-se, the Qatari curriculum “appears to be in a phase of transformation. While somewhat less radical than previous versions, the process of moderation is in its infancy. Some particularly offensive material has been removed after decades of radical propaganda in Qatari schools; however, the curriculum still does not meet international standards of peace and tolerance.”

‘A slight movement away from radical jihadism’

The report focuses on Qatar’s school curriculum for grades one through 12. It provides an assessment by measuring Qatari textbooks against international standards based on UNESCO, U.N. declarations, and other recommendations and documents relating to education for peace and tolerance.

IMPACT-se said the curriculum “reflects the same overall tension facing Qatar’s leadership. That tension, as highlighted by Roberts, is between Qatar’s Islamist affinities and its desire to be seen as an open, neutral and progressive leader in the Arabian Gulf. Textbooks teach Qatari children to accept those different than themselves and advocate for peace, while at the same echoing anti-Semitic canards and reinforcing the Qatari regime’s support for Salafist terror organizations.”

“There is a slight movement away from radical jihadism but a great amount remains,” the statement said. “Nevertheless, Qatar’s curriculum is heavily influenced by Western educators—displaying the Qatari gift for embracing contradictions.”

Marcus Sheff, CEO of IMPACT-se, told JNS that while they envisage themselves as leaders in international education, the Qataris own curriculum “continually falls short of basic international standards of respect, peace and tolerance, and fails to propel Qatar towards its goals of modernization and globalization.”

Sheff said some changes to the textbooks have been made, “but the country stubbornly persists in its promotion of radical jihadi ideals.”

He also said that students are “encouraged to look at the world through a Muslim Brotherhood-created lens, and anti-Semitism remains a central component of Qatari education.”

The Qataris “might take this opportunity to promote peace in the region and stop describing Hamas firing of thousands of rockets into Israeli civilian populations as ‘brave’ and ‘remarkable’ in their textbooks,” suggested Sheff.

“It is clear what further changes need to be made,” he said. “If combined with peace and tolerance education, Qatar could become the leader in education it aspires to be.”