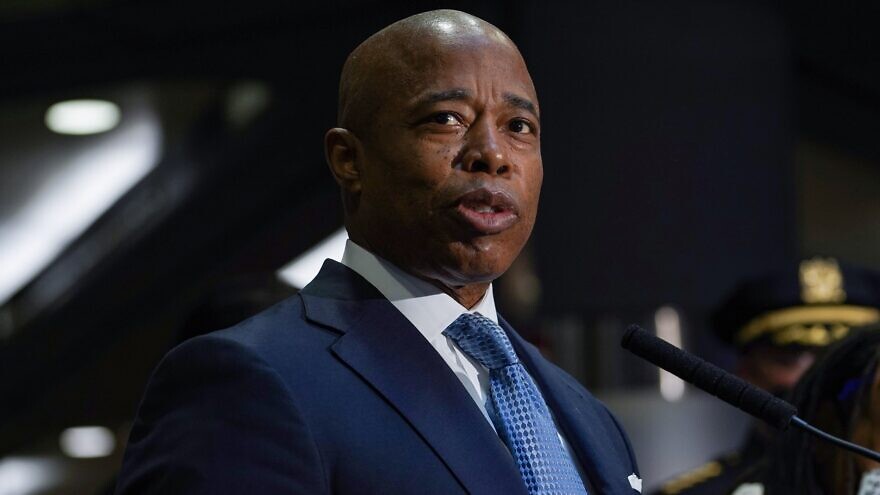 (November 29, 2022 / JNS) New York City Mayor Eric Adams is slated to depart for Greece on Wednesday to participate in the 2022 Mayors Summit Against Antisemitism, according to his office.

More than 50 mayors and municipal office holders from around the world are expected to attend the event, according to Greek media.

Earlier this month, the police thwarted a planned attack on Jewish targets in the city. Christopher Brown, 21, and Matthew Mahrer, 22 were arrested at Penn Station at around 11:30 p.m. EST on Nov. 18, after a bulletin was issued by law enforcement agencies seeking to question them.

At the time of their arrest Brown was reportedly armed with a large knife, and was also in possession of a swastika armband. Authorities later seized a handgun, a high-capacity magazine and 17 9mm rounds from a bag Maher had been filmed with earlier. Brown and Mahrer had threatened on social media to attack synagogues. Mahrer is reportedly Jewish and the grandson of a Holocaust survivor.

Adams’ trip to Athens also comes amid a spate of physical assaults on Jews in and around NYC.

Last week, Saadah Masoud pleaded guilty to one count of participating in a conspiracy to commit hate crime acts, according to the U.S. Attorney for the Southern District of New York. The charges came in connection with Masoud’s “repeated physical attacks of Jewish victims” in New York City between 2021 and 2022. He was arrested in June.

Canary Mission, which had compiled a file on Masoud based on his incitement to violence against supporters of Israel and spreading of antisemitic conspiracy theories, was able to identify Masoud as the man captured on video assaulting an individual wearing an Israeli flag in Manhattan street, leading to his arrest. He faces up to five years in prison.

The laws—one which requires individuals convicted of hate crimes to undergo mandatory training or counseling, and the second which establishes a statewide campaign for the acceptance, inclusion, tolerance and understanding of diversity—come after Hochul’s Jewish Republican opponent in the state’s recent gubernatorial election targeted her record on crime.

“Our hearts are broken after a weekend during which LGBTQ Americans were massacred and Jewish New Yorkers were targeted in horrific acts of hateful violence,” Hochul said in a statement. “New York belongs to the good, not those with hate in their hearts—we’re taking bold action to reclaim our city and state from the haters, bigots and white supremacists.”

In his campaign against Hochul, U.S. Rep. Lee Zeldin had aimed to take advantage of the perception that Hochul and New York Democrats were weak on crime and positioned himself as the law-and-order candidate. Despite his loss, Zeldin message especially resonated with the state’s many Orthodox neighborhoods, where increased crime usually also means a dramatic rise in antisemitic assaults on visible Jews and their property. Zeldin himself was assaulted during a campaign event in July, and was targeted with an anti-Semitic death threat in June.