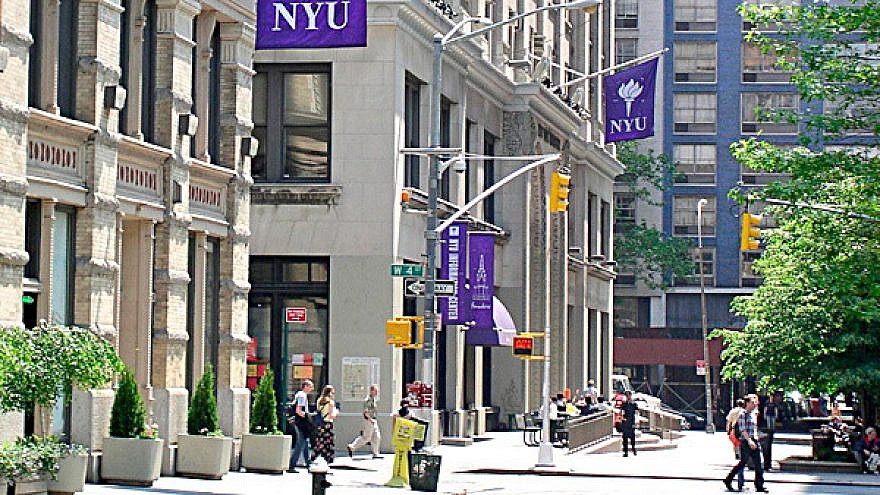 (December 6, 2018 / JNS) The student government at New York University passed a BDS resolution on Thursday evening calling on the university to separate its interests from firms such as Lockheed Martin, General Electric and Caterpillar Inc., which do business with Israel.

The final tally, which was conducted by a secret ballot during the fifth night of Hanukkah, was 35 votes in favor, 14 against and 14 abstentions. The BDS measure was backed by 51 campus groups and 34 faculty members.

“The passing of BDS at NYU represents a sad shift in anti-Israel sentiment across U.S. college campuses,” Eli Lenner, freshmen class president of the Stern School of Business, told JNS. “BDS is a movement founded by [someone] who doesn’t believe in the right for the existence of a Jewish state. Jewish students at NYU lack proper representation, and because of their lack of a voice, radical movements that are innately anti-Semitic are able to gain traction.”

“Students are being misguided by a movement that operates under the guise of helping oppressed Palestinians, when its real goal is to undermine the rights of the State of Israel to exist,” he added.

Pro-Israel campus groups slammed the resolution and “one-sided” and “discriminatory.”

“It is deeply disappointing that SGA passed a resolution that is so one-sided and discriminatory,” said Ron Krudo, executive director of campus affairs at StandWithUs. “I’m proud of the students who worked so hard to stand up for themselves in the face of a fundamentally undemocratic student government process.”

The university had been subject to criticism after a discriminatory joint statement issued in April by 53 NYU student groups, including Students for Justice in Palestine and Jewish Voice for Peace, which declared that the student organizations would boycott two pro-Israel student groups on campus: Realize Israel and TorchPAC.

TorchPAC expressed pessimism even before the final result.

“We have known since before the introduction of this resolution that unfortunately, this process is unfair, and systematically silenced our community and our voices, which enabled the passage of this resolution,” posted the group on Facebook. “At the meeting, falsehoods went unchecked, rules of order were not followed and only seven members of our community were able to speak for approximately two minutes each. We will continue to show support for pro-Israel students on this campus and be a strong voice against hate. Our community is strong and united. This resolution will not change that.”

Realize Israel echoed TorchPAC’s sentiment and posted on Facebook, “As we light the candles of the fifth night of Hanukkah, we remember that there will always be a glimmer of hope and light will always overcome darkness.”