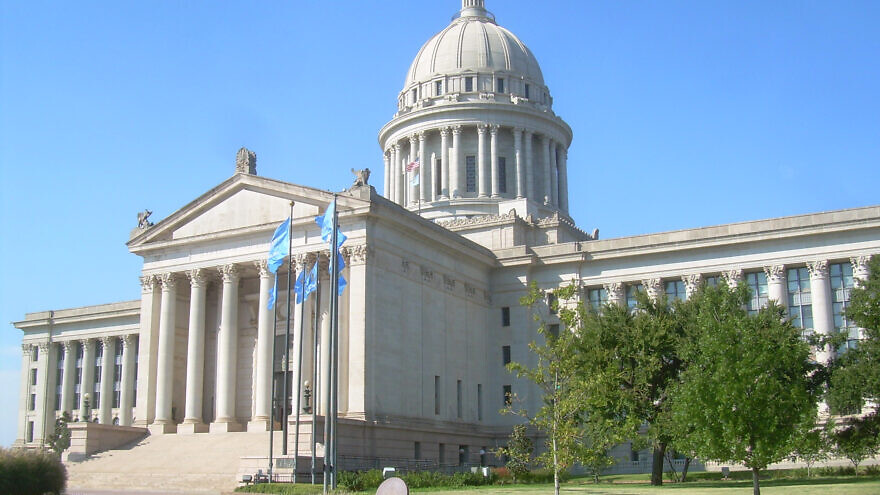 (May 26, 2020 / JNS) Oklahoma has become the 30th state to enact a measure to combat the anti-Israel BDS movement.

The Oklahoma House passed the bill, 75-20, back in March.

Gov. Kevin Stitt, a Republican, signed it into law on May 22.

It declares that Israel is one of Oklahoma’s largest trading partner and is a staunch U.S. ally and it prohibits the state government from entering into contracts with entities that boycott the Jewish state, exempting contracts under $100,000. The new law requires the contractor to submit written verification that it is not partaking in the boycott.

“Companies that refuse to deal with United States trade partners such as Israel make discriminatory decisions on the basis of national origin that impair those companies’ commercial soundness,” states the measure.

Jewish and pro-Israel organizations, including the American Jewish Committee and StandWithUs, applauded the new law.

“Thank you @GovStitt and the entire Oklahoma legislature for making Oklahoma the 29th state to take action against the discriminatory BDS movement. [Oklahoma state Rep. Mark McBride] led the effort which prevents the state from contracting with companies that boycott goods from Israel. #BDSFail,” tweeted the Jewish Federations of North America.

Thank you @GovStitt and the entire Oklahoma legislature for making Oklahoma the 29th state to take action against the discriminatory BDS movement. @RepMcBride led the effort which prevents the state from contracting with companies that boycott goods from Israel. #BDSFail

— The Jewish Federations of North America (@jfederations) May 22, 2020

“We welcome Oklahoma Governor Kevin Stitt’s signing of legislation that prohibits Oklahoma from contracting with companies that boycott Israel,” said the Conference of Presidents of Major American Jewish Organizations in a statement. “We look forward to the remaining states rejecting the pernicious BDS campaign in the days ahead.”