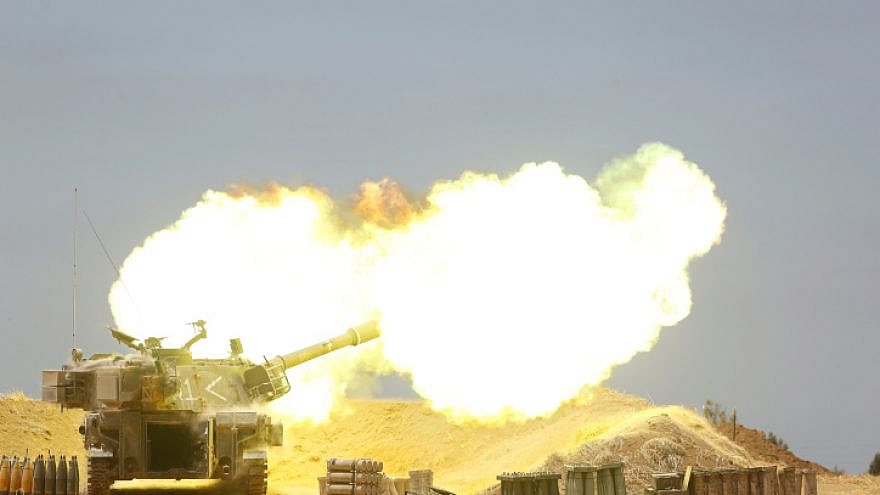 An IDF tank fires into the Gaza Strip near the border following multiple days of heavy rocket and missile barrages launched into Israel by terror factions in Gaza, May 12, 2021. Photo by Yonatan Sindel/Flash90.
Spread the word.
Help JNS grow!
Share now:

(May 12, 2021 / JNS) One Israeli was killed, two were seriously wounded and a third sustained light injuries when Hamas fired an anti-tank missile from Gaza at an Israeli vehicle near the border on Wednesday morning.

The wounded were evacuated to the Barzilai Medical Center in Ashkelon under Hamas mortar fire, Ynet reported.

Soon after the incident, the Israeli Air Force struck two Hamas anti-tank cells, the military said in a statement.

Separately on Wednesday, the IAF struck a terror squad preparing to launch an explosive drone from Gaza into Israel, as well as a Hamas rocket-launcher in the northern Gaza Strip that the military said had been about to fire 10 rockets at Ashdod and Ashkelon.

Palestinian terror factions in Gaza continued to fire short-range rockets at southern Israel throughout the morning on Wednesday. Earlier, a heavy barrage fired at central Israel by Hamas killed an Israeli woman in Rishon Letzion and wounded more than 20 civilians in multiple locations.