(December 14, 2021 / JNS) Israeli Finance Minister Avigdor Lieberman is famous for many things, but tact isn’t one of them. And this week, he outdid himself, displaying a marked lack of sympathy for all the people in one of the country’s key industries—tourism.

It’s pretty rich, so to speak, for the honcho charged with safeguarding and growing the economy to be dismissive of such an instrumental sector. Then again, the former Moldovan’s imitation of Kremlin-like power-wielding is as solid as his rejection of Soviet-style fiscal policies.

Though he subsequently claimed to regret his “wording,” what Lieberman had said during Sunday’s Cabinet meeting was that anyone in the tourism business affected by what is emerging as a new set of draconian coronavirus restrictions—due to panic over the Omicron variant of COVID-19—should “find another job.”

This was after announcing that the government wouldn’t be compensating them for their plight, which he asserted wasn’t going to be ending any time soon. Tough luck.

The outcry that ensued was understandable. Even Israelis who generally oppose nanny-state politics were incensed, mainly because it is the government that decided to close the borders to non-citizens. It is the government as well that keeps coming up with plans—often silly, ineffective or unenforceable—to prevent the spread of what it is incomprehensibly referring to as a “fifth wave” of the pandemic.

Hundreds of industry workers, including tour organizers, guides, bus operators, hotel staff and the like, gathered at the entrance to Ben-Gurion International Airport on Monday to protest both the measures that have been decimating their livelihoods for the past two years—and now threaten to destroy it almost irreparably—as well as the absence of compensation for their state-imposed impoverishment. 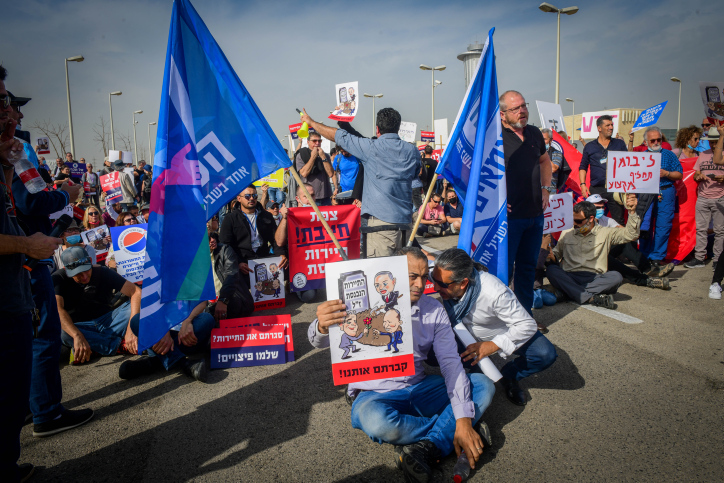 One demonstrator called Lieberman’s comment “detached” from reality and highlighted the fact that it’s “impossible to change professions overnight.”

Others waved “switch jobs” posters to mock the finance minister, while some staged a kind of sit-in on the road to the departures terminal, blocking cars of passengers about to embark on trips abroad. There were also participants who held up signs sarcastically noting the vacation that Prime Minister Naftali Bennett’s wife and kids took to the Maldives—after the premier had gone on TV and urged the public to stay at home.

Defending himself in a faction meeting of Beiteinu, the party that he heads, Lieberman cited the data on which he based his warning that people in the tourism business ought to be seeking a new way to make a living. He pointed out that 4.5 million tourists visited Israel in the year before the onset of the pandemic, as compared with a mere 376,000 in 2021.

“Even if you’re not the finance minister, you can understand that there won’t be 4.5 million tourists [in 2022],” he said.

Thanks to the government of which he is a prominent member, his bleak forecast is undoubtedly correct. It is this sorry situation more than anything else that justifies the demand for compensation. The people in the tourism industry aren’t asking for charity; they want desperately to be working.

Furthermore, Lieberman’s utter insensitivity would have been uncalled for under most circumstances, let alone the current one. Indeed, however one views the COVID-19 regulations—whatever one feels about vaccines and variants—the predicament of swaths of earners directly harmed by the global and local response to a microbe is tragic for them. Nor are they harboring any illusions about returning to the previous security of their fields in the near future.

They do, however, deserve at least a modicum of respect and a whole lot of empathy. Meanwhile, maybe it’s Lieberman who should “find another job.”