(February 1, 2022 / JNS) The Israeli security establishment is warning the country’s political echelon not to get over-excited about the possibility of improving relations with Turkey.

While the possibility of a meeting in Istanbul between Turkish President Recep Tayyip Erdoğan and Israeli President Isaac Herzog, which Erdoğan mentioned only a few days ago, is sparking hope in Israel’s Foreign Ministry, security experts are trying to calm everyone down.

The defense and security apparatus is keeping tabs on the latest romance with Turkey—which used to be Israel’s strategic, military and intelligence partner but which in the past decade has opened its arms to Hamas and other branches of the Muslim Brotherhood in the Middle East. Officials are also worried that a number of understandings and agreements between Israel and allies such as Egypt, Greece and Cyprus could be affected if Jerusalem moves toward Ankara.

Information making its way to the defense and security establishment these past few months is worrying. While Erdoğan is laying the groundwork and preparing Turkish public opinion for a change in relations with Israel, and senior Israeli officials are in contact with the head of Turkey’s National Intelligence Organization Hakan Fidan, a Hamas command continues to operate in Turkey and execute terrorist attacks and attempted attacks in Israel, Judea, and Samaria.

Israel is looking into a recent report that Turkey has deported a number of Hamas operatives, but in general, Hamas in Turkey continues to operate its Istanbul headquarters, recruiting Arab Israelis and Palestinian Arabs for intelligence work and to carry out terrorist attacks. Senior Hamas member Salah al-Arouri, whom Turkey supposedly deported at Israel’s request, continues to handle his people there and even organize training and target practice in Turkey.

The possibility that Turkey and Israel could resume cooperation on intelligence is also causing some misgivings. Israel used to be worried that Turkey handed Israeli information over to Iran. Foreign media reports claimed that Turkey has exposed the identities of local Iranian agents who met with their Mossad handlers, and former Israeli Prime Minister Ehud Barak used to say that Fidan was “pro-Iran.”

The fact that a few leaders of Turkey’s defense establishment today are identified as Muslim Brotherhood members, along with Turkey’s ties with Iran, does nothing to boost the low level of trust between Israel and Turkey. 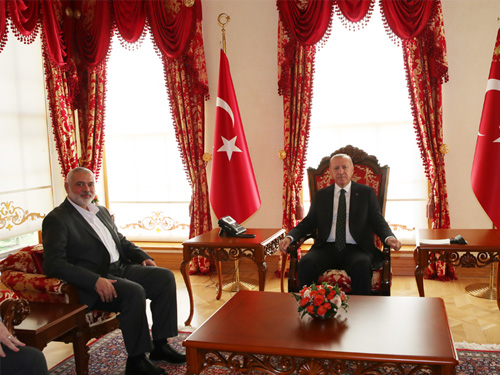 From Iran to Turkey to the West Bank

Only a month-and-a-half ago, the Israel Security Agency (Shin Bet) arrested four members of a Hamas cell in the village of Zurif, near Hebron. The cell had been directed from Turkey by Abd Rahman Raminat, an associate of Arouri who was released in the prisoner exchange deal for captive soldier Gilad Schalit.

The Hamas network in Judea and Samaria that the Shin Bet exposed a month prior to those arrests, which was plotting major terrorist attacks, including shootings, abductions and suicide bombings, was also being handled from Turkey by Arouri and Zakria Najib, an eastern Jerusalem native who was one of the men who kidnapped IDF soldier Nachshon Wachsman and who was also released in the Schalit deal. 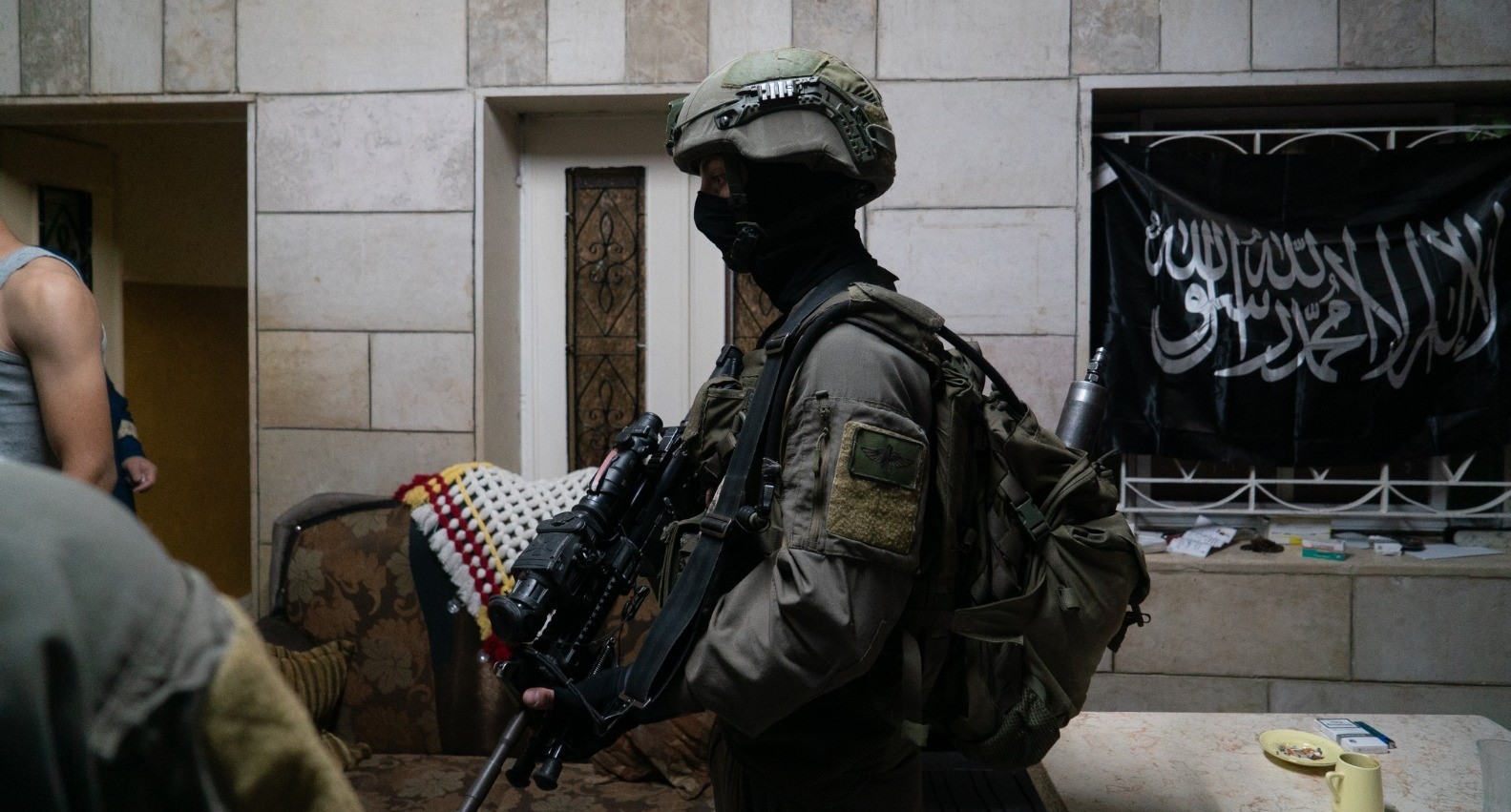 Now Najib is once again at the heart of things, and once again running a terrorist infrastructure, exposed at the end of 2021 and which included 50 Hamas members from different parts of the West Bank. Israel, in a gesture of thanks to Turkey for releasing Natali and Mordi Oknin, postponed the announcement about the network. The Israeli couple was arrested in November and charged with espionage, for taking pictures of Dolmabahce Palace in Istanbul.

The Shin Bet statement about the West Bank network reported that agents had recovered weapons, explosives belts and guns, as well as considerable sums of money. The message left out the name of the country from which the money originated: Turkey.

Turkey has long since become a base from which Hamas handles its monetary operations and funds terrorist plots in Judea and Samaria. On Sept. 10, 2019, the U.S. Commerce Department announced it would be applying sanctions to 15 terrorist operatives and money changers that help terrorist organizations, and published a list that included operatives and companies in Turkey that helped transfer money to Hamas.

The Americans also reported that the main source of the money sent to Hamas from Turkey (and sometimes through Lebanon) is Iran and that Iran’s Quds Force is responsible for directing the funds.

The American report mentioned the name Zaher Jabarin, a high-ranking Hamas official in Turkey, as having sent hundreds of thousands of dollars to Judea and Samaria to fund Hamas terrorist activity.

Israel suspects that Jabarin, who has been appointed deputy leader of Hamas in the West Bank, is still involved in similar activities from Turkey and that he was involved in a recently exposed system of money transfers in the West Bank. Jabarin is responsible for building up Hamas’ military capabilities from the organization’s headquarters in Istanbul.

The headquarters also oversees the development of Hamas’ maritime and rocket capabilities, as well as its cyber-warfare, development of new weapons, and the transfer of Iranian money. It also has a branch in Lebanon, and Israel has demanded that Turkey put a stop to all these activities.

An interesting question that has yet to be answered, at least publicly, is whether the killer of Eliyahu David Kay in the Old City of Jerusalem some two months ago was trained and handled from Turkey. Fadi Abu Shkhaydam, a prominent opponent of Jews being allowed to visit the Temple Mount, and who had connections to senior members of the Jordanian Waqf on the Temple Mount, paid a number of visits to Turkey in recent years, meeting with Hamas operatives there.

After he killed Kay, Shkhaydam and his family were “congratulated” by Arouri and Hamas leader abroad Ismail Haniyeh, who oversee the direction of terrorist attacks in the West Bank from Turkey, Lebanon, Qatar or wherever else he happens to be. 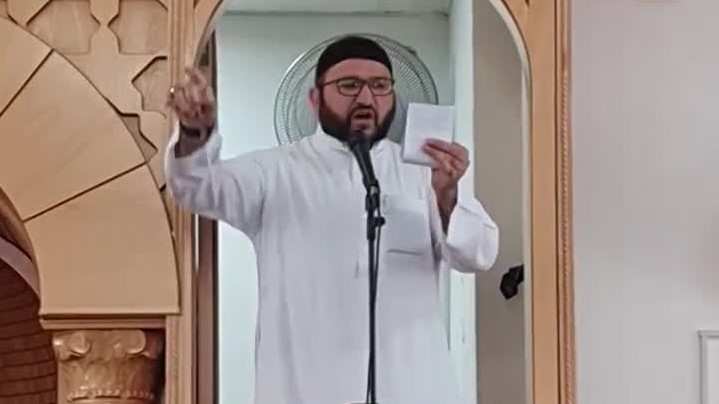 Fadi Abu Shkhaydam, seen here delivering a sermon in 2020, killed one Israeli and wounded four others in Jerusalem’s Old City on Nov. 21, 2021, before being shot and killed by Israeli security forces. Credit: MEMRI.

As if that weren’t enough, a couple of weeks ago a senior Waqf official, Fadi Alian, was arrested. The indictment filed against him in the Jerusalem District Court says that Alian had purchased a homemade submachine gun near Nablus and given it to a family member, who used it to carry out three shooting attacks on police in eastern Jerusalem. Alian, like Shkhaydam, was part of attempts to attack Jews visiting the Temple Mount.

There is another piece of information that points to the key role Turkey plays in Hamas’ terrorist operations. About six weeks ago, Israeli Interior Minister Ayelet Shaked signed an order preventing 11 residents of eastern Jerusalem known to be high-ranking members of Hamas and Al-Shabab al-Aqsa from leaving the country. Shaked was presented with hard intelligence about each one showing that they were poised to receive instructions from Turkey about when and where to commit terrorist actions.

Did Shkhaydam receive similar guidance? There is no clear answer, but Shaked signed the orders three weeks after Kay’s murder. 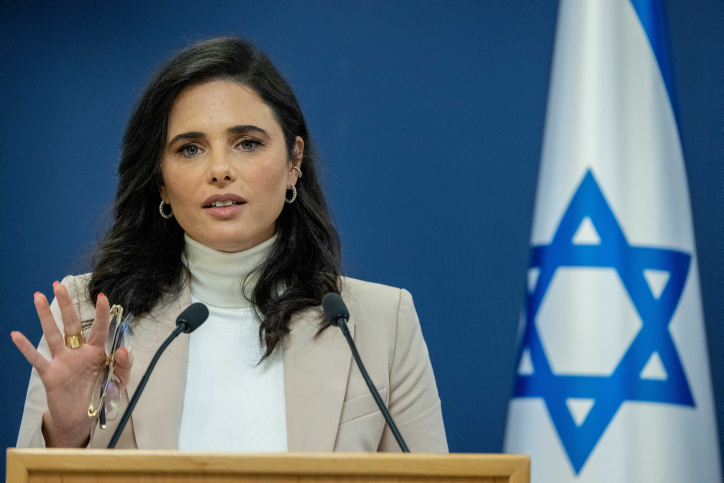 Interior Minister Ayelet Shaked speaks at a press conference at the Finance Ministry in Jerusalem, Oct. 31, 2021. Photo by Yonatan Sindel/Flash90.

According to the information presented to Shaked, among the 11 eastern Jerusalem residents not allowed to leave the country is Sufian Fahri Abdu from Jabel Mukaber. Some 20 years ago, he plotted to poison diners at a restaurant in central Jerusalem. In total, he has spent 16 years in prison.

The group also reportedly includes Nasser Issa Jalal Hadmi, who wasn’t allowed to leave the country even when Aryeh Deri was serving as interior minister. Hadmi and four others were barred from traveling for allegedly transferring money from foreign countries to Hamas in Israel; supporting the Murabitat project on the Temple Mount to keep Jewish visitors away through steady harassment; and promoting dawa activity to set up communal and educational institutions that operate according to the ideology of Hamas and the Muslim Brotherhood.

Another detainee on Shaked’s list is Rami Zakaria Ibrahim Barakeh from Sur Baher, who has served time in prison for Hamas activity. The Shin Bet says Barakeh was a high-ranking member of Hamas in Eastern Jerusalem and active in a project Hamas cooperated on the Temple Mount with the Northern Branch of the Islamic Movement, which like the Murabitat was designed to prevent visits by Jews.

Approximately a year and a half ago, Israel handed Turkey intelligence, including a list of names, indicating that Hamas operatives were handling terrorism against Israel from the organization’s offices in Istanbul. For years, Israel has been demanding that Turkey deport dozens of Hamas operatives, some of whom have even adopted Turkish citizenship, noting that the ongoing Hamas activity in Turkey goes against understandings between Turkey, Israel and the United States. Particularly understandings reached in the reconciliation agreement that supposedly ended the Turkish-Israel crisis that followed the 2020 Mavi Marmara incident.

Turkey has consistently denied that Hamas is organizing any terrorist activity from inside its borders and claims that the organization’s work in Turkey is strictly “political,” and thereby does not violate the understanding. 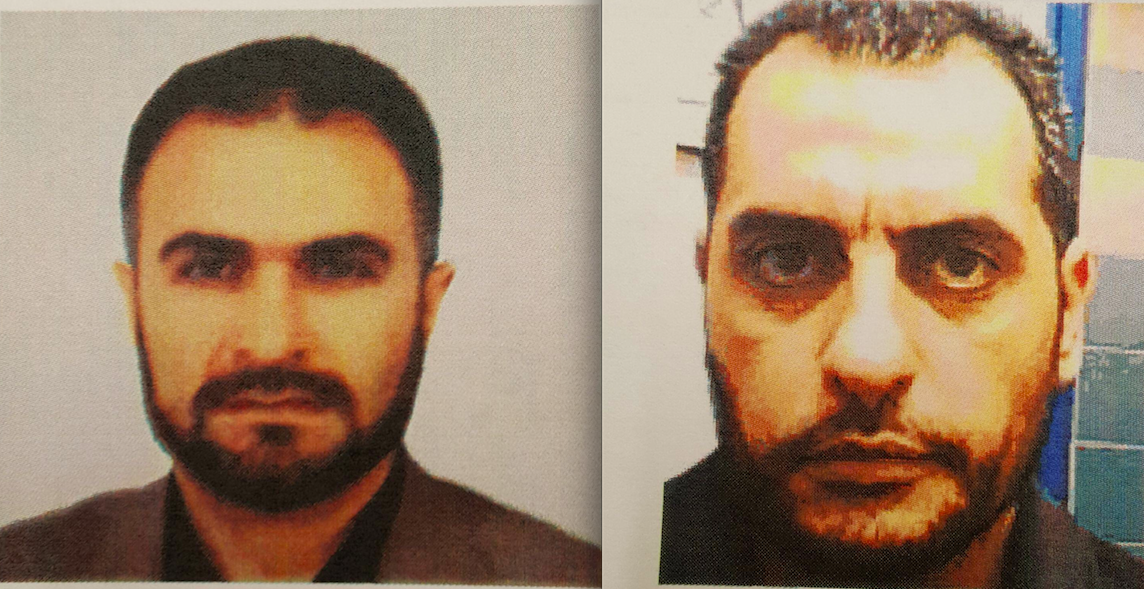 As Turkey continues to woo Israel, an unusual message the Shin Bet put out a few years ago, just after Israel deported Turkish lawyer Cemil Tekeli, who was recruited by Zaher Jabarin, is still relevant. At the time, the Shin Bet said that “Turkey is contributing to Hamas’ military growth” and that “Hamas’ extensive military and financial activity in Turkey continues without any hindrance, with the Turkish regime ignoring it and sometimes even encouraging it, and help from Turkish civilians, some of whom have ties to the regime.”

Israel security and defense establishment want to remind the government of these warnings after months in which Turkey tries to cozy up to Israel while attempted terrorist attacks and terrorist plots Hamas directs from Turkey are continually thwarted.