(July 12, 2021 / Jerusalem Center for Public Affairs) On July 5, Ethiopia announced that it had begun the next stage of filling the massive Grand Ethiopian Renaissance Dam (GERD) reservoir. The parties involved—Ethiopia and the downstream nations of Egypt and Sudan—have apparently exhausted all rounds of negotiations on water-sharing and have reached a dead end.

In response to the Ethiopian move, the Egyptian Foreign Ministry declared, “This step amounts to a dangerous escalation and exposes the ill intent of Ethiopia and its desire to create a fait accompli against the two downstream nations without heed to the negative consequences and harm that could come to them.”

The Sudanese government warned, “The unilateral filling for a second consecutive year poses an imminent danger and threat to Sudan.”

The U.N. Security Council is set to discuss Ethiopia’s plan on July 8 at the request of council member Tunisia.

The unilateral second filling of the reservoir is considered by Egypt to be an existential threat, and Sudan regards it as a threat to its population and infrastructure. While Sudan has been cautious not to proclaim its readiness to respond with force when the filling starts, Egypt has repeatedly said that it would consider such a step by Ethiopia to be a fait accompli and as such, a casus belli. 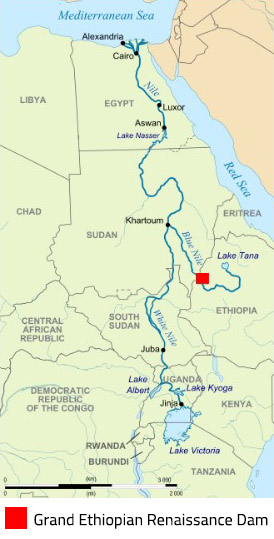 A few months ago, reports circulated in Egypt suggesting that Egypt’s Armed Forces planned a surprise attack on the dam on Oct. 6, employing the same pattern conducted by Egypt against Israel in the 1973 Yom Kippur War.

In order to show Ethiopia their seriousness about the dangers to Sudan’s and Egypt’s vital lifeline, the two countries conducted highly publicized, joint military maneuvers in recent months. In November 2020, the two countries began a series of joint military drills (named “Nile Eagles 1” and “Nile Eagles 2”), with the latest being conducted in May 2021 (“Guardians of the Nile”). The high-profile exercises included mock attacks by naval, air and ground forces, as well as special forces, signaling to Ethiopia their intentions to secure the water sources of both countries. Ethiopia responded by beefing up its deployment along the Sudanese border.

Four major interests are at stake for the three nations

Water: The essence of the dispute, the second filling of the GERD would endanger the water supply which supports life in Egypt. (Ethiopia seeks to fill the dam reservoir over seven years; Egypt demands a period of 12 to 21 years.) The 74 billion cubic meters Ethiopia intends to hold in its reservoir (equivalent to almost 20 times the capacity of Israel’s Sea of Galilee) is Egypt’s actual share of the Nile for 18 months. As for Sudan, the issue deals mainly with retaining the waters on the Blue Nile that could endanger its own dams on the river. However, unlike Egypt, which has no common borders with Ethiopia, Sudan possesses a real means of pressure. Profiting from the Tigray war, Sudan retook areas on the Sudanese-Ethiopian borders (Al-Fashaqa area), which had been annexed de-facto by Ethiopia.

Energy: At full capacity, GERD is touted to produce 6450 megawatts, which is well above Ethiopia’s energy needs. Ethiopia intends to export surplus energy to neighboring countries—which happen to be Egypt’s energy customers. Egypt’s surplus stands today at almost 50 percent of its energy production of 58,000 megawatts. Egypt sells its energy at 7 cents per kilowatt while Ethiopia is planning to undersell Egypt at 6 cents per kilowatt. Those pennies add up to billions of dollars.

African Status: Egypt and Ethiopia are rivals on the African continent. Ethiopia is in the heart of Africa and is the residence of the most diplomatic African institutions and forums. Unlike Ethiopia, Egypt has always sought a double identity—Arab and African—to dominate the political scene on the continent. Both Ethiopia and Egypt have been actively recruiting and rallying the support of African countries to their cause, and especially seeking the support of the nine other countries that share the Nile’s waters.

Israel: The Egyptian opposition has long tried to link Israel to Ethiopia’s aggressive activities. Israel has been accused of providing Ethiopia with its “Iron Dome” anti-missile defense system to protect the dam from air attacks, a rumor that has been denied forcefully by Israel. Egyptian sources have also pointed at Israeli companies which were supposedly involved in the construction of the dam. In 2016, Prime Minister Benjamin Netanyahu stated during his official visit to Ethiopia that Israel would like to expand its cooperation in the fields of agriculture. This was seen as a sign of Israel’s interest in the construction of the dam.

Some Egyptian politicians charge that foreign entities seek to diminish Egypt’s regional influence by reducing its water resources. One former minister even linked Israel’s involvement in Ethiopia to claims that Ethiopia considers itself a descendant of the tribes of Israel.

In view of the above, what are the options open to Egypt? Egypt has made it clear that it will not sit passively while the water reservoir is filled.

1. Egypt has already filed a complaint with the U.N. Security Council and most probably will seek the imposition of a UNSC resolution on Ethiopia that would halt the filling while establishing a mechanism for negotiations under the supervision of the Council and led, most probably, by the United States.

2. In parallel, Egypt will also try to condemn Ethiopia in the African forums such as the African Union Organization and delegitimize its unilateral acts.

3. Although it’s not likely that Egypt will resort to military force, the option cannot be ruled out. For those who doubted Egypt’s capability to project air power to Ethiopia without the active participation of Sudan (which would put its airfields at Egypt’s disposal), Egypt demonstrated recently that it could conduct refueling missions for its combat aircraft. The distance between Egypt and Ethiopia is thus surmountable.

A showdown between Ethiopia and Egypt could come soon. Egyptian and Ethiopian leaders will suffer if their actions and reactions show weakness and a lack of resolve. Therefore, the Renaissance Dam will probably become the next flashpoint that could reverberate throughout the Middle East and Africa.