(November 23, 2020 / JNS) It was about time. Almost exactly 35 years to the day after Jonathan Pollard and his former wife, Anne, were refused entry to the Israel embassy in Washington, the spy that the Jewish state’s operatives abandoned is being allowed to fulfill his dream of making aliyah.

The U.S. Justice Department could have extended the onerous conditions placed on his parole after his 2015 release from federal prison. But in one more friendly gesture towards Israel from the Trump administration, the DOJ passed up the chance to keep Pollard in the United States. As a result, the 66-year-old is now free to do what he has always said was his wish: to live the rest of his life in Israel.

The appalling events that led to Pollard—an American Jew who was employed as an analyst for the U.S. Navy who spied for Israel—to seek asylum in the embassy on Nov. 21, 1985, were part of one of the greatest blunders in Israeli history. Israeli diplomats had no choice but to close the door in the face of the desperate Pollard, lest they make an already catastrophic situation even worse. He wound up serving 30 years in federal prison, some of them in solitary confinement, after being sentenced to life in prison for the crime of betraying his oath and delivering a massive amount of U.S. intelligence to Israel.

His plight and the disproportionate sentence he received—no one who spied against the United States for an ally, as opposed to an enemy, has ever received anything close to such a long term in prison—made Pollard something of a hero to many American Jews, as well as most Israelis. Many believe that his actions were vital to Israeli security and saved lives, something that is a matter of conjecture and may never be fully known until the files on his case are revealed, if indeed they ever are. More to the point, there is a sense among Israelis that what happened to him violated a cardinal precept of the country’s military ethos: that no soldier should be left behind.

To his credit, Prime Minister Benjamin Netanyahu has always taken seriously his country’s obligation to get Pollard out of prison and to Israel. That was not true of some of his predecessors, and at this point, it is appropriate not just to celebrate Pollard’s arrival in Israel, but to assess the damage that his actions—and those of his Israeli handlers and their superiors did—not just to the spy, but to the U.S.-Israel relationship and to American Jewry.

Pollard was not the super-spy villain responsible for grave harm to American interests that some in the U.S. security establishment depicted him as being as part of their successful campaign to keep him in prison for so long. Indeed, the notion that the secrets he gave Israel were somehow conveyed to the Soviet Union undermining U.S. intelligence and costing lives is a myth that was debunked once it became clear that the Russians had highly placed spies of their own in Washington, including the CIA’s Aldrich Ames and the FBI’s Robert Hanssen. The all-out effort by then-Secretary of Defense Caspar Weinberger to see Pollard locked away for life seemed to stem from prejudice against Israel that seemed almost to border on anti-Semitism. 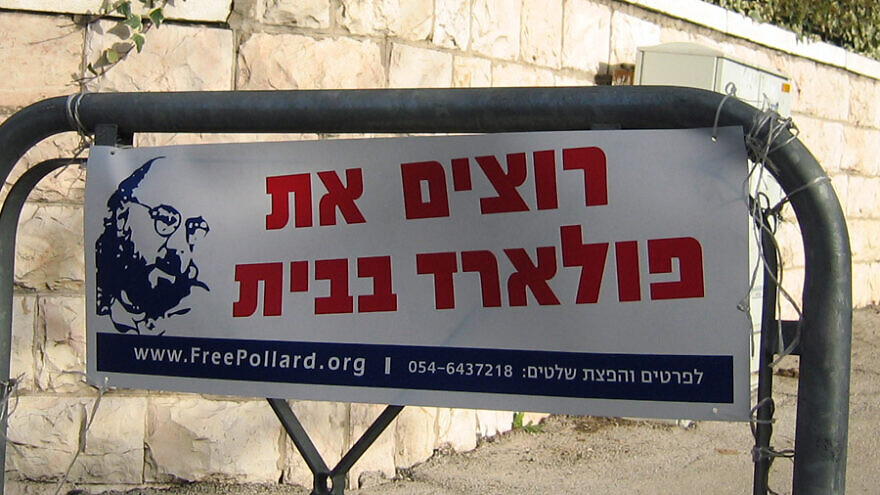 As I wrote in a detailed essay in Commentary on the 25th anniversary of the case, Pollard’s long sentence was also the result of near-criminal blunders committed by his defense team, coupled with a foolish decision by the spy and his wife to make public appeals for sympathy in which they treated his actions as justified. That was seen by both federal prosecutors and the judge in the case as violating the plea deal he had negotiated, allowing them to unfairly lock him away for life without the trouble of conducting a full trial.

But by the same token, he doesn’t deserve to be called a hero. The havoc he caused far outweighed any speculative help he may have given Israel.

Pollard’s aspiration to help Israel came from a genuine desire on his part to help the besieged Jewish state with which he felt such a strong affinity. After hearing a presentation to a Jewish audience from Col. Aviem Sella, the pilot who led the Israeli strike on the Iraqi nuclear reactor in 1981, the 29-year-old Pollard reached out with an offer to help. Sella ultimately placed Pollard in the hands of LAKAM, a special scientific intelligence-gathering unit of the Defense Ministry headed by veteran spy Rafi Eitan, who among other accomplishments was part of the team that captured Nazi war criminal Adolf Eichmann. Eitan also had close ties to Yitzhak Shamir and Yitzhak Rabin, then prime minister and defense minister of Israel. Decades later, he became a successful politician and served in Israel’s Cabinet.

Pollard brought classified material to their first meetings with Sella in 1984, and that was just the beginning of an avalanche of intelligence he gave the Israelis over the next year, including satellite photos, secret memos and reports, and even documents that had references to U.S. sources. This gave Israel the ability to track American intelligence operations in the region that might have assisted the 1985 Israeli Air Force strike on the PLO headquarters in Tunisia. Pollard also gave the Israelis the 10-volume “U.S. Radio and Signal Intelligence Manual,” the theft of which ultimately cost the Pentagon—and U.S. taxpayers—billions of dollars since the compromise of these secrets meant the entire system had to be replaced.

Pollard sought no compensation from the handlers he looked up to as heroes. But the ruthless Eitan believed that it was necessary to morally compromise Pollard so as to better control him. To his shame, Pollard succumbed, and took money and jewelry for his wife, who had also been dragged into the scheme.

Nor can it be argued, as some of his defenders claimed, that Pollard’s spying was justified because the United States was holding back information that could have helped Israel. That wasn’t Pollard’s decision to make, and even if it was true, he could have helped Israel more—as well as spared himself and his family much trouble and grief—had he resigned and spoken out about the issue.

Jerusalem downplayed what had happened, and those involved did their best to cover their tracks.

Had Eitan and his political bosses not been so influenced by the size and the significance of the haul their new agent brought them, perhaps they would have come to their senses and understood that what they were doing was a blunder. After all, Israel’s Mossad had promised not to spy on its CIA partners, a pledge that was all the more significant because it was during this period that the administration of President Ronald Reagan was upgrading ties with Israel to that of a strategic ally. Israel’s relationship with its sole superpower ally was far more important than a desire for a treasure trove of information, not all of which was likely directly relevant to the defense of the Jewish state.

Once Pollard’s disloyalty was revealed—something that his unstable behavior, carelessness and the scope of his thievery made inevitable—it became obvious that the decision to run an agent in the Pentagon would have serious consequences. Equally important, the implications of Eitan’s decision to do something that as a rule Israel generally seeks to avoid—recruiting a local Jew to spy on their own country—would be just as serious. The fact all of the Israelis involved in the caper were able to flee the country while they made no provision for extracting Pollard once he fell under suspicion was even more disgraceful.

Once Pollard was caught, Israel tried to pretend it was a rogue operation. This was a lie since Eitan had sought permission to go forward with the scheme from his superiors. It’s also undoubtedly true that the information he supplied almost certainly went straight to the top of the political food chain of the coalition government that was running the country in the time, thereby implicating Shamir and Rabin, as well as Foreign Minister Shimon Peres.

Instead of cooperating fully with the Americans as they promised, Jerusalem downplayed what had happened, and those involved did their best to cover their tracks. Indeed, as long as any of that famous trio was in power, Israel did nothing to help, let alone to recover Pollard.

The entire affair created unnecessary tension between the two allies that lasted for decades.

What followed was a long-running shadow play in which many American Jews and Israelis portrayed Pollard as a martyr to anti-Semitism—something that only undermined the otherwise strong case for clemency for him and also hardened the desire of U.S. intelligence to keep him in prison in order to make an example of him. Eventually, he even became a bargaining chip in which his release was offered as an inducement to make Israel make territorial concessions in peace negotiations, though in the end, Netanyahu’s efforts to get President Bill Clinton to free him in this manner ultimately failed.

While the value of his spying and the damage he did to America remains a matter of debate, what isn’t in question is that this affair created unnecessary tension between the two allies that lasted for decades.

Just as bad was the shadow that his spying cast on the loyalty of every Jew working in the Pentagon. Indeed, U.S. authorities spent many years hounding Jewish personnel searching for another mythical Israeli spy, harming the careers of many Jews. It also fed into an anti-Semitic narrative that dovetailed with the “Israel Lobby” myth that portrayed the United States as being ruthlessly manipulated by Jews who were more loyal to Israel than to America.

It is only right that the ordeal of the spy, who paid far more dearly than he should have for his mistakes (Pollard served more time in prison than many murderers), is over. Let’s hope that after so much suffering, he finds some peace in Israel and will avoid doing anything that will fuel a revival of the controversy he engendered.

But it is just as important that his many supporters not misinterpret what happened to him as being solely a morality tale of a heroic Jew who was persecuted by anti-Semites for helping Israel. Both the hapless Pollard and his cynical Israeli handlers—none of whom were ever truly held accountable for their part in this fiasco—supplied ammunition to those anti-Semites who falsely claim that there is a contradiction between being an American patriot and having a deep concern for Israel. Sadly, that will remain Jonathan Pollard’s true legacy long after he has completed his journey to the Jewish state.