(September 24, 2021 / JNS) When the leading scholar of Jewish literature of our time chooses to write a memoir of her career, it is hardly a surprise that its pages are filled with the names of the great writers she has encountered and studied. Ruth Wisse is currently a senior fellow at the Tikvah Fund, but prior to that, she helped found the Department of Jewish Studies at McGill University in Montreal and then became Professor of Yiddish and Comparative Literature at Harvard University.

Wisse is the author of the seminal work The Modern Jewish Canon: A Journey Through Language and Culture, published in 2000, which remains a must-read for anyone who aspires to Jewish literacy, as well as a number of other important works such as the 2007 Jews and Power. But as much as her new memoir, Free As a Jew: A Personal Memoir of Self-Liberation, speaks of her lifelong love affair with Yiddish and literature, its primary purpose is to reflect the Jewish history that she has witnessed in her lifetime.

Born Ruth Roskies in the city of Czernowitz (now Chernivtsi, Ukraine) in what was then Romania in 1936, her parents were natives of Vilna, then part of Poland, and the home of a great tradition of Torah study as well as a hotbed of Yiddish culture. When her family fled Romania as the Soviets invaded in 1940, they eventually made their way to Canada, where she grew up in the city of Montreal. But the family, and especially Ruth’s mother Masza, took the legacy of Vilna and its great Jewish poets with her.

She grew up in a Yiddish-speaking household in which the language of Eastern European Jews was a living Jewish language and not treated as either an artifact of history or a political statement. Many, if not most, of Yiddish’s champions in the first half of the 20th century linked it to either the beliefs of the Socialist Bund movement that opposed Zionism or to Soviet communism, which used it as an instrument of a totalitarian movement that sought to extinguish Jewish national identity. Instead, she came naturally to the idea that love of the heritage of European Jewry and Zionism (whose advocates sometimes disparaged Yiddish at the expense of Hebrew) were not only compatible but both indispensable aspects of Jewish civilization.

Integral to her tale is that of her love affair with Jewish literature, and in particular, great Yiddish poets like her hero Avrum Sutzkever, a leading figure of the “Young Vilna” venerated by her parents and among the greatest to record the struggles of 20th-century Jews in verse. Wisse is rightly celebrated as an important translator and interpreter of Jewish writing. Other famous writers and poets appear in her book, including fellow Montrealer Leonard Cohen, as well as international figures like Isaac Bashevis Singer, Elie Wiesel and Norman Podhoretz—the editor of Commentary magazine, who offered Wisse a unique platform to reach a broader audience than her students—and New Republic publisher Martin Peretz, who endowed her professorship at Harvard. But this is no compendium of well-known names to be dropped or merely a “Who’s Who?” of late 20th-century and early 21st-century Jewish letters. 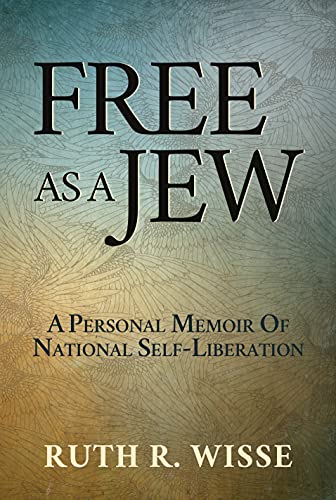 The cover of “Free As a Jewish: A Personal Memoir of Self-Liberation.”

Rather, it tells a story of how Wisse built a life and a career celebrating the glories of a literary tradition that had yet to be accorded the respect it deserved. At the same time, she was slowly finding her own path as a voice on behalf of Jewish rights and against both anti-Semitism and the woke toxic ideas of the left that she encountered along the way in the academy.

Part of this involved the difficulties involved in getting academic establishments, including those run by Jews, to accept the idea that specifically Jewish topics, especially Yiddish, were worthy of academic study. Indeed, after graduating from McGill, where she would later teach, she attempted to get a Ph.D. in Jewish literature at Columbia University but was thwarted by the contempt for her field shown by a Jewish academic. The phenomenon of anti-Jewish Jews is a theme that runs throughout the book. That is true both in terms of what happened on campuses as she blazed a trail for Jewish scholarship and in a surrounding world in which Jew-hatred came back into fashion, coupled with the fading memory of the Shoah, which her family had fled.

This theme of resistance to woke politics and the process by which she learned to most effectively combat the enemies of Jewish life is important to the book. It’s equally true that Free as a Jew is about gratitude for being able to live in freedom in Canada and the United States, and to bask in the strength of a reborn Israel, which she rightly terms a miracle that should never be lost on us. It’s also not exactly a “how to succeed in academia” instruction manual for young Jewish women to emulate. That’s because while she was herself a great success, she considers her choice to embrace marriage to Len Wisse and family—and let her career develop only incrementally—to be her wisest personal decision.

But as much as Wisse is keen to laud great Jewish writers and to encourage their study, she is at least as concerned that her readers understand the potent threat to Jewish life that now emanates from the academy and the terrible manner in which it has begun to influence public life in the West.

Wisse’s account of her two decades at Harvard, where she arrived in 1993 as a celebrated scholar, is a cautionary tale of how elite institutions succumbed to bad ideas often connected to and enabling anti-Semitism and anti-Zionism, and then helped spread them elsewhere. As she put it when referring to the way economist Lawrence Summers was forced out as president of Harvard after making some politically incorrect remarks, “The surrender by America’s premier university to anti-intellectual assaults marked a point of no return.”

During this period, Wisse developed a reputation as a courageous and often lonely voice in the wilderness decrying the anti-intellectualism connected to the left’s obsession with race at the expense of every other consideration, and in which Israel and the Jews found themselves targeted as possessing white privilege. If she has any regrets about any of these struggles now, it is that she was slow to realize just how dangerous these trends were, and that they needed to be denounced at every opportunity rather than ignored, as she initially thought best.

Indeed, even her beloved Yiddish is once again being subverted by leftists who are only interested in it as a cudgel to use against Israel. Though she began as a literary specialist, her journey and the need to speak up for the Jews eventually transformed her into of one the leading voices against contemporary anti-Semitism, whose rise in the West she rightly regards as a troubling omen for a Jewish community that is often slow to understand the threats against it and too besotted with the false rhetoric of the left to realize just how dangerous the enabling of Jew-hatred by radicals has become.

Still, Wisse’s personal story is inspiring and carries a positive message. If she thinks of her life as an odyssey towards a “personal liberation,” it’s because she rightly believes that the journey of the Jewish people has, despite setbacks and threats, also been one of self-liberation during her lifetime. Ruth Wisse not only witnessed that liberation in the form of a thriving Jewish state but has done much to aid its defense. Those who wish to understand not only her life but the triumphs and problems that the Jews have encountered during this period can do no better than to start by reading this book.