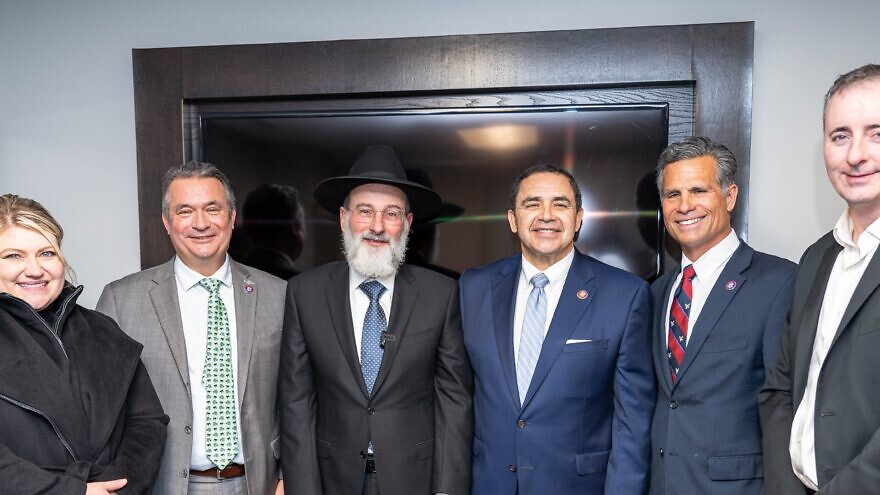 (January 19, 2022 / JNS) Members of both parties in Congress inaugurated a new Congressional Caucus on Monday to focus on Jewish issues such as the rise of anti-Semitism and unfair treatment in Jewish communities.

According to a news release by the Orthodox organization Dirshu, the Congressional Caucus for the Advancement of Torah Values will discuss ongoing issues of concern to Jews in the United States, Canada and the world.

Reps. Don Bacon (R-Neb.) and Henry Cuellar (D-Texas) will co-chair the caucus, which was spearheaded by Rabbi Dovid Hofstedter—a Canadian real estate investor, philanthropist, and the founder and president of Dirshu, headquartered in New Jersey and started in 1997.

“Torah values have been under attack for many years—basic values such as the deep respect for religion, for human dignity, honesty, integrity, self-sacrifice, charity, compassion and empathy. These values are the foundation of the USA,” he said at a ceremony at the U.S. Capitol, according to the release.

“As members of Congress, your attendance and participation here demonstrate your personal commitment to supporting Jewish values and to promoting unity. I feel a deep sense of encouragement about what lies ahead, and I intend on conveying your messages of encouragement to all members of our organization in your respective districts. We at Dirshu look forward to working together in the months and years to come, to ensure that freedom of religion is never abridged and that never again, in fact, remains just that—never again,” said Hofstedter.

Members in attendance at the ceremony were asked to “continue to be more clear and forceful” in their condemnation of anti-Semitic acts against Jews, especially those who are targeted for being visibly Jewish, Orthodox Jews, and on college campuses.

Hofstedter also said the caucus will focus on the “uneven-handed” lockdown measures enforced by city and state policies against synagogues and yeshivahs in many major cities.

“The purpose of this caucus is to pledge our friendship to our Jewish friends, our brothers and sisters,” said Bacon, according to the release. “We are 100% standing with you against anti-Semitism in any form. I don’t care where it comes from—left or right.”

“This caucus is going to be so important in a bipartisan way,” said Cuellar. “We have to be able to have the strength so we know what’s good, what’s bad, what’s moral and what’s not moral.”