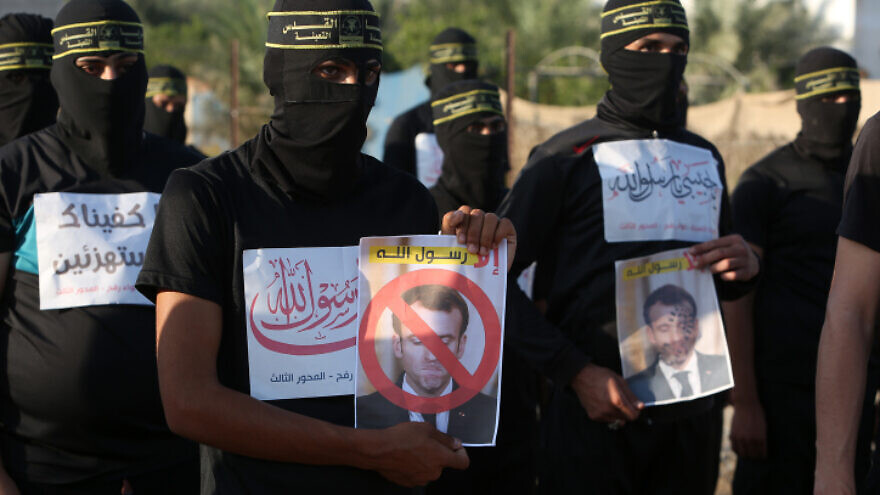 Members of the Al-Quds Brigades, the military wing of the Palestinian Islamic Jihad, hold pictures of French President Emmanuel Macron during a protest march in the southern Gaza Strip against the reprinting of a cartoon of the Prophet Muhammad in France, on Oct. 26, 2020. Photo by Abed Rahim Khatib/Flash90.
Spread the word.
Help JNS grow!
Share now:

(October 28, 2020 / MEMRI) Palestinian Islamic scholar Sheikh Ali Abu Ahmad said in a recent address at the Al-Aqsa Mosque in Jerusalem that the “answer to lowlife French President Emmanuel Macron” was to “don the garb of war” and crush Paris.

Fury against the French leader has been growing over his perceived attacks on Islam and the prophet Muhammad following the murder and beheading of French schoolteacher Samuel Paty on Oct. 16 for showing a cartoon of Muhammad during a class on free speech.

In his Oct. 25 speech, Abu Ahmad said that the proper response to France, “the rulers of the wicked mini-states and to all the infidels who have acted with insolence against Islam and Muslims” was the threat of war.

Calls “here and there” for boycotts of French products were useless, he said. Such boycotts had been tried against Sweden and Denmark and had not achieved a thing, he added.

“Oh servants of Allah, the only solution is the return of the caliphate,” he said. “The Muslim caliph will lead the Muslim armies, and they will crush Paris completely, making them forget the whispers of Satan.”

The video was uploaded to the “Al-Aqsa Call” channel on YouTube.