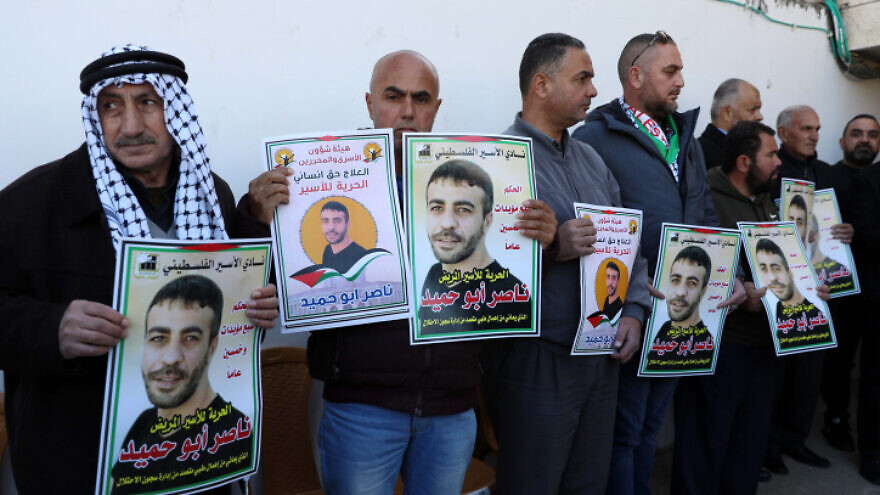 Abu Hamid co-founded the Al-Aqsa Martyrs Brigades during the Second Intifada. In December 2002, he confessed in Jerusalem District Court to killing seven Israelis.

He was sentenced by an Israeli court to seven life sentences and 50 additional years’ imprisonment. He also was convicted of 12 counts of attempted murder and other charges. He is believed to have murdered additional Israelis.

According to the Almagor Terror Victims Association, on Oct. 12. 2000, Abu Hamid was photographed taking part in the desecration of the bodies of IDF reservists Vadim Nurzhitz and Yossi Avrahami during the Ramallah Lynching; on Dec. 21, 2000, he murdered Eli Cohen in a shooting attack near Giv’at Ze’ev; and on Dec. 31, 2000, he murdered Rabbi Binyamin and Talya Kahane in a shooting attack near Ofra.

Also according to Almagor, he planned the February 2002 attack in Jerusalem’s Neveh Ya’acov neighborhood in which policewoman Galit Arbiv was murdered and 10 civilians were wounded; directed the February 2002 murder of Gadi Rejwan in the Atarot industrial zone in Jerusalem; and was responsible for the March 2002 bombing at the Seafood Market restaurant in Tel Aviv, murdering three Israelis—Eliyahu Dahan, Yossi Habi and policeman Salim Barakat—and wounding 31.

Abu Hamid died at Assad Harofe Medical Center in Rishon Lezion after a lengthy battle with lung cancer. Since September, Palestinians have called for his release on medical grounds.

Fatah officials have accused Israel of negligence, despite the care that Abu Hamid received.

The Al-Aqsa Martyrs Brigades has over the past year returned to the headlines.

According to a report from October 2022 by the Meir Amit Intelligence and Terrorism Information Center, the Al-Aqsa Martyrs Brigades (AAMB) “is not officially part of the Fatah movement, although it is generally referred to as ‘Fatah’s military wing,” adding that while the Palestinian Authority’s “security forces sometimes even persecute AAMB operatives because their independent activities emphasize the PA’s weakness and the security vacuum in various regions, especially northern Samaria,” on the other hand, “Fatah’s websites and social media are often used to glorify the AAMB, sometimes hinting they do in fact belong to the movement. That usually happens when Fatah apparently wants to gain public sympathy and support and prove it has not abandoned the ‘resistance,’ especially since Hamas and the PIJ [Palestinian Islamic Jihad] criticize it and snap at its heels.”

The report described the Al-Aqsa Martyrs Brigades today as being “a generic name for the armed squads of Palestinian terrorists currently active in Judea and Samaria.”

It noted that “some AAMB squads are affiliated with Fatah and others are not, and are not committed to Fatah or the PA and its policies, and therefore operate without taking into consideration its official political line and security limitations. In addition, they sometimes criticize Fatah and the PA, act independently and support ‘resistance’ and ‘armed struggle.’ ”

The Al-Aqsa Martyrs Brigades has been designated as a terrorist organization by Israel, the United States, the European Union, Canada, Japan and New Zealand.