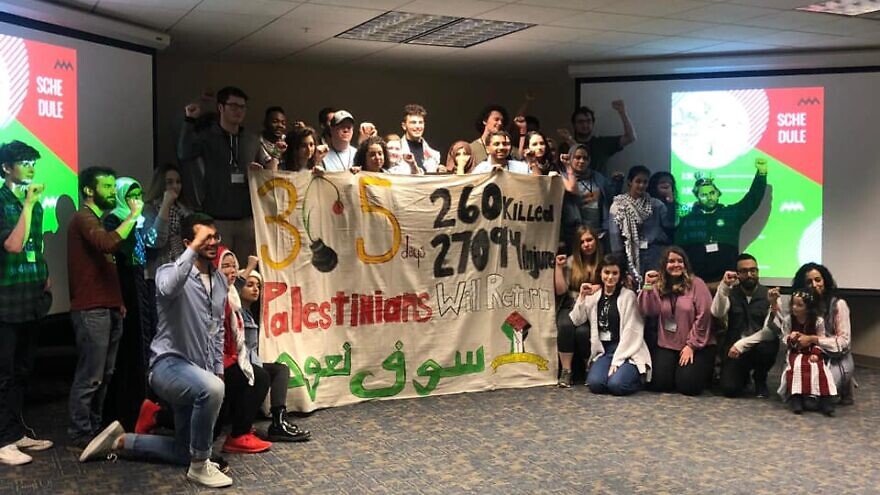 (January 21, 2020 / JNS) Several pro-Israel groups are urging the University of Michigan to cancel an upcoming conference at the school that is featuring anti-Israel groups and speakers that “have a long record of vicious anti-Semitism,” according to Roz Rothstein, co-founder and CEO of StandWithUs.

The event, titled “2020 Youth for Palestine Conference” is slated to take place from Jan. 25-26 on the campus in Ann Arbor, Mich., and is being hosted by Midwest Students for Justice in Palestine, Palestinian Youth Movement and Students Allied for Freedom and Equality.

“The Students Supporting Israel (SSI) movement expects the University of Michigan to condemn and cancel such a hateful conference,” Ilan Sinelnikov, president and founder of the Israeli advocacy organization, told JNS.

He noted that several anti-Israel/anti-Semitic groups are involved in the event, and that, similar to other like-minded groups, have been spreading hateful messages on social media.

“One of the sponsor organizations of the event ‘Anakbayan USA’ wrote in their statement that they are sponsoring the conference to ‘continue struggling in solidarity with the Palestinean [sic] people in order to confront or [sic] shared enemy: US imperialism and its puppet regimes,’ ” he said.

Sinelnikov added that “such a statement exposes the true face of this conference, and voices like these should have no room on our campuses, let alone in our country.” 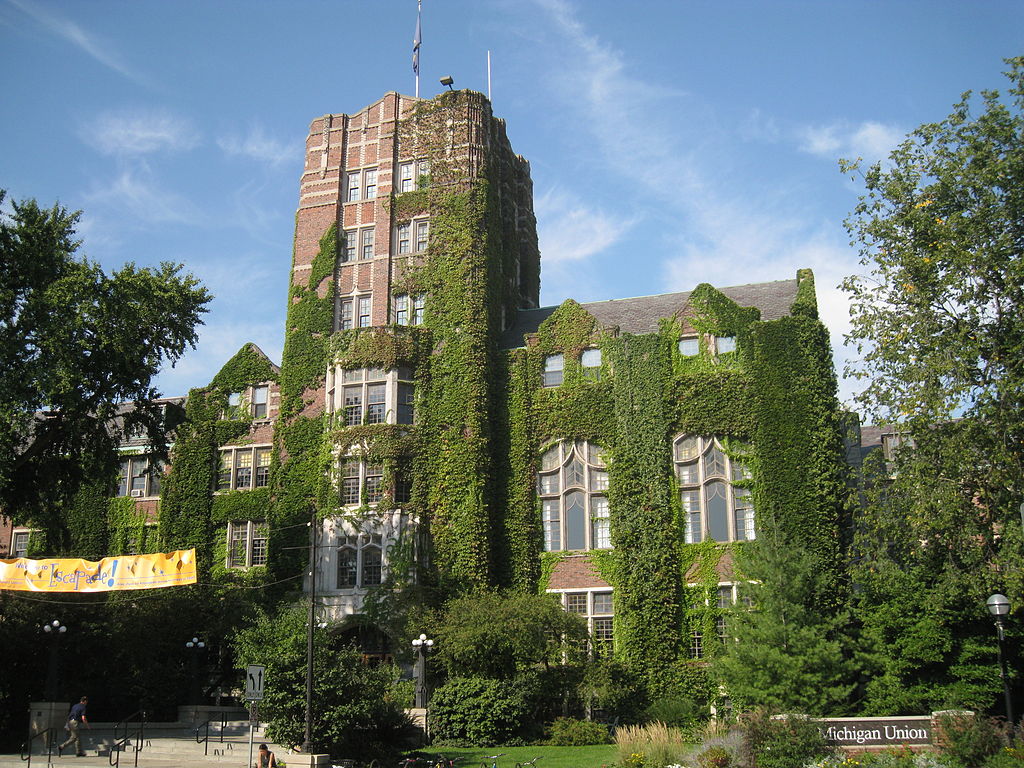 The Michigan Union on the University of Michigan Campus. Credit: Wikimedia Commons.

According to conference organizers, the event comes at a time when Palestinian student groups are “being attacked at every corner” from university administrations and “Zionist groups” to President Donald Trump’s executive order on discrimination of Jewish students. As such, the goals of the conference include “contextualizing the current political climate in the U.S., offering tools to carry your organization through times of hardship and encouraging mobilization on a mass level.”

The conference comes just weeks after the U.S. Department of Education’s Office for Civil Rights launched two investigations into UCLA for its administration’s repeated failure to “prevent a hostile campus environment for its Jewish campus community in direct violation of the school’s Title VI obligations,” which included verbal harassment of a Jewish student, while the second investigation into the school’s decision to allow the National Students for Justice in Palestine conference in November 2018.

The investigations themselves come about a month after Trump’s December 2019 Executive Order that that protects Jews from discrimination under Title VI, enacted as part of the Civil Rights Act of 1964.

‘Could be a violation of Title VI’

Ahead of the event, the Zachor Legal Institute sent a letter to the general counsel of the University of Michigan advising administrators of the Executive Order, in addition to noting the UCLA conference and complaint the organization had filed with the U.S. Department of Education.

“In short, we said that if the same things happen at the upcoming conference as happened at UCLA with SJP, it could be a violation of Title VI, and if that was the case, we’d file a Title VI complaint on behalf of any student(s) who were discriminated against,” Greendorfer told JNS.

In a statement to JNS, Rick Fitzgerald, assistant vice president for public affairs, said the university was aware of the conference being hosted “by a recognized student organization on our campus.”

“With more than 1,300 student groups on the Ann Arbor campus, events organized by students—many open to students from other campuses—happen with some regularity.”

Nevertheless, NSJP, along with several other groups involved in the event, have a long history of promoting support for terrorism and anti-Semitism.

An October 2019 report by the Institute for the Student of Global Antisemitism (ISGAP) revealed how NSJP “leaders and official university chapters espouse blatant forms of anti-Semitism on social media and use the national conferences as a platform to propagate their discriminatory ideas.”

At its most recent national conference, held at the University of Minnesota in November 2019, NSJP promoted terrorist Ahmed Saadat, General-Secretary of the Popular Front for the Liberation of Palestine (PFLP), which has been designated a terrorist organization by the United States.

Additionally, the Palestinian Youth Movement has also shown support for U.S.-designated terror groups and glorified leaders of such groups on social media. At a July 2018 event hosted by the group, it encouraged the kidnapping of Israeli soldiers. Due to these problematic ties, a Toronto church decided to cancel an event with PYM in June 2019.

In particular, Samidoun is a proxy of PFLP, and its coordinator, Khaled Barakat, is a senior PFLP member and head of its foreign-operations department.

‘A worrying example of bigotry’

Roz Rothstein, co-founder and CEO of StandWithUs, told JNS that her organization is “deeply concerned” about the event, and in particular, its keynote speaker, Hatem Bazian, who “has a long record of vicious anti-Semitism.”

Rothstein said that “his organization, which is sponsoring the conference, has denied the Armenian genocide, spread homophobia and expressed support for terrorist groups. The University of Michigan must unequivocally condemn this hate and make clear what steps they will take to ensure a safe educational environment for students on campus.”

Avi Gordon, executive director of Alums for Campus Fairness, told JNS that the conference threatens to create a “discriminatory environment” at Michigan.

He said it is “a worrying example of bigotry taking place and follows incidents last academic year in which two instructors refused to write letters of recommendation for students solely because they decided to study abroad in Israel.”

In November 2018, John Cheney-Lippold, an associate professor in the university’s American culture department, refused to write a letter of recommendation for a student—citing support for BDS—after initially agreeing to do so. The University of Michigan later denounced the professor’s actions and sanctioned him. 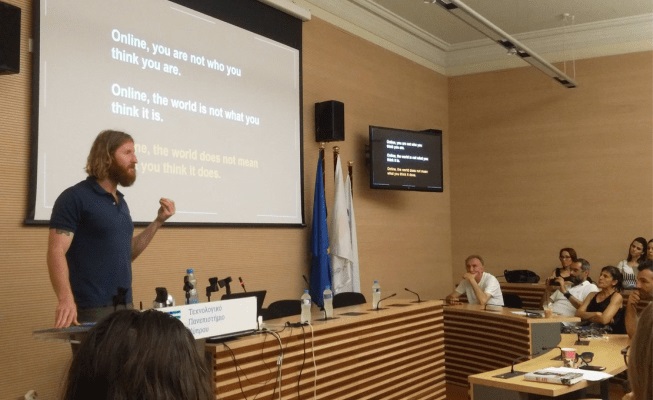 University of Michigan professor John Cheney-Lippold refused to write a letter of recommendation in 2018 for a Jewish student applying for a study-abroad program in Israel. Source: Screenshot.

“The administration must continue to make clear that hate directed against any group, including Jewish students and their allies, will not be tolerated,” said Gordon.

Hali Haber, director of campus programming and strategic relationships with CAMERA, said the campus has become a hostile environment for pro-Israel students.

“For many years, and especially since the University of Michigan’s student government passed a BDS resolution in 2017, Ann Arbor has been a hotbed for anti-Israel activity. Students for Justice in Palestine and their affiliates propagate misinformation, whitewash the threat of terrorism against Israel and advocate for the dissolution of the world’s only Jewish state,” she said.

Tammi Rossman-Benjamin, AMCHA Initiative co-founder and director, told JNS that while SJP has the right to hold its conference there, numerous studies by her group have shown that universities with SJP chapters are more prone to acts of aggression against Jewish and pro-Israel students.

“Every one of our studies has found that schools with SJP chapters are about seven times more likely to have acts of aggression targeting Jewish and pro-Israel students, including assault, harassment, suppression of speech and destruction of property. And the guilty party behind many of these incidents is SJP—both members and the group as a whole,” she said.

“These behaviors time and again deprive Jewish and pro-Israel students of their freedom of speech, assembly and association,” she continued, “and deny them access to a campus safe from harassment.”

As such, Rossman-Benjamin stopped short of calling for the conference to be canceled but warned the school of possible repercussions.

“The University of Michigan should make clear to SJP and all its students that while anti-Zionist speech is protected under the First Amendment, the intolerant behavior such rhetoric often incites will not be tolerated under any circumstances and, if those behaviors occur, serious consequences will result.”