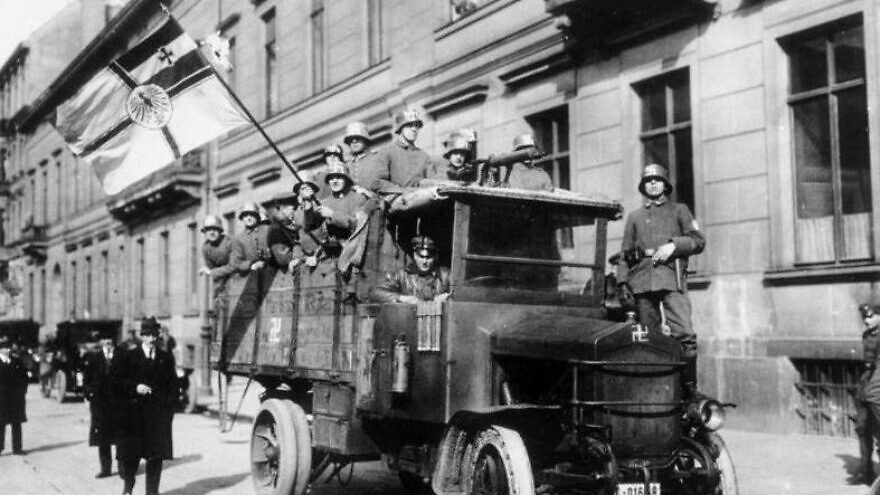 The Marine Brigade Erhardt during the Kapp Putsch in Berlin 1920 (it used the swastika as its symbol, as seen on their helmets and on the truck, which inspired the Nazi Party to adopt it as the movement's symbol). Credit: German Federal Archives via Wikimedia Commons.
Spread the word.
Help JNS grow!
Share now:

(August 3, 2022 / JNS) The publisher of the German weekly current-affairs magazine Stern has commissioned historians to conduct an independent review into the publication and its late founder, who allegedly had ties to Nazi Germany during World War II.

Bertelsmann announced on Monday that it has hired experts from the Leibniz Institute for Contemporary History in Munich to examine “the history” of Stern magazine, as well as Henri Nannen and his role during Germany’s Nazi era.

Nannen, who died in 1996, was Stern’s founder, longtime publisher and editor-in-chief.

The independent review was launched by Bertelsmann’s executive board in cooperation with related parties, including the editors-in-chief of Stern and the Henri Nannen School of Journalism. The research period will cover the years starting from Nannen’s founding of Stern in 1948 until his retirement in 1983. “It will focus on the question of political, personal and content-related entanglements and connections to the National Socialist era,” said Bertelsmann in a statement.

The project is expected to take several years.

A report in May by the public broadcaster NDR revealed that Nannen was a private in the Luftwaffe, Nazi Germany’s air force, and was involved in distributing pro-Nazi and anti-Semitic propaganda during World War II. Other details about his link to Nazi forces were revealed in a documentary published on the YouTube channel “Strg_F.”

Earlier this year, the journalism award the Nannen Prize was renamed the Stern Prize. The renaming of the Henri Nannen Journalism School and the removal of Nannen’s name from Stern’s masthead are also being considered, according to the German broadcaster Deutsche Welle.