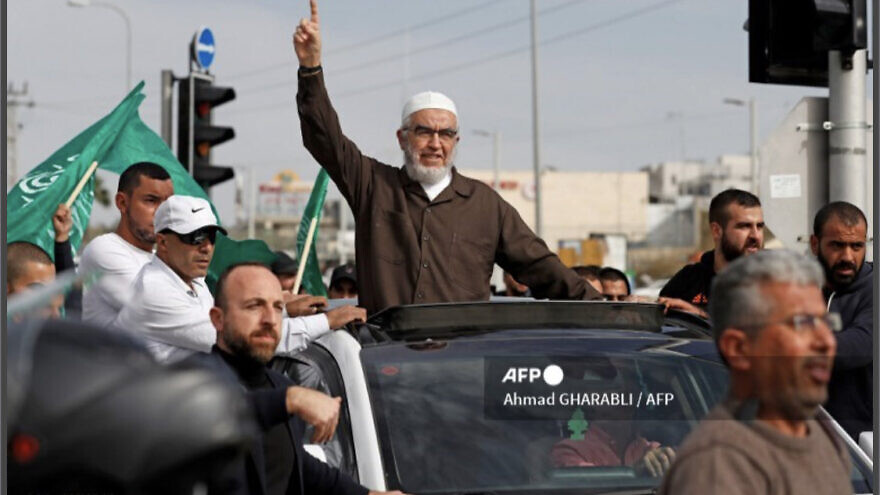 Raed Salah, the head of the northern branch of the Islamic Movement in Israel, was released from Megiddo prison after serving 17 months, Dec. 13, 2021. Source: Twitter.
Spread the word.
Help JNS grow!
Share now:

(December 13, 2021 / JNS) Raed Salah, head of the northern branch of the Islamic Movement in Israel, was released on Monday from Megiddo Prison in Israel after serving time for incitement to terrorism.

He was greeted with fireworks and a crowd of around 1,000 supporters chanting, “Raed, the sheikh of Al-Aqsa!” upon his return to his home city of Umm al-Fahm near Haifa, reported Ynet.

He served 17 months of a 28-month sentence, though it was not his first time in jail.

Opposition leader Benjamin Netanyahu tweeted a news report stating that senior members of the southern branch of the Islamic Movement’s political party, the United Arab List (or Ra’am in Hebrew), which serves in the current coalition government, blessed the release of the radical cleric. “The [Naftali] Bennett government and the Islamic movement are breaking another record of shame,” he wrote on Twitter.

The Islamic Movement in Israel was founded in 1971; its northern branch has been outlawed by the Israeli authorities since 2015.