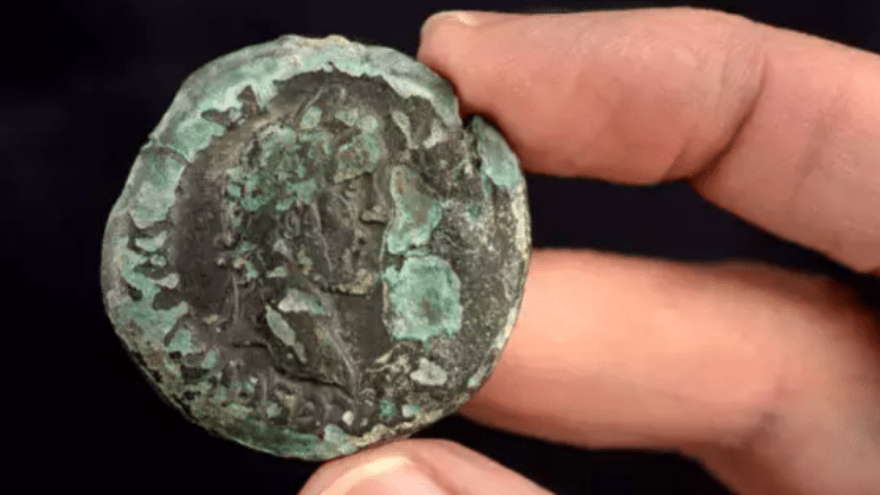 (July 26, 2022 / JNS) A rare 1,850-year-old bronze coin bearing the image of Roman moon goddess Luna and the Cancer zodiac sign has been recovered from the seabed off the Carmel coast in northern Israel, the Israel Antiquities Authority (IAA) reported on Monday.

In Roman mythology, Luna represents the moon, and is the female counterpart of her brother, Sol, the personification of the sun. Luna wears a crescent, symbolizing the new moon, as a crown and rides a chariot.

IAA numismatics expert Lior Sandberg found the coin, the first of its type discovered in Israel, during a maritime survey designed to protect antiquities from accelerated coastal development.

The coin was minted in Alexandria, Egypt, by the Emperor Antoninus Pius (138–161 C.E.) as part of a series of 13 coins, 12 of which depicted the 12 signs of the zodiac and another imprinted with the entire zodiac wheel. One side of this particular coin is dated “Year Eight,” a reference to the eighth year of Antoninus Pius’ rule, 144/145 C.E., and the reverse side depicts the Cancer sign underneath the goddess figure.

IAA general director Eli Eskosido said, “In the last decade, Israel has changed its perception of the sea. Rather than simply defining the country’s border, the sea is now recognized as an integral part of our cultural heritage.

“In addition to security, strategic and economic concerns, Israel’s territorial waters contain natural resources and cultural assets that must be explored and protected in the light of diverse development interests. The maritime survey around Haifa is part of this process, and the rare coin recovered is a vivid reminder of its cultural importance,” Eskosido said.