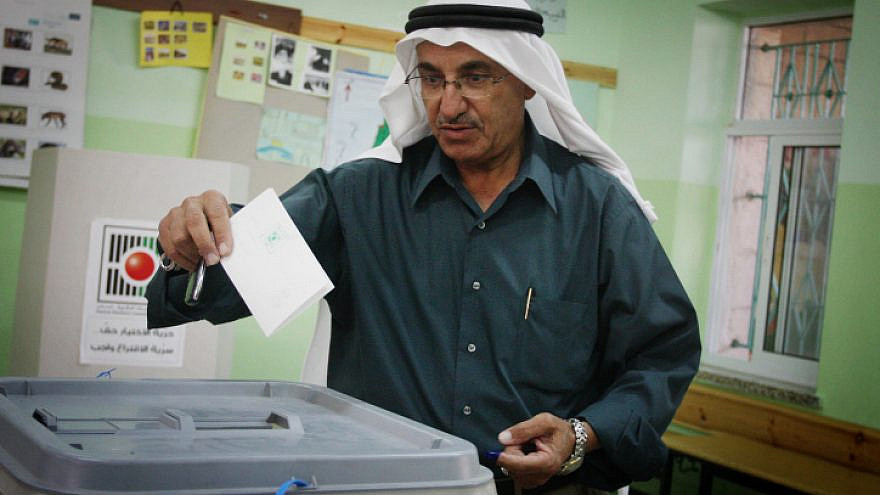 A Palestinian casts his vote in the municipal elections in the West Bank town of Al-Bireh on Oct. 20, 2012. Photo by Issam Rimawi/Flash90.
Spread the word.
Help JNS grow!
Share now:

According to the report, the aim of such talks—that would include the Middle East Quartet, made up of the United States, the United Nations, the European Union and Russia—is to extricate the P.A. both from its economic crisis and from the isolation that it suffered under the administration of former U.S. President Donald Trump.

Citing reports in the Arab and Palestinian press, MEMRI states that the Biden administration recently demanded that the P.A. clarify whether, after its elections, there will be a government in Ramallah that recognizes Israel, puts an end to violence and honors past agreements. In response, according to those reports, the P.A. sent the Biden administration and the Quartet a letter claiming that all factions, including Hamas, are committed to “a Palestinian state in the 1967 borders.”

Hamas officials, however, have made statements contradicting that assertion, saying that the organization does not intend to cease armed resistance or to relinquish any territory from the Jordan River to the Mediterranean Sea.

One example of such a statement, according to MEMRI, was made by Hamas political bureau head Ismail Haniyeh during a Feb. 20 Zoom conference on the fight against normalization with Israel.

“Hamas is continuing with its resistance plan to end the occupation and liberate the Palestinian land from the sea to the river [while] rejecting any [political] arrangement that will take away from the rights of our people on its land and its homeland or will impinge on the right of return,” he said.