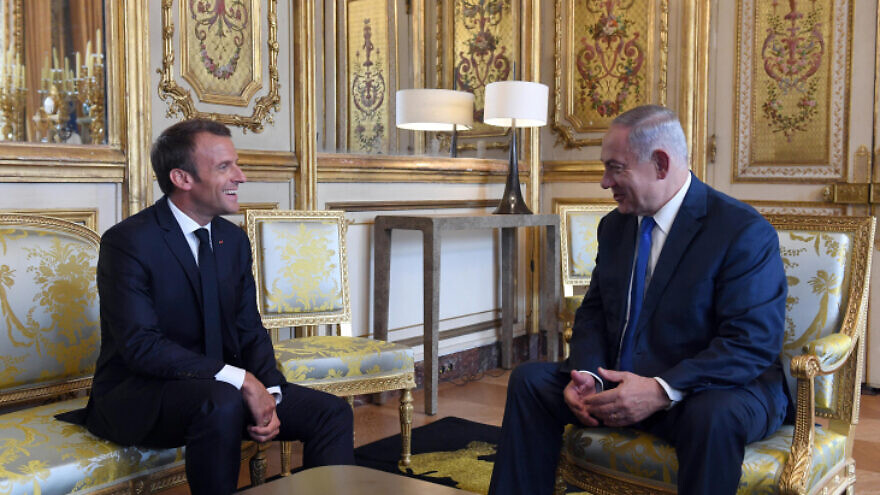 (May 27, 2020 / Israel Hayom) Leaders of major European countries have been urging Israeli Prime Minister Benjamin Netanyahu to shelve his plan to apply sovereignty to large parts of Judea and Samaria and the Jordan Valley, Channel 13 News reported on Tuesday.

Netanyahu said he plans to present the move, endorsed by the United States as part of U.S. President Donald Trump’s “Peace to Prosperity” plan for the Middle East, as early as July 1.

According to the report, the European leaders urged Netanyahu to act on the Palestinian issue only in accordance with international law.

“In a friendly spirit, I ask that your new government not take unilateral steps. Such a move will undermine stability in the Middle East,” French President Emmanuel Macron reportedly wrote to Netanyahu.

British Prime Minister Boris Johnson echoed the sentiment in a letter of his own, but according to the report it is unclear whether German Chancellor Angela Merkel did so as well.

Spanish Prime Minister Pedro Sanchez pleaded with his Israeli counterpart to respect international law and to revive the Israeli-Palestinian peace process, stalled since 2014.

“The two-state solution must be achieved in accordance with U.N. resolutions,” Sanchez wrote in a letter, a copy of which was also sent to Israeli Defense Minister Benny Gantz.

“Negotiations with the Palestinians must be renewed and a two-state solution must be achieved on the basis of international law,” Italian Premier Giuseppe Conte wrote to Netanyahu. He, too, sent a copy of the letter to Gantz.

E.U. foreign policy chief Josep Borrell has warned that should Israel pursue annexation despite the international community’s objections, the 27-member bloc may sanction it.

“The European Union reiterates that any annexation would constitute a serious violation of international law. The European Union will continue to closely monitor the situation and its broader implications, and will act accordingly,” he said in a statement last week.

In an interview with Israel Hayom, Luxembourg’s Foreign Minister Jean Asselborn warned against applying Israeli law in parts of Judea and Samaria, saying, “We are working vigorously to prevent the annexation of occupied Palestinian territories.”