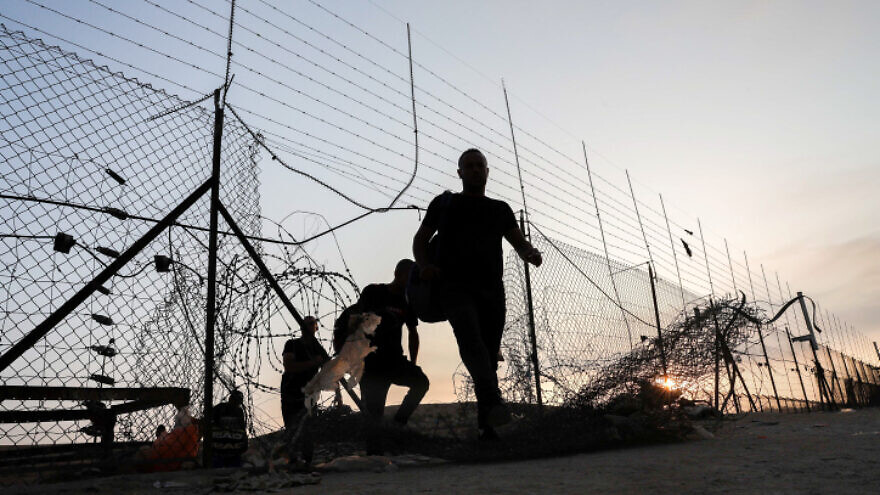 Palestinian workers cross into to Israel through a hole in the security fence near Hebron, July 25, 2021. Photo by Wisam Hashlamoun/Flash90.
Spread the word.
Help JNS grow!
Share now:

(January 12, 2022 / Israel Hayom) Palestinian tourist companies in Ramallah are taking advantage of a gap in the border fence to organize hundreds of tours to Israel for Palestinians.

What began as visits to Israeli beaches has expanded into tours to popular tourist destinations, with massive advertising campaigns on social media and companies openly announcing that trips are taking place due to a breach in the border fence in the Modi’in Illit or Samaria area.

An Israel Hayom investigation revealed that “tourists” are brought to the fence in a Palestinian bus, cross the breach on foot and get on an Israeli bus waiting for them on the other side. In other instances, an Israeli bus picks them up at a pre-agreed-upon destination, drops them off at the gap, crosses a checkpoint legally and picks the visitors up again on the other side.

“It is disturbing to see how the defense establishment turns a blind eye to security matters and allows thousands of Palestinians to enter Israel through breaches in the fence,” Matan Peleg, CEO of right-wing NGO Im Tirtzu, said.

“Demographically it is also a disaster, as there is no one to check who enters and who leaves. The security implications are disastrous. The travelers sing intifada songs and raise their children as part of nationalist Palestinian heritage. The [Israeli] defense establishment must stop the celebration of the nakba trips which explicitly call for the destruction of Israel from within.”

The so-called “nakba,” or catastrophe, refers to the exodus of Palestinian refugees from Israel in 1948.

The Israel Defense Forces Spokesperson’s Unit said in a statement, “IDF and Border Police officers are deployed in the area in accordance with the assessment of the situation and use various means and advanced capabilities against anyone who is identified as a danger, a terrorist, or causing damage to the security fence.”

The IDF said that in the past year, Border Police officers stopped hundreds of groups and confiscated about 120 buses carrying illegal visitors to Israel.

“More than 100 indictments have also been filed against bus drivers and tour organizers. In addition, the drivers and the organizers of the transportation are fined heavily and some are detained until the end of the proceedings,” it said.