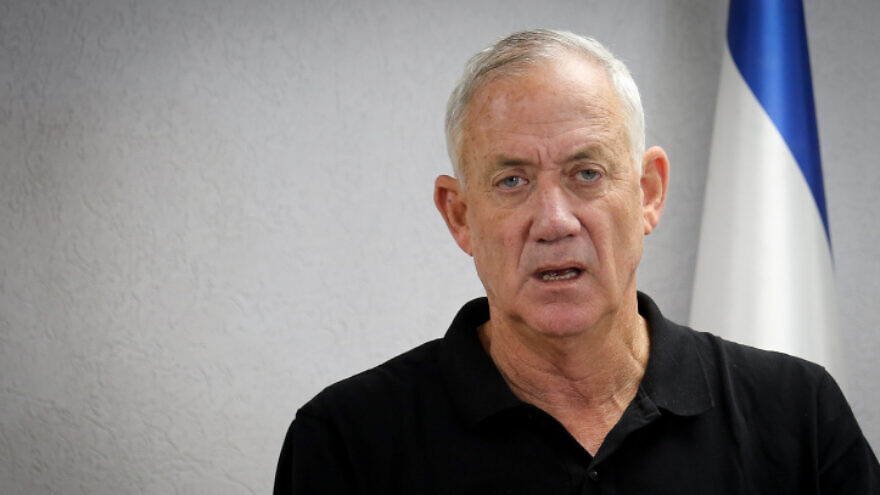 (August 28, 2022 / JNS) Israel’s defense minister warned on Saturday that the progress Iran has made with its nuclear program means that certain aspects of the nuclear agreement currently under discussion, specifically the so-called sunset clauses, are “problematic.”

During a briefing for think-tank directors in Washington, Benny Gantz said, “Iran has gained knowledge, infrastructure and capabilities—much of which is irreversible. This will enable Iran to further expand its nuclear program during the period of an agreement that would have fewer restrictions. Iran would be able to acquire a nuclear weapon when said agreement ended in 2031,” said Gantz.

In recent years, Iran has produced thousands of advanced centrifuges, he noted. If, in accordance with the draft agreement, these centrifuges are stored and not destroyed, they will be immediately available to enrich uranium once the accord expires, or if Iran withdraws from it, he said.

Gantz noted in particular the new advanced centrifuge cascade at Iran’s Fordow nuclear facility, where he said Iran could rapidly enrich uranium to the 90 percent (military-grade) whenever it chooses.

With its current capabilities, should Iran decide to do so, it could reach 1 SQ (“significant quantity,” defined as 25 kg of U-235, roughly the amount of high-enriched uranium required to produce a bomb) within a matter of weeks.

Iran’s nuclear progress had to be rolled back and the country deterred from advancing further with its nuclear program, said Gantz.

“As such, improvements are necessary in the nuclear agreement in discussion—with an emphasis on the ‘sunset’ clause.”

Saturday’s briefing came a day after the Israeli defense minister visited U.S. Central Command (CENTCOM) HQ in Tampa, Florida, and met with U.S. National Security Advisor Jake Sullivan, with whom he discussed the nuclear deal and the need to increase defense cooperation among Israel, the United States and Arab countries.

The defense minister reiterated to Sullivan that Israel is opposed to the proposed nuclear agreement, and stressed steps he said are crucial to preventing Iran from acquiring nuclear weapons, according to a statement from the Defense Ministry. The dialogue between the Israeli leadership and the United States has been conducted in “a precise and responsible manner,” the statement said.

During Saturday’s briefing, Gantz welcomed U.S. initiatives to strengthen cooperation in the Middle East and American military activities against Iranian proxies in the region, but emphasized that Israel would continue to act on its own in this regard.

“Iran provides over a billion dollars to its proxies in Syria, Iraq, Lebanon, Yemen and Gaza. Hezbollah, which harms Lebanon and threatens Israel, receives over half a billion dollars per year,” he said.  Iran also provides more that $100 million annually to Hamas and the Palestinian Islamic Jihad in Gaza, he added.

“As such, regardless of any future scenarios, action must be taken against Iranian proxies, which threaten the entire Middle East region,” he said.

On Sunday morning Israel time, Gantz was scheduled to travel to Japan.