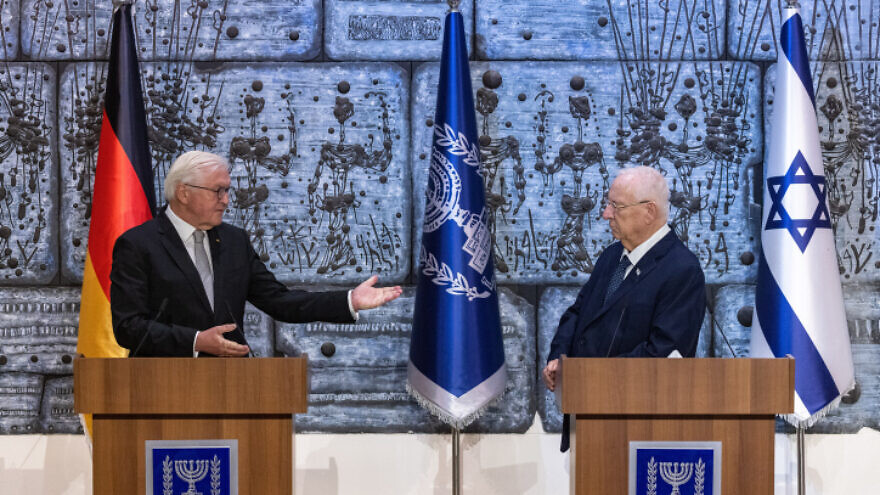 (July 1, 2021 / JNS) Israeli President Reuven Rivlin hosted an official reception ceremony in Jerusalem on Wednesday for German President Frank-Walter Steinmeier, who is in the country for a three-day state visit.

After reviewing an Israel Defense Forces honor guard, the two leaders gave joint statements to the press and planted an apple tree in the Avenue of the Presidents in the gardens of the President’s Residence, before holding diplomatic consultations, according to an official statement.

Steinmeier will be the last head of state hosted by Rivlin, who is expected to end his seven-year tenure as president on July 9.

“There is something symbolic in the fact that the last head of state I host here in Jerusalem, as president, is you, my friend, President Steinmeier,” said Rivlin.

“I, who demonstrated here—just across the road—at the President’s Residence, against the establishment of diplomatic relations between Israel and Germany, have had the honor of taking an extraordinary journey with you between the worst and most painful points of the history our two peoples share,” he added.

“Germany under your leadership, and under the leadership of the chancellor, has been a strong partner in the uncompromising fight against anti-Semitism and has stood firm with us in our just campaign against terrorist forces that seek to wipe us off the map,” said Rivlin.

Rivlin also thanked the German leader for his efforts to secure the return of Israeli soldiers and civilians being held captive by Hamas in the Gaza Strip.

Steinmeier thanked Rivlin, saying it had been “a great honor” to share the journey.

Looking ahead to his scheduled meetings with members of Israel’s new government, the German president said that what was needed now was to “build confidence” between the government and the Palestinian Authority. This, he said, could be accomplished via “small steps.”

“In the Israeli-Palestinian conflict, we have seen missile attacks on Israel in recent months, and that is something we will never accept. Israel has the right to live in security,” said Steinmeier.  However, he added, “The future cannot happen without a two-state solution.”

Turning to Iran, Steinmeier agreed that both countries shared the goal of preventing the Islamic Republic from obtaining nuclear weapons, while noting that “we do not always agree on the way to do that, through a return to an agreement or by a different route.”