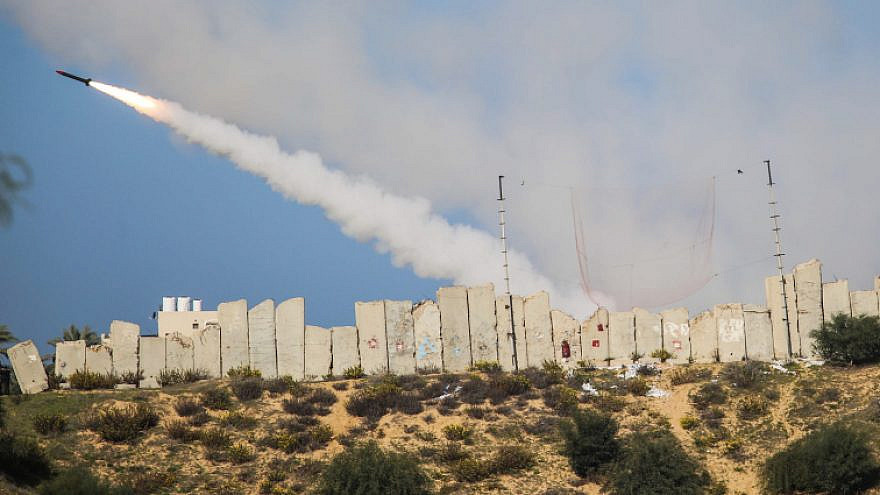 Illustrative: A rocket is fired into the Mediterranean Sea during a drill of Palestinian armed groups simulating a war against Israel, south of Gaza City, on Dec. 29, 2020. Photo by Ali Ahmed/Flash90.
Spread the word.
Help JNS grow!
Share now:

(April 15, 2021 / JNS) Terrorists in the Gaza Strip fired at a rocket at southern Israel on Thursday evening, triggering warning sirens at the end of Yom Ha’azmaut, Israel’s Independence Day.

A statement by the Israel Defense Forces said alerts went off in the city of Sderot and the surrounding area. The IDF confirmed a few minutes later that a rocket had been launched. The projectile landed in an open area and did not cause damages or injuries.

There were no details immediately available on the identity of the armed faction behind the attack.

On March 23, during Israel’s last national elections, a Gazan terror faction fired a rocket at Beersheva, soon after Israeli Prime Minister Benjamin Netanyahu had campaigned in the southern Negev city. That rocket set off localized warnings nearby the city. There were no reports of damage or injuries.

Defense officials estimated that the Iranian-backed Palestinian Islamic Jihad was responsible for the election day attack, according to Israel Hayom.

Hours afterwards, the Israel Air Force bombed a rocket-production site and a military post belonging to Hamas in Gaza. It released a statement holding Hamas responsible for “all events transpiring in the Gaza Strip,” adding that Hamas “will bear the consequences of terror activity against Israeli civilians.”

The attack was the sole incident of projectile fire from Gaza in March, while no rockets were fired in February, according to data from the Shin Bet domestic intelligence agency.