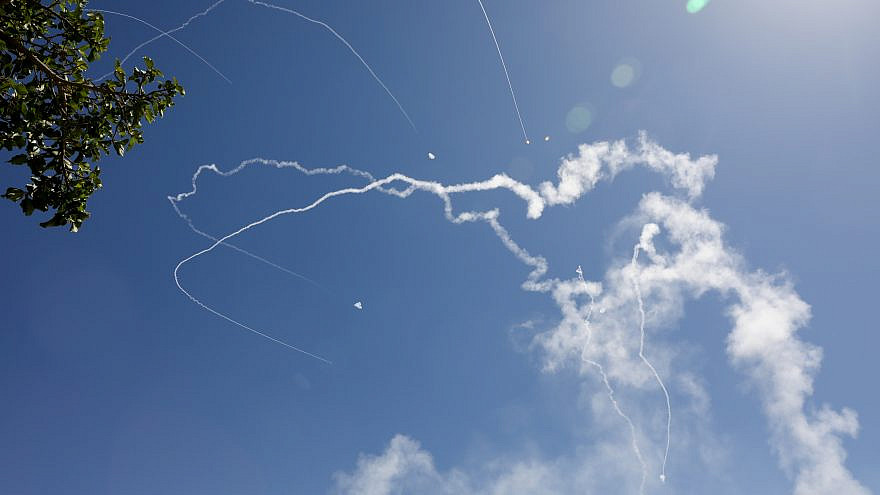 The Iron Dome air-defense system fires interception missiles as rockets continued to be launched from the Gaza Strip towards the southern Israeli city of Ashkelon, May 19, 2021. Photo by Olivier Fitoussi/Flash90.
Spread the word.
Help JNS grow!
Share now:

Sirens sounded in the Lower Galilee and Krayot region in the north before the Iron Dome air-defense system intercepted one rocket from Lebanon and three more fell in open areas, the IDF said in a statement. There were no reported injuries.

In retaliation, IDF artillery guns struck a number of targets in Lebanon.

Also on Wednesday, the southern cities of Ashdod, Ashkelon and Netivot came under rocket fire. Before that, Rehovot and the surrounding area were targeted by rockets.

There were no reported injuries, although a rocket exploded on the Route 4 highway near Ashdod.

Beersheva came under multiple rocket attacks as well on Wednesday, causing shrapnel to fall in the city.

The target was struck by Israeli fighter jets, the IDF stated.

“The hideout apartment was used by the terror operatives for offensive cyber activity against Israeli targets. These actions are clear proof of Hamas terror activity in the cyber domain. The apartment was located adjacent to a kindergarten, proving once again that the Hamas terror organization deliberately endangers civilians by placing its military infrastructure in the heart of densely populated civilian area,” it added.