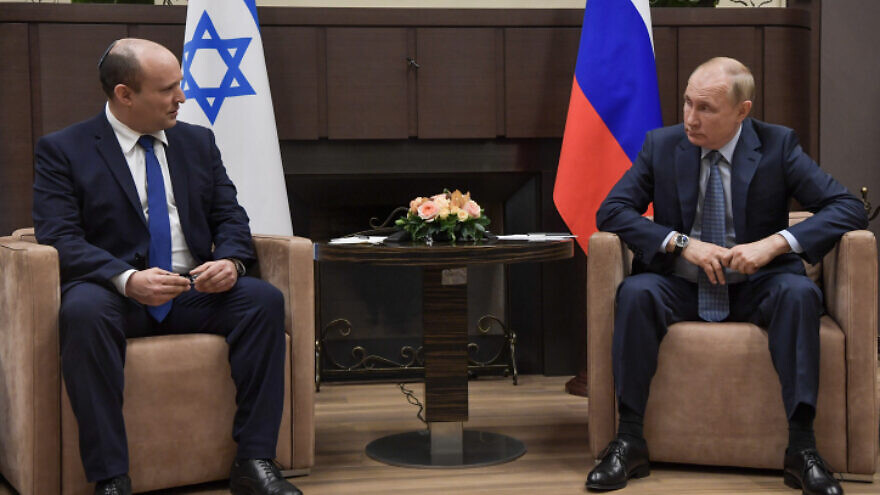 (March 7, 2022 / JNS) Israel could expect to see the arrival of a total of 15,000 Ukrainians by the end of the month if it continues to allow entry to refugees fleeing their war-torn country at the current pace, Interior Minister Ayelet Shaked told the Cabinet during its weekly Sunday meeting.

“Since the outbreak of the war, 2,034 Ukrainian nationals have entered Israel,” she said. “We are on an upward trend.”

Former Israeli Ambassador to the United Nations Danny Danon told JNS that Israel is “intent on exhausting every possible option in the hope of helping the Ukrainian people.”

He said that Israel “takes pride” in being a homeland for the Jewish people.

“We continue to welcome every Jew who wishes to come to Israel, whether they are from Ukraine or Russia,” he added. “Most of all, we are praying for the well-being of the Ukrainian people and an end to this conflict as soon as possible.”

Eight years after Ukraine’s Maidan revolution, which successfully pushed back against Russia’s attempt to prevent it from signing a free-trade agreement with the European Union, Russian President Vladimir Putin has managed to maintain a sustained attack on Ukraine without any real consequence on the ground.

On Sunday, Ukraine’s President Volodymyr Zelensky slammed world leaders for their silence after Russian forces appeared to massacre a group of civilians in the town of Irpin, near Kyiv.

Ukraine received a signed commitment in 1994 under the Budapest Memorandum on Security Assurances to ensure its security. But it increasingly appears that the United States and European allies seem unwilling to stop Putin’s aggression. Western leaders appear paralyzed either by the indecision to save Ukraine or have doubled down on a decision to abandon the country altogether.

Meanwhile, Israeli Prime Minister Naftali Bennett is shuttling between the two sides in an effort to resolve the crisis and prevent a humanitarian disaster.

Bennett met for several hours on Saturday evening with Putin, and on Sunday morning, he spoke with Ukrainian President Volodymyr Zelensky three times in 24 hours, according to Bennett’s office.

Israel has also sent 100 tons of medical equipment, winter gear and other emergency supplies to Ukraine so far, and announced plans to set up a field hospital this week in Ukraine.

Furthermore, The Focus Project—​​a joint initiative of a broad coalition of U.S. Jewish community organizations—noted that Israel today “faces a dilemma, between the moral imperative to take a stand against the Russian invasion of Ukraine, while maintaining its national security interests.”

“With Russia virtually controlling the Syrian border,” it said in an emailed statement, “it has allowed Israel to act against Iranian armaments in the area without retribution—a stance that could prove catastrophic if denied at any time. This unique situation has led to a delicate balancing act for the Israeli government.”

‘The West is looking to limit the potential for direct conflict’

Yonatan Freeman, an international-relations expert at the Hebrew University of Jerusalem, told JNS that the war has implications for Israel-Russia relations because it “may impact the ability of Israel to operate from the air in Syria.”

“The more this battle continues—and the need for actions and not just words will be expected by the United States vis-à-vis Israel—Jerusalem may be inclined to join a number of moves against Russia, including sanctions, welcoming Ukrainian refugees or even government officials into Israel, or weakening diplomatic relations in some way,” he said. “This may cause Russia to challenge Israel’s ability to militarily fight from the air in Syria.”

If this happens, Freeman warned, “we may soon see an increase in military action by Israel in Syria, perhaps due to a fear such actions will be limited by Russia.”

In addition, he said, “this may impact economic links.”

Freeman pointed out that Israel receives some oil from Russia, as well as a large portion of wheat, which “may lead to higher prices on those fronts as well.”

“One needs to recall that there are over a million people in Israel with former or current links to family in Russia as well, and this can also play a role,” he added. “For instance, it may be harder for people to visit Russia from Israel and the opposite.”

Freeman noted that Israel is “watching not just the U.S. response to events in Ukraine but also recalls the events in Afghanistan.”

“The more the U.S. is seen as unable or unwilling to act under such circumstances, the more will be said in Israel about whether Jerusalem can depend on Washington’s strength and credibility in the future,” he said. “More will be said here about the need for Israel to continue to depend on itself and not on any country or organization.”

Freeman also said that Israel will have to “keep an eye on how these events will impact relations between China and Taiwan, and China and the U.S., as any deterioration will surely impact Israel-Chinese relations.”

He added that the current conflict “may embolden Iran and strengthen its position” as well since Iran sees that “the West is looking to limit the potential for direct conflict.”

“It may lead to Iran also being emboldened to get a nuclear weapon for insurance,” he said. “It recalls what happened to the regime of [Moammar] Gadhafi in Libya, who gave up his program, and also sees Ukraine as a country that in the past gave up its nuclear program as well.”

The war in Ukraine “may give the Iranian leadership more reason to continue with its nuclear ambitions and terrorist attacks against the West and Israel, even if they sign some sort of agreement,” he added.

According to Freeman, Western inaction over the Russian attack on Ukraine further demonstrates to Israel’s government that it cannot rely on other nations to protect it from the Iranian nuclear threat and “a move against Iran, if it feels is necessary, will be led by Jerusalem and/or a coalition it will lead.”