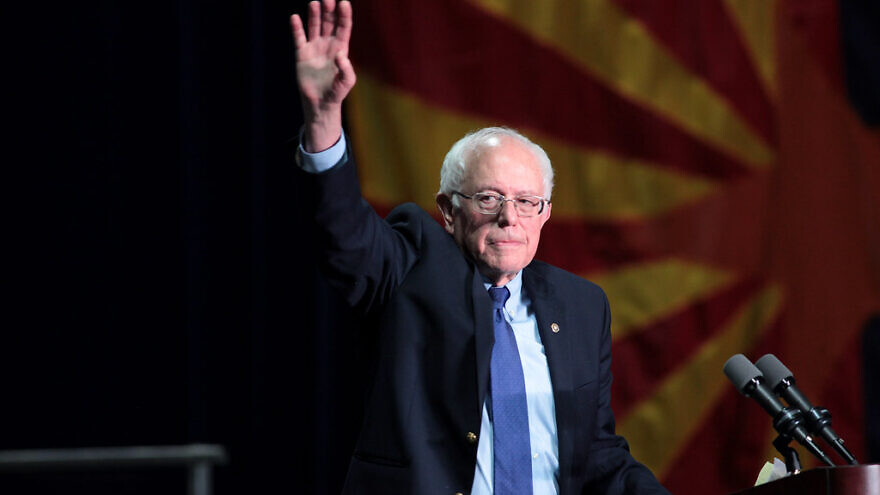 (March 10, 2020 / JNS) The Democratic presidential campaign of Sen. Bernie Sanders (I-Vt.) has named Phillip Agnew, who has called Zionism “racist,” and co-founded a group that supports the anti-Israel BDS movement and a U.S.-designated terrorist group, a senior adviser.

“I am excited to welcome Phillip to our team,” said Sanders in a statement on Saturday. “He is a gifted organizer and one of his generation’s most critical voices on issues of race and inequity. He has and will continue to push me and this movement to deliver on what is owed to black people who have yet to experience reciprocity in this country.”

Agnew, who now goes by the name Umi Selah, previously served as a surrogate for the campaign. He is a co-founder of Dream Defenders, which has ties to Ahmad Abuznaid, a supporter of the U.S.-designated terrorist group the Popular Front for the Liberation of Palestine (PFLP).

Founded in 2012, Dream Defenders exemplifies the trend of black anti-Semitism in the United States.

The organization has labeled Israel as a “continued settler colonial project” whose treatment of the Palestinians is similar to an “apartheid” nation. Without acknowledging Hamas launching rockets from schools and other civilian centers from Gaza into Israel, while using women and children as human shields, Dream Defenders has accused Israel of developing “its latest military weaponry by attacking the civilian population of Gaza.”

Agnew has participated in multiple trips to the disputed territories over the past few years, led by Abuznaid, who claimed that these delegations are to “build real relationships with those on the ground leading the fight for liberation.”

During a January 2015 trip, Dream Defenders met with Omar Barghouti, founder of the BDS movement, and Diana Buttu, who served in the Palestine Liberation Organization during the Second Intifada in the early 2000s, when the PLO perpetrated attacks against Israelis on buses, and in restaurants and other public places. The delegation also met with artist Ayed Arafah in the Dheisheh Refugee Camp, which is recognized as a PFLP camp.

In a 2015 article in Ebony, Agnew wrote, “There is no direct line from Zionism to the Black Freedom struggle. No rhetorical imagination-acrobatics can conjure one, and no amount of intimidation can chart one. It is a racist, exploitative, and exclusionary ideology.”

Although Agnew apologized on Sunday for tweeting in 2009 what he called “stupid comments” about former first lady Michelle Obama, though he did not address his anti-Israel past.

Agnew is part of what critics have said is a group of Sanders surrogates who use anti-Semitic and anti-Israel rhetoric, including Reps. Ilhan Omar (D-Minn.) and Rashida Tlaib (D-Mich.), former Women’s March leader Linda Sarsour, and comedian and University of Detroit Mercy School of Law Professor Amer Zahr.

The Zionist Organization of America has called for Sanders to fire Agnew.

The Republican Jewish Coalition stated that Agnew’s new role exemplifies a trend in the Sanders campaign and that the senator’s main rival, while he may not need them to get the Democratic presidential nomination, will need supporters like Agnew in order to defeat the incumbent president.

“Every step of the way, Bernie Sanders has embraced anti-Israel, anti-Semitic surrogates because that is the support he needs to win the Democrats’ left wing base,” RJC spokesperson Neil Strauss told JNS. “Joe Biden might not need these supporters to win the nomination, but Sanders is proving that Biden will need this racist crowd’s support in order to drive the vote up in his base if he wants any shot at beating the most pro-Israel president in history, Donald Trump.”

B’nai B’rith International CEO Daniel Mariaschin said “it is unacceptable that Phillip Agnew, with his long history of anti-Semitic and pro-terrorism statements, should be given a role within any presidential campaign.”

“In his statement naming Agnew as an adviser, Sanders called Agnew an expert on race and inequity,” he continued. “It is possible to address social inequity in this country without espousing anti-Israel vitriol. We’ve called on the campaign to terminate its relationship with Agnew.”

“Sadly, Senator Sanders has a bad, but very steady habit of giving senior positions in his campaign to people with long records of expressing anti-Israel and even anti-Semitic views,” Democratic Majority for Israel president and CEO Mark Mellman told JNS.

Similar to British Labour Party leader Jeremy Corbyn, he added, “I think he is going to find out that it’s not only immoral, but it’s also bad politics.”