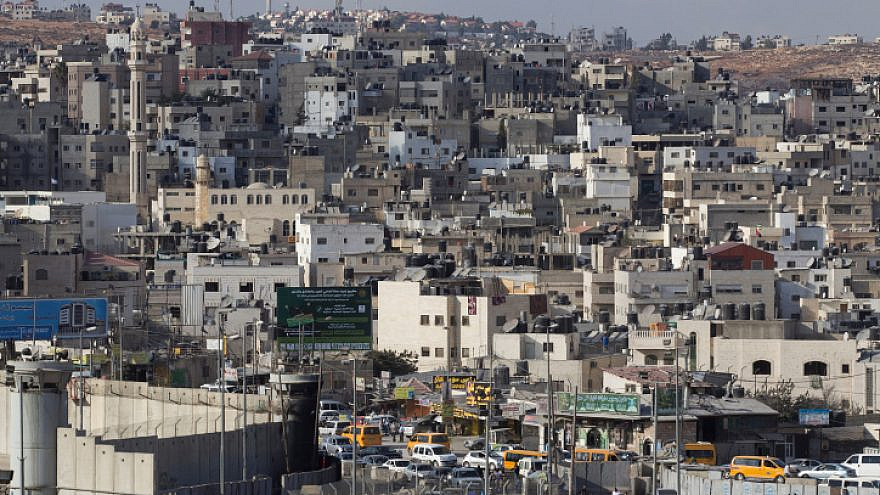 View of the separation wall and checkpoint in the West Bank city of Kalandia, near Ramallah. Sept. 29, 2014. Photo by Miriam Alster/Flash90.
Spread the word.
Help JNS grow!
Share now:

(June 21, 2022 / JNS) In an article published on Al-Arabiya, Saudi political analyst Ali Al-Shihabi said the Palestinian issue could only be resolved by Palestinians reconciling themselves to reality and accepting Israel’s existence.

According to a report by the Middle East Media Research Institute (MEMRI), Shihabi stated that the Palestinians must realize that what they need is not to regain their ancestral land, but to have a globally respected citizenship that will allow them to thrive in the modern world.

The article was published on June 7.

Shihabi said the simplest way to carry this out would be to have them become citizens in an expanded Jordanian-Palestinian state that would include the West Bank and Gaza. The Saudi analyst added that the so-called right of return is unrealistic and that Arab states use it to avoid naturalizing Palestinians in their countries.

“The lack of imagination, so common among leaders throughout history—with imagination being so necessary to solve this problem—combined with a Palestinian people drowning in a sea of illusions and an Israel drunk on its own power can only end in a disaster for a region that is already at the precipice,” he said.