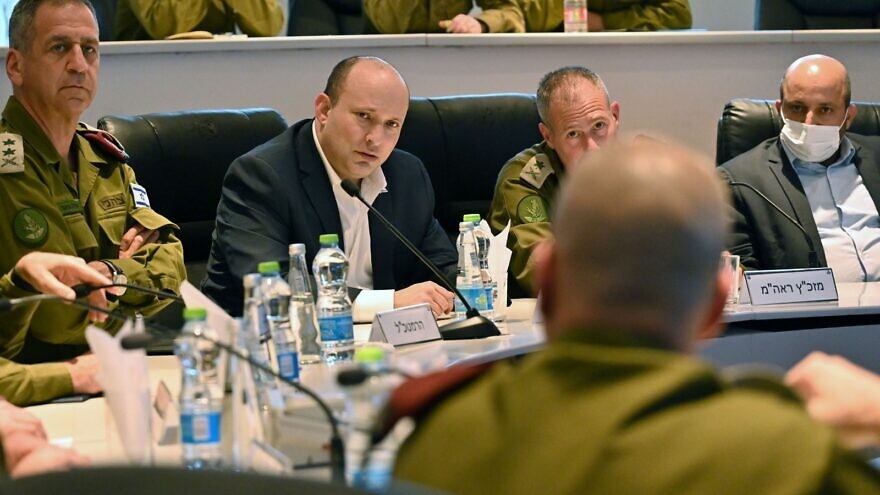 (June 14, 2022 / JNS) Following the mysterious deaths of two scientists, an Iranian official pointed the finger at Israel, reports the New York Times in a piece about the ongoing “shadow war” between the two countries.

Ayoob Entezari, an aeronautical engineer who worked on Iran’s missile and airplane turbine projects, died on May 31. Kamran Aghamolaei, a geologist, who reportedly worked at the Natanz Nuclear facility, died on June 2. Though Entezari and Aghamolaei died in hospitals 400 miles apart, they reportedly suffered similar symptoms.

“It is quite likely that their deaths was no accident. It does add up with previous [Israeli operations]. It does show wider capabilities that include inside work,” Menahem Merhavy, associate fellow at the Harry S. Truman Research Institute for The Advancement of Peace at the Hebrew University in Jerusalem, told JNS.

Meanwhile, Iran’s semi-official Tasnim News Agency on Monday reported that two members of the Islamic Revolutionary Guard Corps (IRGC) Aerospace Force were “martyred” in accidents over the weekend. However, Iran International, a London-based anti-regime Persian news site, citing an “informed source,” reported that the deaths were not the result of accidents. The outlet reported that the IRGC members were involved in weapons development for the Lebanon-based Hezbollah terror group.

IDF Brig. Gen. (res.) Yossi Kuperwasser, a fellow with the Jerusalem Center for Public Affairs (JCPA), cautioned that “nobody really knows” whether Israel is behind any of these incidents. Iran has not directly blamed Israel, he noted, adding, “I’m sure the Israelis are not going to brief the New York Times about it.

“What’s important here.” Kuperwasser continued, “is the impression that people who are involved in the kinds of things that may harm Israel—whether supporting Hezbollah’s precision missile project, promoting terror attacks against Israelis abroad, or aiding Iran’s nuclear program—they get hurt. That’s the common denominator of everything that’s happening,” he told JNS.

“What Israel did take responsibility for, and I think this may contribute to the impression [that it is behind recent attacks], was that during the Guardian of the Walls operation [against terrorist groups in Gaza in May 2021], Israel attacked a group of Palestinian engineers who were responsible for improving the rockets of Hamas,” Kuperwasser said.

While Israel has not commented on the deaths of the scientists or the two IRGC members, they fit a pattern of targeted attacks on Iranian soil attributed to the Jewish State, the most high-profile of which was the November 2020 killing of top Iranian nuclear scientist Mohsen Fakhrizadeh.

They also accord with a strategy articulated by Prime Minister Naftali Bennett, who has described Iran as an octopus whose tentacles wrap around Israel via Tehran’s terrorist underlings.

“In the past year, the State of Israel has taken action against the head of the terrorist octopus and not just against the arms as was done in previous decades,” Bennett stated on June 7 during a meeting of the Knesset Foreign Affairs and Defense Committee. “The days of immunity, in which Iran attacks Israel and spreads terrorism via its regional proxies but remains unscathed, are over.”

Amid threats of Iranian retaliation, Israel’s Counter-Terrorism Bureau on Monday raised its travel warning to Istanbul to a maximum Level 4.

“Having failed to target senior Israeli officials, Iran is trying to target ordinary Israeli citizens,” said Hay Eytan Cohen Yanarocak, a researcher at both the Jerusalem Institute for Strategy and Security and the Moshe Dayan Center for Middle Eastern and African Studies.

“All of Turkey is at Level 3 and Istanbul is at four out of four. This is something extraordinary, and in my opinion, it indicates that we have very strong intelligence that there’s a high possibility of a terror attack against Israelis,” Yanarocak told JNS.

According to Channel 13, Israeli security forces recently whisked a group of Israeli tourists to safety as an Iranian hit squad was waiting for them at their Istanbul hotel.

“It’s no coincidence that Iran is focusing on Turkey,” Yanarocak said. “Iran feels challenged by Turkey’s reconciliation with Israel. It wants to punish Turkey in terms of tourism. Israeli tourists will not come to Turkey if they see it’s a terrorist trap.”

Gallia Lindenstrauss, senior research fellow at the Institute for National Security Studies, agreed, telling JNS, “The main motivation for the Iranians is to achieve operational success, to take revenge for what they see as the Israeli attacks. But it also causes a rupture between Israel and Turkey and also between Turkey and the Gulf states, where we also are seeing a rapprochement currently.”

Turkey is an inviting operational grounds for Iran “because it’s a popular destination for Israelis and also Iranians can go there relatively freely,” Lindenstrauss said.

Israel’s fear of an attack on its nationals in Turkey is real, she said, pointing to an unusual statement on Monday by Foreign Minister Yair Lapid. “If you’ve planned a flight to Istanbul, cancel it,” Lapid said. “No vacation is worth your lives and the lives of your loved ones.”

In the interim, Yanarocak said that “Israel is always updating Turkey and there’s cooperation between the two sides, so I don’t think that there will be a crisis.”