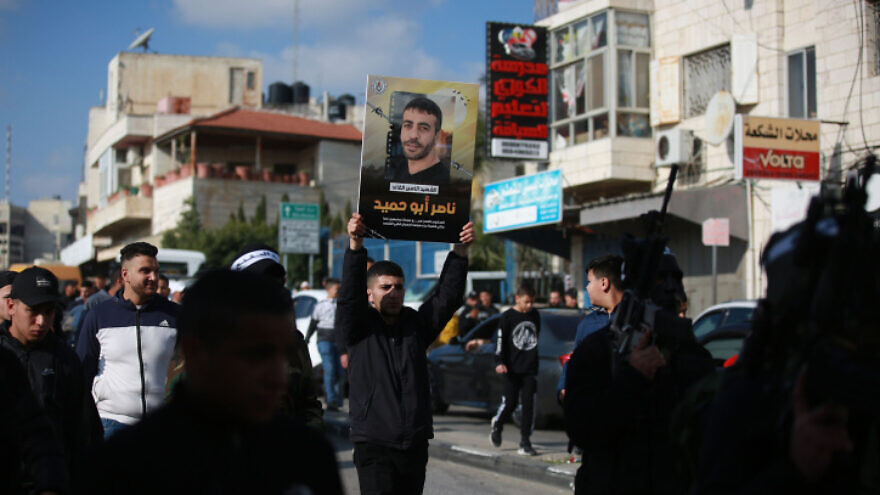 (January 1, 2023 / JNS) The U.S. State Department declined to criticize the Palestinian Authority president and prime minister after they praised and glorified a recently-deceased Palestinian terrorist, responsible for the murder of seven Israelis, including two American citizens.

On Dec. 20, Nasser Abu Hamid (sometimes spelled Abu Hmeid), a founder and the commander in Fatah’s U.S.-designated terror organization Al-Aqsa Martyrs Brigades, died in an Israeli prison. Responsible for a string of terror attacks during the Second Intifada including the murders of Americans Binyamin and Talia Kahane, he had also previously been found guilty of murdering five Palestinians who collaborated with Israel.

Following Abu Hamid’s death, the official Palestinian Authority news agency, WAFA, released a statement from P.A. President Mahmoud Abbas announcing “to our people, the fighters, and the free people of the world the death of heroic martyr, prisoner and commander Nasser Abu Hmeid, who died as a martyr today as a result of the policy of deliberate medical neglect, ‘slow murder.’ ”

Abu Hamid died of lung cancer. The Palestinian Prisoners and Ex-Prisoners Affairs Commission along with other Palestinian groups accused the Israel Prison Service (IPS) of negligence and deliberately killing Abu Hamid, saying his illness should have been discovered earlier and treated with more care.

Abbas also referred to Abu Hamid’s family as having “constituted an example of sacrifice and resolve. He [Abbas] prayed to Allah, glorified and praised, that He endow them with patience and consolation.”

Four of Abu Hamid’s brothers are serving multiple life sentences for the murder of Israelis, while a fifth brother was killed during an attempted arrest after he allegedly murdered an Israeli.

P.A. Prime Minister Mohammad Shtayyeh also released a statement through WAFA, saying, “We also console ourselves and our people over the loss of a fighter and pure-hearted son of Palestine, who sacrificed his freedom for the honor and freedom of his people and his homeland.”

In response to an inquiry from JNS about the Palestinian leaderships’ glorification of terrorism, a State Department spokesperson responded that “the United States is wholly opposed to terrorism. We have made this position clear on many occasions and will continue to do so. We call on all parties to take steps to calm tensions and to bring peace and prosperity to the region.”

The response failed to directly address this instance of the praise of terrorism by the highest levels of the Palestinian Authority’s political echelon.

The State Department, under current Secretary of State Antony Blinken, regularly and directly criticizes the Israeli government for its military activities, including counterterrorism operations, when they have resulted in death or injury to noncombatants.