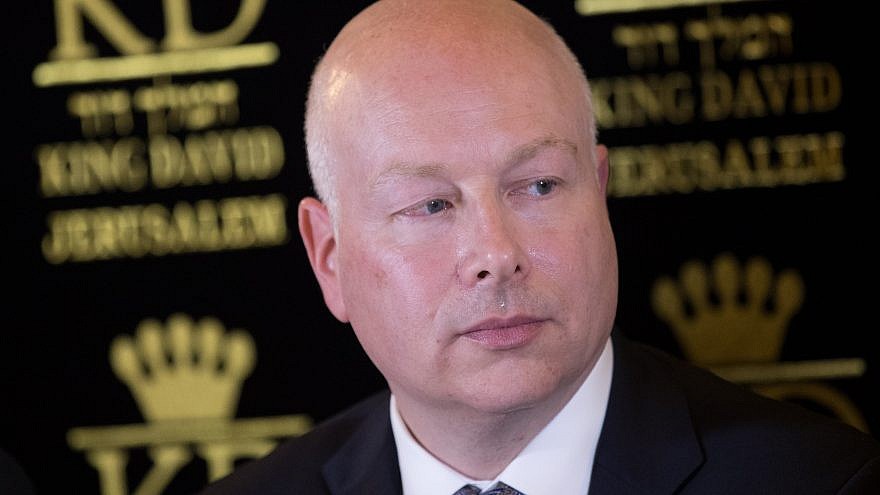 (December 27, 2021 / JNS) For former U.S. President Donald Trump’s point man on the negotiations that kickstarted the process leading to the Abraham Accords, there is a lesson to be drawn from going low-key.

A book set to come out this June from Jason Greenblatt, titled In the Path of Abraham: How Donald Trump Made Peace in the Middle East—and How to Stop Joe Biden from Unmaking It, won’t grab headlines with expletive-laden quotes or soap-opera quality drama, but instead will focus on the behind the scenes process in formulating the Trump administration’s Middle East policies. Greenblatt spent nearly two decades in various senior positions at the Trump Organization, including as an executive vice president and chief legal officer. In his surprise appointment by Trump as an assistant to the president and special representative for international negotiations, Greenblatt served as the White House special envoy to the Middle East, playing a pivotal role in the Peace to Prosperity Plan, which became a forerunner to the Abraham Accords.

Greenblatt entered this sensitive position with global consequences holding no past diplomatic credentials. But in an interview with JNS, Greenblatt said he never felt incapacitated by his lack of experience in the field.

“I don’t want to sound arrogant when giving this answer, but I did not feel like I had my hands tied behind my back in any way. And there are a combination of reasons for that. Number one is that we—and I—did study very, very hard. So, I came in very prepared and I credit the National Security Council, the State Department and help from people who worked on the file before me because I was able to come in very, very prepared. The second is I learned over time that experienced diplomats might be hard-working, dedicated and well-intentioned, but that doesn’t mean that they have the answers. There really are no experts anymore on this file. This file has been around too long. What there are now are a lot of people with very strong opinions,” said Greenblatt.

He added that “people consider me an expert, but I’m no more of an expert than anybody else. I just have very current information and opinions. So, I realized that just because somebody who is a longstanding diplomat sits in your office in the White House and tells you all sorts of things, that doesn’t mean he has the answers any better than you.”

Greenblatt said he tried to cooperate with media during his time in the White House, but outlets often grew frustrated with his unwillingness to leak information and to keep his circle’s work secret, which he felt was imperative to its eventual success. He intends to carry that spirit forward to his new book, even as he shines a light on the process that led to the Abraham Accords.

“I wasn’t going to write a book because the few publishers who had approached me about writing one were only interested in having a book that was gossiping—like, ‘Tell me all the secrets about Donald Trump. You worked for him for nearly a quarter-century. You must have a lot to say.’ And I said I just wasn’t interested in that kind of book. But it’s only after people—non-publishers—kept pressing me, that there’s so much in the three years that I have from behind the scenes that can explain why we did what we did, what we learned from everybody, about our approach, that I decided to write it,” said Greenblatt. 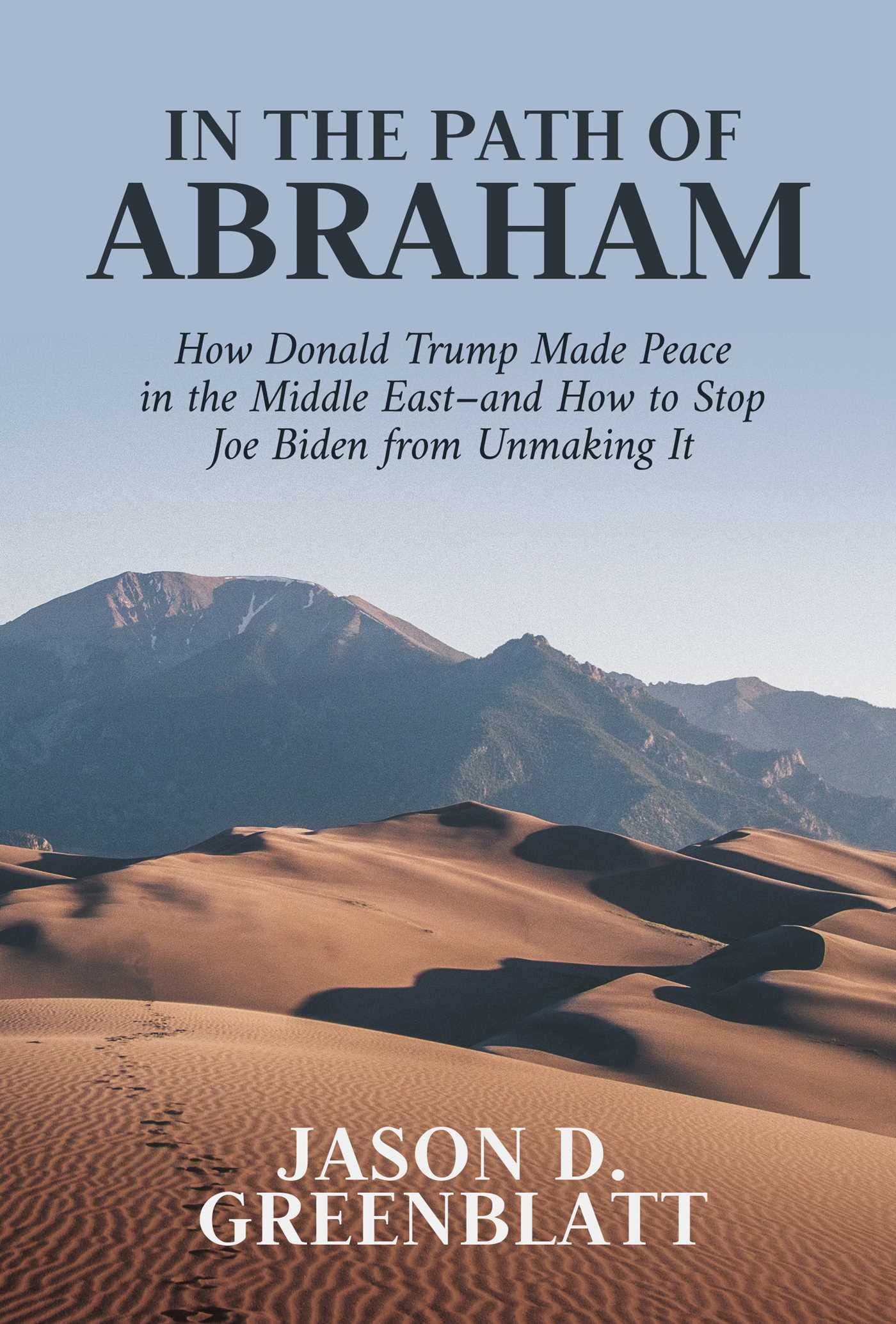 The book cover for “In the Path of Abraham: How Donald Trump Made Peace in the Middle East—and How to Stop Joe Biden from Unmaking It” by Jason Greenblatt. Source: Amazon.

‘It is a troubled region’

It’s tough for anyone who worked on Middle East peace in Trump’s White House to avoid questions about the revelatory quotes from Trump in Israeli journalist Barak Ravid’s blockbuster book, Trump’s Peace: The Abraham Accords and the Reshaping of the Middle East. This includes Trump’s comment that he initially thought then-Israeli Prime Minister Benjamin Netanyahu wanted peace, while Palestinian Authority President Mahmoud Abbas was against it, only to later change his point of view.

It made many Israel supporters wonder how Trump, seen by his fans as someone with a talent for cutting through others’ malarkey, could have been duped in his brief time with Abbas.

“Well, I agree that President Trump does have this talent of cutting through the bologna and zeroing in on, ‘Is this guy going to be my partner or not going to be my partner? Can I rely on him to do a deal?’ I don’t agree with this view of Bibi Netanyahu not wanting peace and President Abbas wanting peace. The best way I can explain it is President Abbas, when he’s in diplomatic meetings, is very clear. He seeks peace, but the devil’s going to be in the details. What does his view of peace look like? Is it a peace that Israel realistically can agree to or is it not? … President Trump would not have had the benefit of President Abbas sitting there and explaining exactly what peace means to him. So, I think the words that President Abbas uses are words everybody likes to hear,” said Greenblatt.

With a potential Trump run for the White House in the cards for 2024, Greenblatt was asked about his feelings on Trump’s views on Israel, especially in light of some of the harsh statements from Trump in his interviews with Ravid.

“So, I think pre-White House, he respected Israel, he admired Israel—a young country in a very rough neighborhood that ends up being hugely successful in so many ways. And I think that viewpoint is shared by many, many Americans. When you get into office, though, you realize it’s not just about this big-picture success, of this country that’s always in danger, always trying to protect yourself. But there are real, everyday dangers and issues that come up that the U.S. government, as perhaps Israel’s best friend in the whole world, that we have to deal with,” said Greenblatt.

“But I think as you judge through the policies, and less the Barak Ravid quotes, which I’m not saying aren’t accurate because we all heard them with their own ears. But those are mere seconds in four years of the president’s policies. And I think the policies that were implemented with respect to Israel show the true feeling and nature of Donald Trump as it relates to Israel,” he said. 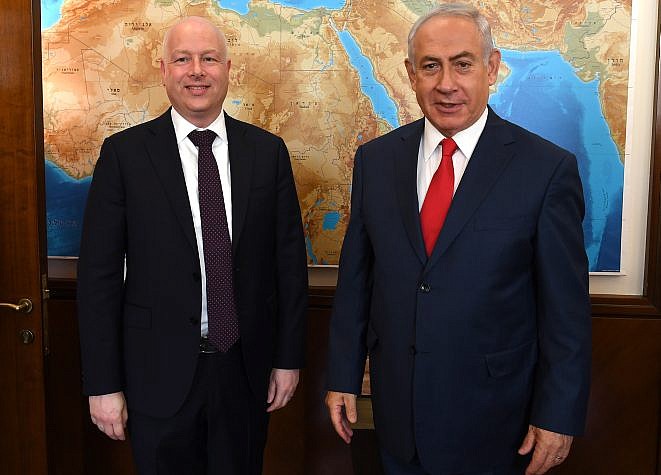 ‘It is a troubled region’

A significant portion of Greenblatt’s book includes a warning of sorts to the administration of U.S. President Joe Biden of the pitfalls of not just rolling back the Abraham Accords, but of a failure to substantially move them forward. The administration was criticized in its early months for refusing to even call the series of Israeli-Arab normalization agreements by their widely-recognized Abraham Accords name, and for redirecting its foreign policy focus away from the Middle East, leaving the potential progress of the historic accords stuck in the mud, as the Biden administration focused more effort and political capital on other issues, both foreign and domestic.

Greenblatt said he has noticed a promising pivot in the White House’s policy on the matter, even if it was pushed into it by failure elsewhere.

“You don’t always know what’s going on behind closed doors, so this is really just my best guess, and I’m not accusing them of having done anything wrong. I think [the early hesitation to advance the Abraham Accords] was probably a mixture of two things: Other priorities and a hesitancy to adopt anything from the previous administration. I think they were very reluctant to pick up the reins from the Trump administration for things. So, they were trying to figure out how they could do it without using names like Abraham Accords, but enough pressure came on them from the media,” said Greenblatt, referencing a particular State Department press conference in which spokesperson Ned Price became nonplussed when asked repeatedly why the administration refused to adopt the moniker in public statements and downplayed the success of the Abraham Accords before the White House finally started coming around on the matter in the fall.

Greenblatt conceded that many others have been caught off-guard by how rapidly the Middle East has changed—something he said his Jewish education and readership of Jewish media hadn’t prepared him for. He said the world still needs to play catch-up to the events of the last few years.

“I’ll go so far as to say, it’s not just the Jewish media. I think the media in general paints the Arab world very often in a particularly negative way. It is a troubled region. We know that there’s unfortunately a lot of conflicts; the Israeli-Palestinian conflict is only one of many in the region,” he noted.

“But, I think that everybody—in terms of Jewish education and beyond—should really start fresh. We should completely revamp the books to show not just the Abraham Accords with the vision each of these leaders in the Gulf countries, plus Morocco, have because to do anything less than that is doing a disservice, not only to the Arab countries that are dramatically changing so positively but to our own kids who are not understanding that the world of even four, five years ago is very different than the world today,” said Greenblatt. 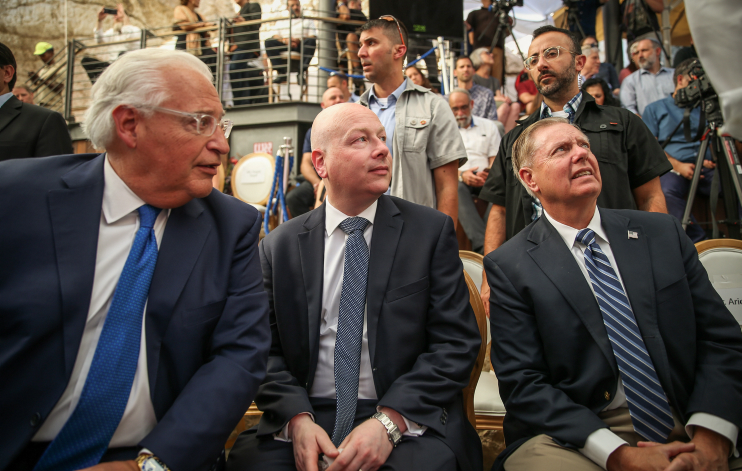 From left: Former U.S. Ambassador to Israel David Friedman with former U.S. Middle East envoy Jason Greenblatt and Sen. Lindsey Graham (R-S.C.) during the opening of an ancient road at the City of David archaeological site in Jerusalem, June 30, 2019. Photo by Flash90.

In addition to his authorship, Greenblatt is hosting a regular podcast on behalf of Newsweek, called The Diplomat. His main work these days comes through his Abraham Venture, which seeks to connect businesses in Israel and the Gulf.

“More and more, I realize how thirsty everybody is for that connection. Connection in culture, connection in business, connection in friendship. So, I have a group of companies that I introduced to the Arab countries. Some of the deals work out, some of them don’t work out, but the friendships that are formed, the business relationships that are formed are real. They’re strong, they’re warm and I hope to continue doing this because it’s a passion of mine,” said Greenblatt.