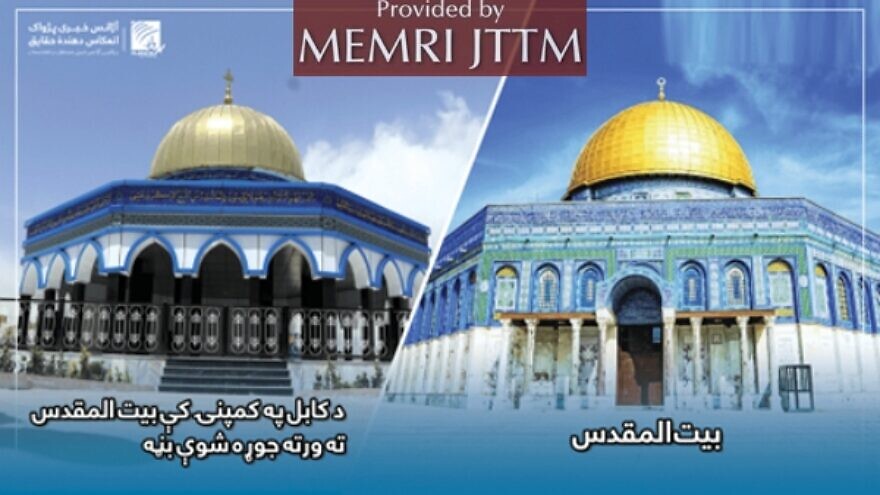 An image of the Dome of the Rock replica (left) built by the Taliban in Kabul, Afghanistan, next to an image of the original in Jerusalem. Credit: MEMRI.
Spread the word.
Help JNS grow!
Share now:

(May 31, 2022 / JNS) The Taliban published issue No. 196 of its official Arabic-language monthly magazine, Al-Somood, which included an article comparing Kabul to Jerusalem, the Middle East Media Research Institute’s Jihad and Terrorism Threat Monitor (MEMRI-JTTM) stated in a report shared with JNS.

In the editorial, a parallel is drawn between Kabul, the capital of Afghanistan, and its “sister city.”

The writer argues that Kabul was the first of the two cities to achieve liberation when freed from “the oppressive American occupation that lasted 20 years.”

On May 18, the Kabul municipality inaugurated a replica of Jerusalem’s Dome of the Rock.

The article asserts that the replica represents the unity of the Islamic nation and serves as a “reminder of the dangers, threats and repeated violations to which Al-Haram Al-Sharif [the Arabic name for the Temple Mount containing the Dome of the Rock and Al-Aqsa mosque] has been exposed.”

According to MEMRI, several ISIS supporters criticized the project.

A pro-ISIS media outlet, the Al-Adiyat Foundation, printed a poster arguing that the building of a Dome of the Rock model had initially been proposed by Libya’s f0rmer leader Moammar Gaddafi and was widely mocked at the time. Kabul, Afghanistan, in March 2020. Credit: Weaveravel via Wikimedia Commons.
Republish this article in your newspaper or website