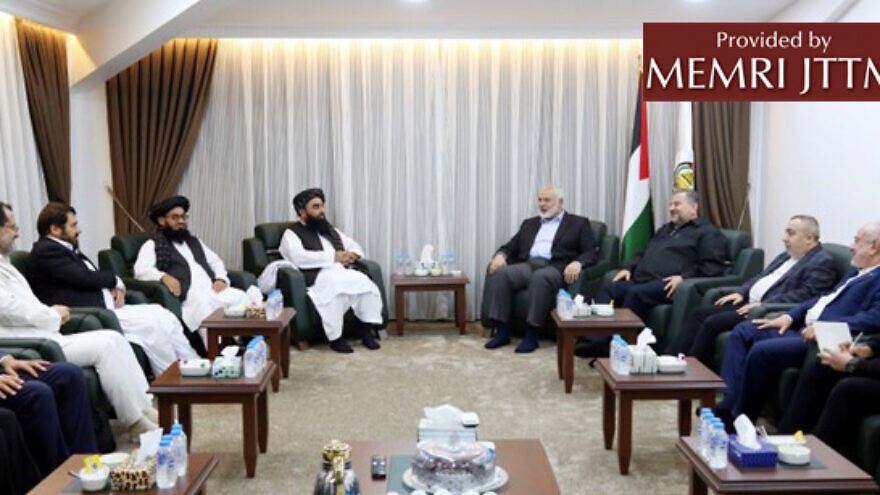 (November 2, 2022 / JNS) Leaders of the Afghan Taliban and the Palestinian terror group Hamas met in Istanbul at a conference of Islamic religious scholars, according to the Payam Aftab news agency.

The Taliban delegation was reportedly led by Zabihullah Mujahid and the Hamas delegation included Ismail Haniyeh and other Hamas leaders.

According to a report by the Middle East Media Research Institute (MEMRI)’s Jihad and Terrorism Threat Monitor, Mujahid, the Taliban’s deputy information minister, posted a photo on Twitter of himself and his delegation meeting with Haniyeh and other members of Hamas.

Mujahid said the delegations discussed the Palestinians and the current situation in Afghanistan. He added that “Palestine” was an issue for the entire Muslim ummah (nation).

The meeting came just weeks after Israeli media reported that Taliban officials favored the establishment of diplomatic relations between Afghanistan and Israel.

Meanwhile, according to Iran’s Shahr Ara News, Haniyeh hosted a delegation from Afghanistan led by Mujahid, and the two sides discussed recent developments in Jerusalem, at the Al-Aqsa Mosque and in Judea and Samaria, as well as climate change and international developments in general. It is unclear whether this was a separate meeting.