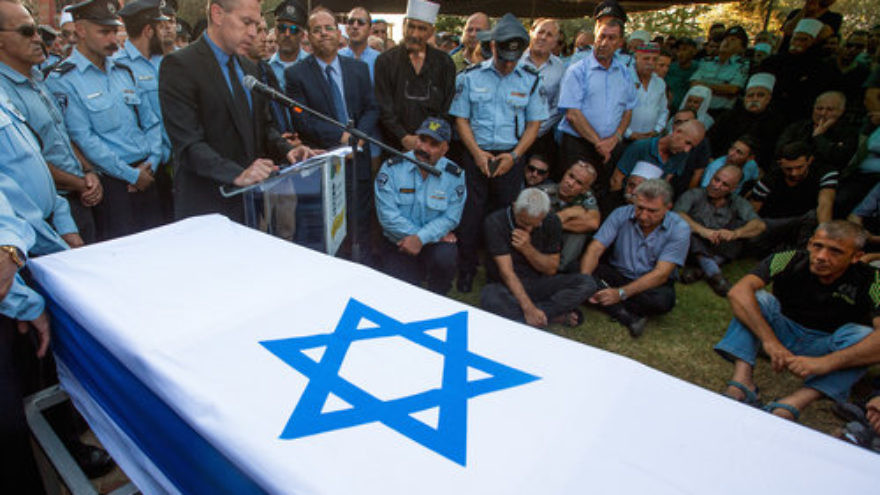 Last Friday’s deadly terror attack near the Temple Mount shows how Israel is at the forefront of the clash of civilizations between the Islamic world and the West—not only with the Palestinians and surrounding Arab countries, but also from within its own minority populations.

Arabs make up about 20 percent of Israel’s population. While Israeli Arabs maintain a higher quality of life than their brethren in most other places in the Middle East, a significant number of them support the Palestinian struggle against the Jewish state. Yet some smaller minority groups in Israel, such as some Christians and the Druze, are largely supportive of the state.

Israeli officials blamed the Temple Mount attack on the ongoing incitement by the Islamic Movement in Israel, an affiliate of the worldwide Muslim Brotherhood movement. The leader of the Islamic Movement’s Northern Branch, Sheikh Raed Salah, said Israel was responsible for the attack and that he prays for the terrorist “martyrs” who carried it out, according to a video posted by the Middle East Media Research Institute.

Rafa Halabi, an Israeli Druze who recently stepped down from his role as an adviser to Communications Minister Ayoub Kara (Likud), who is also part of the Druze community, told JNS.org, “The problem is that Arab political leaders of the Joint List (the Knesset’s alliance of Arab parties) and the Islamic Movement are simply starting a war—they don’t speak about peace, but incite for war.”

Halabi, who served as a senior officer in the IDF for 15 years, said that he visited the families of the Temple Mount attack victims, and saw some local Muslim and Christian leaders there who called for coexistence. Halabi said the Israeli government should enforce the law by destroying the homes of the terrorists.

Atta Yemini Farhat, chairman of the Druze Zionist Council for Israel, told JNS.org the terrorist attack was partially a result of the lack of support for IDF soldier Elor Azaria, who was convicted of manslaughter for killing an immobilized Palestinian terrorist in Hebron last year. Farhat, who reached the rank of major in the IDF, said the Azaria verdict “makes the terrorists feel stronger.”

Farhat estimated that around 90 percent of Israeli Druze “call for destroying the terrorists’ homes, not giving them national insurance benefits, and revoking their families’ citizenship and deporting them to Gaza.”

Druze support for the state

Israeli Druze claim they are descendants of Jethro, the father-in-law of Moses. “We have been supporting the nation of Israel for 3,000 years,” said Farhat, adding, “We don’t believe in [the prophet] Muhammad and our men do not marry four wives, but just one, and we don’t fast during Ramadan.”

Druze are drafted into the IDF, unlike Arab Muslims and Christians, who are not required to serve but can volunteer.

Meanwhile, Farhat explained that since Syrian Druze residing in the Israeli Golan Heights are worried about being forced to return to war-torn Syria, and concerned for the safety their family members who still live there, they are scared to identify with Israel. Yet Farhat asserted, “Privately, they will tell you they prefer to live in Israel, and many are now applying for Israeli citizenship since they now see no way of returning to the chaos [in Syria].”

According to Dr. Mordechai Zaken, head of minority affairs in the Israeli Public Security Ministry, there are around 135,000 Druze and 165,000 Christians in Israel, with each minority making up less than 10 percent of Israel’s total Arab population. More than 80 percent of Israeli Arabs are Muslim.

Druze community members reside in 22 villages on or around Mount Carmel in the Galilee and in the Golan Heights, where four of the Druze villages still have an association with Syria.

“The Druze constitute a distinct Arabic-speaking community,” Zaken told JNS.org, noting that a survey carried out in 2008 showed 94 percent of Druze self-identify as Israeli.

“While the Druze religion is not accessible to outsiders, one known aspect of its philosophy is the concept of ‘taqiyya,’ which is Arabic for ‘prudence, fear, caution,’ and in practice means that the tenets of the religion are not shared widely,” said Zaken. “Because of this defensive mechanism, the Druze are loyal to the regime of the country where they reside, whether in Syria or elsewhere….Therefore, the Druze are loyal to the state of Israel and serve in the Israel Defense Forces, unlike the Muslim Arabs of Israel. Many have served in high ranks within various branches of the government, particularly in the security forces.”

Explaining why Israeli security forces utilize the Druze at sensitive sites such as the Temple Mount, Halabi said the Druze “speak Arabic and understand Muslim culture more than Jews,” giving them an advantage in picking up small clues that can thwart terror attacks. Halabi estimated the majority of security officers guarding Jerusalem’s Old City are Druze.

“The Islamic Movement is very radical,” said Halabi, describing the movement as a “potential Hamas inside of the state” and “like the Islamic State from within.”

Farhat said Israel should deal with the Islamic Movement just as Egypt’s government has cracked down on the Muslim Brotherhood in recent years.

“I think Israel needs to enact emergency laws,” he said, “and detain the leaders of the Islamic Movement.”