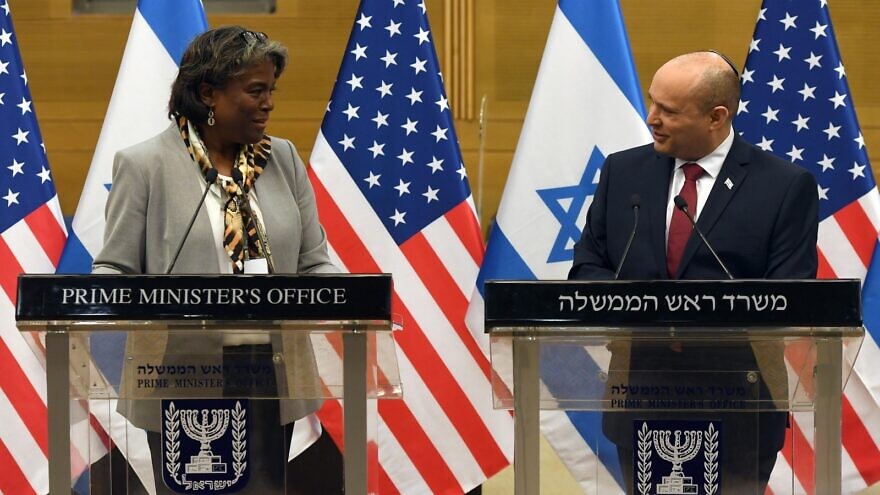 “Honored to see @IsraeliPM @NaftaliBennett again today in Jerusalem. We discussed our close cooperation at the @UN working to combat anti-Semitism and anti-Israel bias, and our approach to shared regional threats,” she wrote on Twitter.

According to the Israeli Prime Minister’s Office, Bennett thanked Thomas-Greenfield for “representing a voice of decency and reason in an institution that I think we can both objectively say is pretty biased in terms of its treatment of Israel.”

“I hope that during your visit here you can get a better picture of the unique challenges that we’re facing here, you know, with Iranian-backed terror groups across our borders,” Bennett said, adding that “you’ve always been standing up for us, you and the United States, throughout the years, standing on Israel’s side and serving as a voice of truth.”

Earlier, Thomas-Greenfield also met with Israeli Foreign Minister Yair Lapid and told him that “the United States will continue to encourage countries in the region to normalize relations and expand cooperation with Israel, including at the @UN.”

Lapid called Thomas-Greenfield a “true friend” who fights “shoulder to shoulder” with Israel at one of the most complex agencies in the international community.

I was happy to host @USAmbUN today. She’s a true friend who fights shoulder-to-shoulder with us in one of the more complex arenas in the international community. Our friendship is based not only on mutual interests, but on shared values and a shared worldview. ©️אסי אפרתי לע״מ pic.twitter.com/3dEZFn5Xlq

Her visit comes amid concern regarding the upcoming round of talks in Vienna over America’s attempt to re-enter the Iran nuclear deal. U.S. Special Envoy Robert Malley was also in Israel on Monday to consult with Israeli officials ahead of those talks.

Jerusalem has also expressed concern over the Biden administration’s plans to reopen the Palestinian consulate in Jerusalem. Last week, the United States also abstained on an anti-Israel resolution put forth on United Nations Relief and Works Agency for Palestine Refugees (UNRWA), which drew criticism.

The U.S. envoy also met with Israeli Transportation Minister Merav Michaeli, where she touted the infrastructure bill that U.S. President Joe Biden was scheduled to sign at the White House on Monday, as well as with Israeli President Isaac Herzog, who thanked her for “standing by Israel’s side at the United Nations, during ‘Operation Guardian of the Walls.’ ”

“I was deeply moved by my first visit to @YadVashem. Thank you to all those involved in creating this institution devoted to Holocaust remembrance and education, and to combating Holocaust denial and distortion.”

I was deeply moved by my first visit to @YadVashem. Thank you to all those involved in creating this institution devoted to Holocaust remembrance and education and to combating Holocaust denial and distortion. pic.twitter.com/hkWnlz2cqm

As part of her Mideast tour, Thomas-Greenfield is expected to meet with Palestinian officials in the West Bank and travel to Jordan.