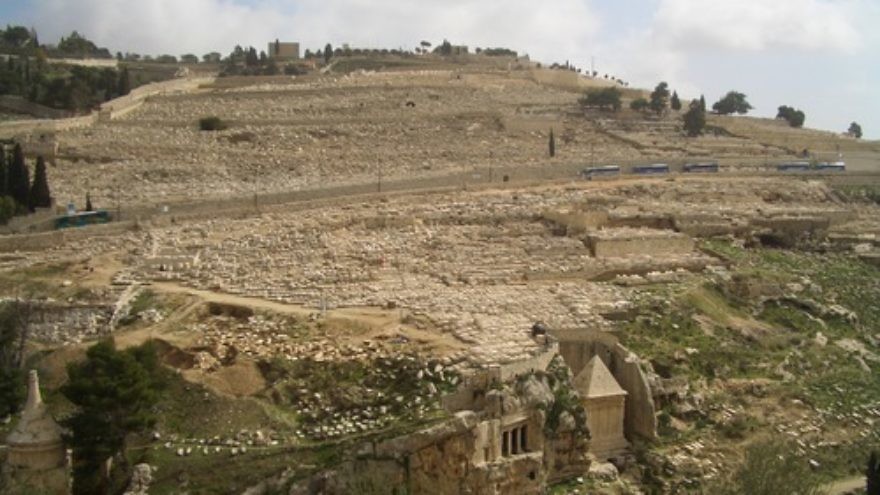 Leading up to Jerusalem Day this year, leaders of four U.S. Orthodox organizations in March sent a letter to Israeli Prime Minister Benjamin Netanyahu about what they called “continuous violence against visitors, rampant grave desecrations, dumping of refuse and gross defilement” by local Arab youths at Jerusalem’s Mount of Olives cemetery, casting fresh attention on the largest and oldest Jewish burial site in the world.

Additionally, in February 2012, a group of American Jewish visitors to the cemetery, including U.S. congressmen Elliot Engel and Jerrold Nadler (both Democrats from New York), was attacked by Arab rock-throwers.

According to Jewish tradition, the messianic redemption will begin at the Mount of Olives, which directly faces the Temple Mount, Judaism’s holiest site. The 3,000 year-old-cemetery is the site of approximately 150,000 graves, noted Malcolm Hoenlein, executive vice chairman of the Conference of Presidents of Major American Jewish Organizations, “Including three of our prophets, foremost Torah scholars, heads of Hassidic dynasties, and many of our national leaders over the ages, including prime minister Begin.”

In addition to those well-known personalities, the Mount of Olives cemetery also is the final resting place for a fascinating array of lesser-known but significant figures—some of them linked by history in an unusual ways.

As the great-granddaughter of Queen Victoria, Princess Alice of Battenberg boasted impressive royal English pedigree. In 1903, she married Prince Andrew of Greece and Denmark, and the couple settled in Athens. Despite suffering from congenital deafness and other health problems, Alice threw herself into charitable work. In the late 1930s, she took up residence in a small apartment in a rundown Athens neighborhood so as to immerse herself in aiding the poor.

Related by marriage to royalty in various countries, Princess Alice had relatives on both sides during World War Two. According to one anecdote, a German general who encountered the princess during the Nazi occupation of Athens in 1941 asked her, “Is there anything I can do for you?” She reportedly responded, “You can take your troops out of my country.”

More than 60,000 of Greece’s 75,000 Jews were deported to the Treblinka and Auschwitz death camps in 1943. Several thousand Greek Jews who went into hiding escaped the deportations. Among them was a widow named Rachel Cohen, whose late husband, Haimaki Cohen, had assisted Greece’s King George I several decades earlier and received, in return, a pledge of future help should he need it. In response to Mrs. Cohen’s plea, Princess Alice honored George I’s promise and sheltered the widow and her two children from the Nazis.

Before her passing at Buckingham Palace in 1969, Princess Alice, a devout Christian, left instructions that she be buried in the cemetery at the Church of Mary Magdalene, a 19th century Russian Orthodox church on the Mount of Olives. The princess had visited the site in the 1930s. It took 19 years, but in 1988 her family finally transferred Alice’s remains to Jerusalem for re-interment.

In 1994, Princess Alice was honored at Yad Vashem as one of the Righteous Among the Nations. Her son, Prince Philip, remarked at the ceremony that because his mother was “a person with a deep religious faith,” it probably “never occurred to her that her action was in any way special… She would have considered it to be a perfectly natural human reaction to fellow beings in distress.”

The outskirts of Athens, where Princess Alice’s apartment was located, are just a stone’s throw from some of the Adriatic and Aegean waterways leading to the Mediterranean, through which boats crammed with Jewish refugees passed as they headed for Palestine in the late 1930s.

Many of those sea journeys were organized by a young Zionist activist named Yitshaq Ben-Ami. The son of Lubavitcher Hassidim from Russia who were among the founders of Tel Aviv, Ben-Ami joined the Irgun Zvai Leumi, Palestine’s underground militia, in the 1930s. He and his comrades went to Europe in 1937 and, over the next two years, brought more than 20,000 Jews to the Holy Land in defiance of British immigration restrictions. (Death Be Not Proud author John Gunther, one of the American financial supporters of the operation, called it “Jew-running.”)

Then they headed to the U.S., where they set up a series of political action committees to promote the rescue of European Jewry and creation of a Jewish state. They were known as the Bergson Group, after their leader, Peter Bergson (real name: Hillel Kook). Ben-Ami was a central figure in the group’s leadership circle.

The Bergson activists used tactics that were unorthodox for their time, including full-page newspaper ads and lobbying Members of Congress. It was Ben-Ami who conceived the idea of creating a dramatic pageant—written by Academy Award-winning playwright Ben Hecht—to publicize news of the Holocaust. They called it “We Will Never Die,” and its performances were attended by more than 100,000 people. Ben-Ami also played a key role in organizing the group’s July 1943 Emergency Conference to Save the Jewish People of Europe. The event attracted national attention and presented practical steps that the Allies could take to aid Jewish refugees.

Ben-Ami enlisted in the U.S. Army in the autumn of 1943, and saw action at the Battle of the Bulge and elsewhere. After the war, he returned to help lead the Bergson Group’s campaign to mobilize American public support for creation of a Jewish state.

When he passed away in 1984, Ben-Ami was initially buried in Brooklyn, but when his wife Eve passed, in 2003, they were buried together on the Mount of Olives, as per his instructions. “Dad had a deep sense of Jewish national pride,” his son Jeremy told me. “The Mount of Olives was a symbol of that national heritage, as well as the final resting place for prior generations of his family.”

The rebbe who marched

Ben-Ami’s departure for military service dealt a blow to the Bergson Group, but others stepped in. One was Levi Yitzhak Horowitz, a recently married rabbinical student at Mesivta Torah Vodaas in Brooklyn. Three days before Yom Kippur in 1943, he left his studies to join four hundred other rabbis traveling to Washington, DC, to plead with President Franklin Delano Roosevelt to aid Jewish refugees. Organized by the Bergson Group and the Va’ad ha-Hatzala (a U.S. Orthodox rescue committee), it was the only such protest in the nation’s capital during the Holocaust.

Several years ago, I went with filmmaker Martin Ostrow (director of the award-winning PBS documentary, “America and the Holocaust”) to the home of Rabbi Horowitz, then known as the Bostoner Rebbe, to interview him about his participation in the march.

The 400 rabbis marched to the White House, only to be told by a staff member that the president was unavailable to meet a delegation of their leaders. Historians later found documents showing that FDR’s schedule was open that afternoon, and he easily could have met with the rabbis. “Given the situation [of Europe’s Jews], we thought President Roosevelt would meet with us, even if just for a few minutes,” the Rebbe said in our interview. “I was very surprised and disappointed that he was not willing to meet with us. Years later, when we began to realize the extent of the Holocaust, I felt even more disappointed at the president’s response—or, I should say, lack of response—to us.”

Hassidic rebbes do not usually take part in protest marches. Rabbi Horowitz not only took part in the 1943 march in Washington, but he also later organized one himself. When the 1967 Arab-Israeli war broke out, the Bostoner Rebbe immediately began organizing buses to bring Jews from Boston to Washington for a rally to urge U.S support for Israel. “Thinking back now, I am sure that my experience in 1943 played a major role in the way I reacted in 1967,” he told us. “That was the lesson I took from 1943.”

As the buses left Boston, the mood among the passengers was “desperate, almost hopeless,” the rebbe said. “We thought Israel could be losing the war.” When they reached Washington, the protesters from Boston marched to the rally site, at the Lincoln Memorial. “But when we arrived,” the Bostoner Rebbe recalled, “the crowd that had already gathered there told us the news that the Arabs had surrendered, and Israel had won the war. Spontaneously, a huge dance erupted. We all joined hands, hundreds and hundreds of people, Jews of every kind, celebrating. It was a beautiful Kiddush Hashem [sanctification of God’s Name].”

The Bostoner Rebbe passed away on Dec. 5, 2009, and was buried on the Mount of Olives.

A princess who hid Jews from the Nazis. A young activist who smuggled refugees to the Holy Land. A Hassidic rebbe who marched to the White House. Three remarkable individuals who never knew one another, but each came to the aid of European Jews during their darkest hour, and who today are buried just a short distance from one another on Jerusalem’s Mount of Olives.

Dr. Rafael Medoff is founding director of The David S. Wyman Institute for Holocaust Studies, in Washington, D.C. His latest book is “FDR and the Holocaust: A Breach of Faith.”