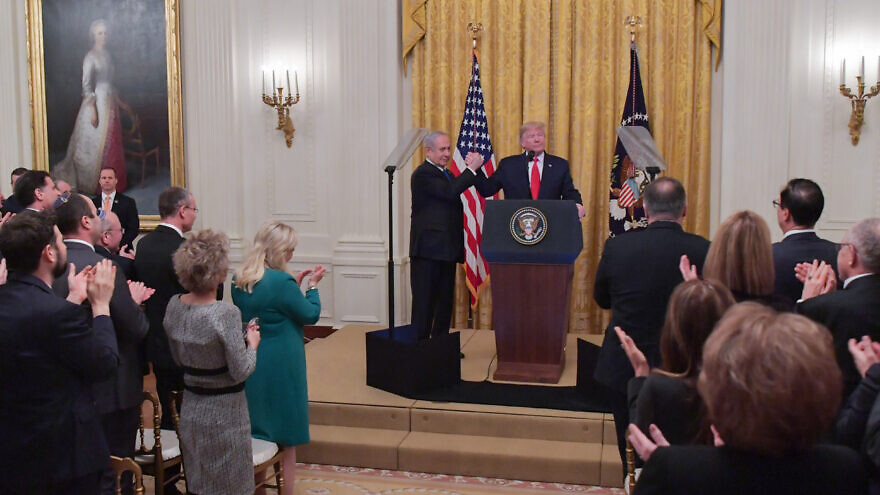 “We are not here to lecture—we are not here to tell other people how to live, what to do, who to be, or how to worship. Instead, we are here to offer partnership based on shared interests and values to pursue a better future for us all,” said Trump, as he revealed a plan that is the “most serious, realistic and detailed plan ever presented—one that could make Israelis, Palestinians and the region safer and more prosperous.”

While on paper the “deal of the century,” as it has been called, offers sizable chunks of land to Israel, Trump said the Palestinians must get their fair share as well. He mentioned multiple times the goal of the United States to help move the Palestinians along, offering them an improved quality of life for their families and children.

That said, he stressed that the violence needs to end, and that the Palestinians must recognize Israel as the Jewish state and resolve the refugee issue outside of Israel.

The plan does recognize Jerusalem as Israel’s capital, while safeguarding Israel’s security, and taking its legal and historical claims into account.

“Peace requires compromise, but we will never require Israel to compromise on it security,” stressed the president.

The proposal recognizes a demilitarized Palestinian state with its capital in eastern Jerusalem “located in all areas east and north of the existing security barrier, including Kafr Aqab, the eastern part of Shuafat and Abu Dis, and could be named Al-Quds or another name as determined by the State of Palestine,” with a future U.S. embassy there. It also requires the U.S.-designated terrorist group Hamas to be disarmed.

This is what a future State of Palestine can look like, with a capital in parts of East Jerusalem. pic.twitter.com/39vw3pPrAL

“Jerusalem’s holy sites should remain open and available for peaceful worshippers and tourists of all faiths,” states the 180-page plan. “People of every faith should be permitted to pray on the Temple Mount/Haram al-Sharif, in a manner that is fully respectful to their religion, taking into account the times of each religion’s prayers and holidays, as well as other religious factors.”

The plan “maximizes ease of travel within the State of Palestine through state-of-the-art infrastructure solutions comprised of bridges, roads and tunnels, and provides significant benefits well beyond the borders of the State of Palestine” that could, for example, include “a high-speed transportation link that will enable efficient movement between the West Bank and Gaza, crossing over or under the State of Israel’s sovereign territory.”

Israel would maintain security responsibility west of the Jordan River. Israel is expected to annex the Jordan Valley.

Israel agreed to a four-year freeze on undeveloped land in Area C that will be allocated for a future Palestinian state to secure the possibility of a two-state solution.

No Israelis or Palestinians would be uprooted from their homes, according to the plan.

The president stressed that the violence needs to end, and that the Palestinians must recognize Israel as the Jewish state and resolve the refugee issue outside of Israel.

Trump also noted the formation of a committee to create a detailed map as the foundation for negotiations.

Were the Palestinians to accept the plan, some $50 billion would be injected into the Palestinian economy to create “peace and prosperity for the Palestinian people,” he said, adding that “there are many countries that want to partake in this.”

And he alluded to the fact that if all goes as planned, the Palestinian poverty rate will eventually “be cut in half, and their GDP will double and triple.”

‘Israel will be prepared to negotiate peace right away’

A quietly ebullient Netanyahu accepted the plan and praised the president for his and his administration’s efforts. His political rival, Blue and White Party leader Benny Gantz, met with Trump on Monday and also accepted the plan, saying he would implement if he wins the Israeli election on March 2.

“If [the Palestinians] are genuinely prepared to make peace with the Jewish state,” said Netanyahu in his remarks at the White House ceremony. “Israel will be prepared to negotiate peace right away.”

The plan recognizes Jerusalem as Israel’s capital, while safeguarding Israel’s security, and taking its legal and historical claims into account.

Regarding the West Bank, Netanyahu told Trump, “On this day, you became the first world leader to recognize Israeli sovereignty over areas of Judea and Samaria. And on this day,, you, too, have charted a brilliant future.”

The Israeli leader said that instead of the plan playing “lip service to Israel’s security,” it recognizes that “Israel must have sovereignty in places that enable Israel to defend itself by itself.”

“For too long, the heart of Israel has been outrageously branded as illegally occupied territory,” continued Netanyahu. “Today, Mr. President, you are puncturing this big lie. You are recognizing Israel’s sovereignty over all Jewish communities in Judea and Samaria—large and small alike.”

Ahead of its release, the Palestinians rejected the peace plan. Trump said he sent a copy of it to Palestinian Authority leader Mahmoud Abbas, who insinuated that he won’t quell violence that might result from the release, and instead has been seen as fomenting it.

“Trump, Jerusalem is not for sale. Our rights are not for sale. Your conspiracy deal will not pass,” Abbas said in an address in response to the plan, reported Haaretz.

Abbas said that the Palestinians are willing to negotiate, together with other nations, but not with the United States alone. “There are still some in the U.S. who differentiate good from bad. There are Jewish organizations that reject the deal, like J Street,”Abbas said in an address that included representatives from the Palestine Liberation Organization, Hamas and Islamic Jihad in Ramallah.

A spokesperson for Netanyahu said the prime minister intends to announce full annexation of Israeli settlements and the Jordan Valley.