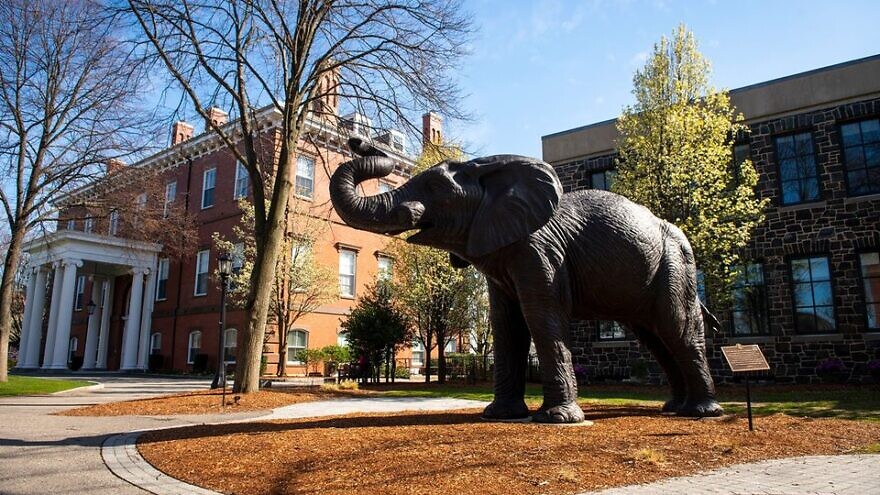 (January 21, 2022 / JNS) Tufts University president Tony Monaco announced that the school will be taking new measures to combat campus anti-Semitism head-on, according to a letter sent to students, faculty and staff on Thursday.

According to the letter, the university and its board began looking into anti-Semitism’s rise on college campuses nationally and on its own campus specifically at the end of last academic year through an ad hoc committee of senior leaders and board members. The effort was a collaboration with Hillel International and the TCC Group, an external group that the letter stated has expertise in such matters.

The effort involved 40-plus focus groups comprised of undergraduate students, faculty, staff, alumni and trustees, in addition to a campus-wide survey.

The survey, which received what Monaco called a “modest” response, provided insight into trends and observations in conjunction with the focus groups.

It found that while Jewish students feel the campus has a thriving community with organizations such as Tufts Hillel and Chabad, as well as a diverse array of programming, more than half the Jewish students who responded to the survey reported having observed some form of anti-Semitism on campus.

The university also heard from Jewish students who felt that if they wanted to be involved in social-justice groups, they had to hide their identities. Some faculty and staff also noted a climate of anti-Semitism around topics related to the Israeli-Palestinian conflict, and that a line between political speech and anti-Semitism has been hard to find.

“This work was guided by our collective belief that anti-Semitism, discrimination and harassment of any form should not be tolerated at Tufts and our commitment to ensure that all members of our community can express their religious and cultural identity free from fear, discrimination or prejudice,” wrote Monaco.

While not alone among North American college campuses, Tufts University has amassed incidents of anti-Semitism over the past few years, including the theft of a mezuzah from a student’s dorm room door; the attempted intimidation of student leader, Max Price, by the university’s Students for Justice in Palestine chapter; and anti-Semitic tweets by a dental student at the school among other incidents.

In the letter, Monaco outlined recommendations proposed by the school to fight anti-Semitism, developed through the focus groups and survey.

The steps include training for students, faculty and staff on what is considered anti-Semitism, including orientation for incoming students on what constitutes anti-Semitism distinct from other forms of race and ethnicity-based discrimination; conversations and forums on understanding the geopolitical situation in the Middle East; better awareness of the Office of Equal Opportunity processes and improved communication to the community about the processes; and the creation of a university-wide advisory council of faculty and staff to advise senior leadership.

Tufts has also joined Hillel’s Campus Climate Initiative to help assess anti-Semitism on campus and learn from the best practices of other institutions.

“We are not immune from the rise in anti-Semitism across the nation, including the alarming incident in Texas just this past week,” wrote Monaco. “It is incumbent that we take active steps to combat it on our campus. You have my commitment that we will work on these recommendations to improve the quality of Jewish life at Tufts and to combat campus anti-Semitism in its various forms.”

The president’s letter received praise from Alums for Campus Fairness.

Tufts chapter leader Susan Price said in a statement that the nonprofit organization “agrees that understanding the definition of anti-Semitism, teaching how anti-Semitism is unique from other biases, and conducting orientation training, and training for faculty and staff, is very important in this endeavor.”