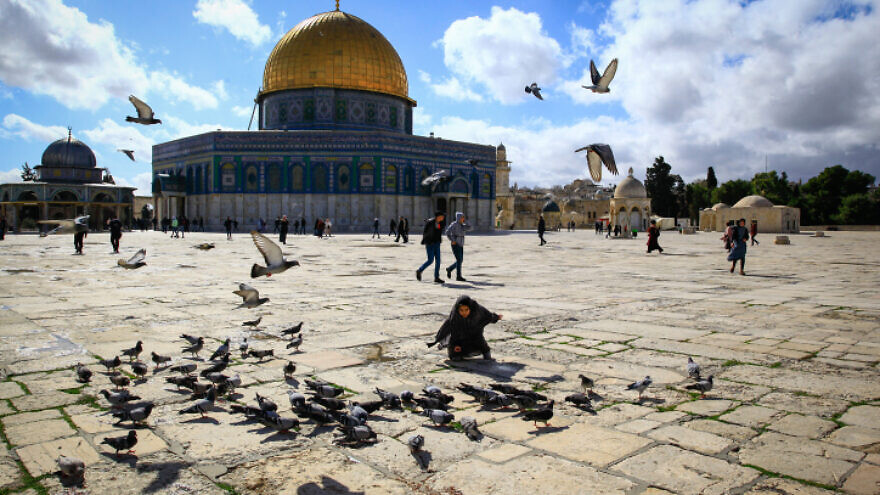 Muslim children play with pigeons at the Dome of the Rock, in Jerusalem's Old City, on Jan. 31, 2020. Photo by Sliman Khader/Flash90.
Spread the word.
Help JNS grow!
Share now:

(June 4, 2020 / Israel Hayom) While Israel, the United States, Saudi Arabia and Jordan are holding talks about including Saudi representatives in the Islamic Waqf, which administers the Temple Mount compound, new details are emerging about a new Islamic center located near the mount and the Western Wall that is reportedly funded by Turkey.

According to a new report from a Jerusalem think tank, the center is known as the “Khan Abu Khadija.” The center’s building was renovated by the Turkish government aid organization TIKA, which has been investing heavily in eastern Jerusalem in recent years in an attempt to increase Turkey’s influence there.

The new center hosts Arab tourists in eastern Jerusalem, including some with links to the Muslim Brotherhood and Turkey. TIKA has been providing money to shuttle tens of thousands of Arab visitors from the Galilee and the Triangle region of Arab towns east of Netanya to Al-Aqsa Mosque.

On display at the center are study guides about the “true heritage” of Jerusalem and Al-Aqsa, some published by TIKA, alongside PLO and Turkish flags and pictures documenting dawah (community charity that aims to bring people closer to Islam) activity on behalf of Palestinian residents of Jerusalem.

The center also features pictures of Ottoman Sultan Abdul Hamid II, who was accused of committing genocide against the Armenian people and was a staunch opponent of Theodor Herzl’s vision of a Jewish state, along with pictures of Turkish President Recep Tayyip Erdoğan. The center regularly screens a film that includes clips of an Erdoğan speech in which the Turkish leader refers to “occupied Jerusalem.”

According to Middle East expert Dr. Mordechai Kedar, the center is another foothold for “revolutionary Islam” in the heart of Jerusalem.

“This is how they buy the public with a big hug from Turkey—through business, tourism, and money,” said Kedar.

“The ‘heritage’ on display at places like the Khan center seeks to redefine the present in eastern Jerusalem. The Khan, like other similar centers, is an expression of the spirit of the Muslim Brotherhood coalition led by Erdoğan, against other Muslim institutions supported by Saudi Arabia or Jordan, which are now in a position of retreat and weakness in east Jerusalem,” he added.

The Turkish group Our Heritage, which is active in trying to increase Turkey’s presence in eastern Jerusalem, has recently launched a fundraising campaign for Arab residents of the east of the city under the title “Jerusalem is Suffering from the Plague of Occupation and the Plague of Coronavirus.”

At the end of the Islamic holy month of Ramadan in late May, Our Heritage distributed food parcels and cash to eastern Jerusalem residents. The Turkish flag is featured prominently on all the signs and posters the group puts up in the city. Our Heritage has also reported that it has completed renovations to a home in the Old City, in cooperation with Turkey’s Kanaler Foundation.

Maor Tzemach, chairman of the Lach, Yerushalayim (“For You, Jerusalem”) organization said that “Israel must stop the Our Heritage activity in east Jerusalem. The Turkish group’s activity seeks to disrupt Israeli sovereignty in the city and the unity of Jerusalem.”

Tzemach said he was “calling on decision-makers to stop Turkish activity and not allow Turkey to gain a grip on civilian social life in Jerusalem.”