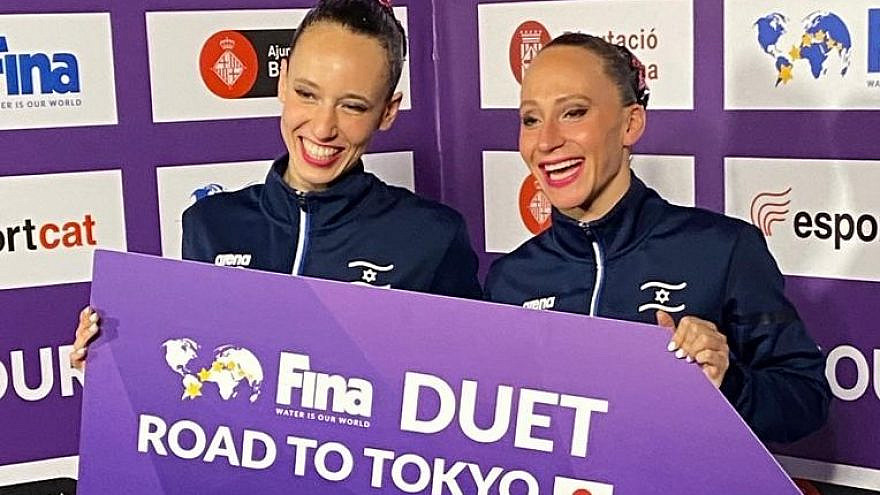 Eden Blecher (left) and Shelly Bobritzky will be among only nine artistic-duet teams to compete in the Tokyo Olympics in July 2021. Credit: Israel Swimming Association/FINA.
Spread the word.
Help JNS grow!
Share now:

(June 14, 2021 / JNS) While two Israeli swimmers took to the podium to await the results in their final qualifying tournament before the 2021 Tokyo Olympics, a broadcaster with a TV station in Spain took the opportunity to make anti-Israel and anti-Semitic remarks. The competition took place from June 10-13 in Barcelona

According to Combat Antisemitism Movement, which posted about it earlier on Monday, “instead of highlighting the achievement of these Israeli athletes, Spanish channel @tv3cat’s commentator blames them for the killing of Palestinians and accused them of serving as a cover for ‘genocide.’ This inciteful rhetoric is a dangerous blood libel.”

Eden Blecher and Shelly Bobritzky, who competed in the artistic-duets category, are ranked sixth after Sunday’s qualifying competition, according to FINA, which oversees several of the aquatic categories internationally.

They will be among nine artistic-duets teams to compete in the Tokyo Olympics in late July.