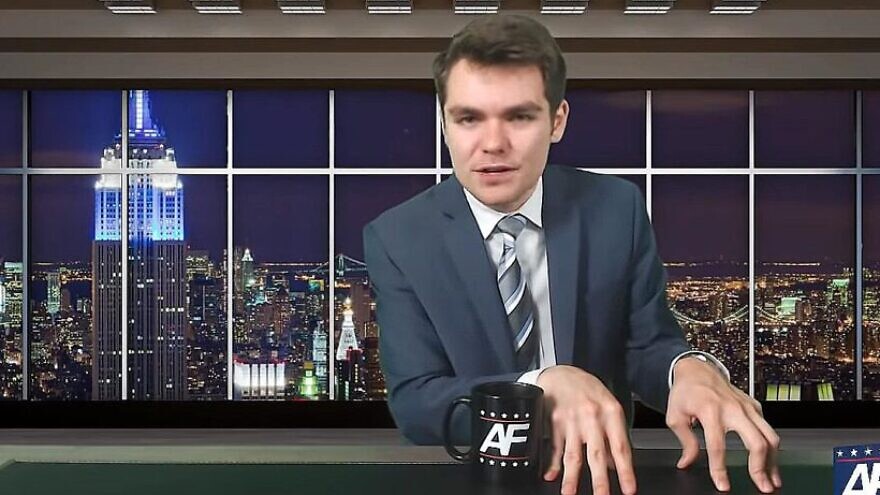 (January 25, 2023 / JNS) White supremacist and Holocaust denier Nick Fuentes has been reinstated on Twitter, despite previous repeated violations of the social media platform’s terms of service. The antisemitic activist announced his return by tweeting a reference to the rapper Ye’s antisemitic threat to go “death con 3” on Jewish people.

“First Neo-Nazi Andrew Anglin. Then Holocaust denier Ryan Dawson. Now white supremacist Nick Fuentes is back on Twitter,” tweeted StopAntisemitism in response to Fuentes’ reinstatement. “This isn’t how you curb hate, Elon Musk, this is helping spread it.”

Fuentes gained notoriety in recent months when Ye, aka Kanye West, took him to the Mar-A-Lago resort in November to meet with former President Donald Trump over dinner. According to Ye, Trump was “very impressed” with Fuentes. Jewish organizations and supporters of the former president, including Israeli Prime Minister Benjamin Netanyahu and the Zionist Organization of America, expressed outrage over the meeting.

“No responsible American, and certainly no former president, should be cavorting with the likes of Nick Fuentes and Kanye West,” tweeted the Trump administration’s former special envoy to monitor and combat antisemitism Elan Carr. “To placate antisemitism is to promote antisemitism. President Trump must condemn these dangerous men and their disgusting and un-American views.”

Earlier this month, Fuentes announced on his telegram channel that more than 1,000 students had signed up for a group dubbed “Students for Ye” within the span of two weeks. Fuentes has become an integral part of Ye’s entourage and his informal 2024 presidential campaign, ever since the rapper has been engaged in a months-long attempt to mainstream antisemitism.

“There is no reason why someone as antisemitic as Nick Fuentes has been rewarded with exponential reach to spew his bigotry on Twitter,” Liora Rez, executive director of StopAntisemitism, told JNS. “Someone who’s been known to incite real acts of violence and spread misinformation about a marginalized group of people should never be given a platform, period.”